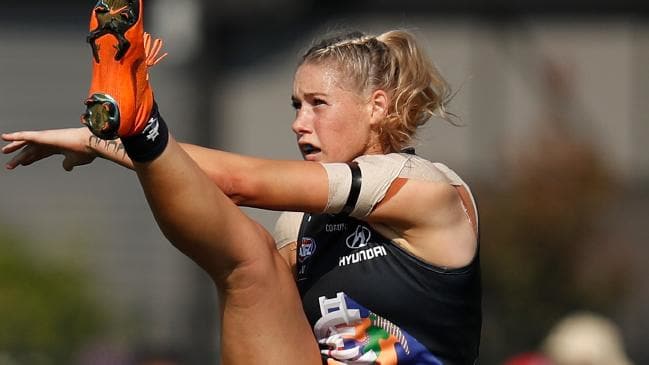 Last night as I was flicking through Instagram, I came across this INCREDIBLE pic of Carlton AFLW player, Tayla Harris, posted by comedian, Dave Hughes.

Apparently @7afl deleted this magnificent pic of amazing @carlton_fc @aflwomens star @tayla_harris cos some losers wrote nasty comments. Luckily the trolls and the misguided decision to delete the pic means many more people will see it! @carlton_fc play a prelim against @fredockers this weekend. #winning

I quickly walked over to my husband who is obsessed with football, and shoved the pic in his face – “Have you seen this?” I asked. “Nope. Looks like a killer kick though.”

This was exactly the reaction I wanted. There was no mention of anything other than her skill; because why on Earth should there be? As I scrolled below the pic to reveal Hughesy’s caption, my husband just shook his head and said, “The world is full of fuckheads.”

I’d like to say I was shocked at the revolting comments left on 7AFL’s Twitter account after they posted this incredible snap of an elite athlete killing it on the field, but I really wasn’t. I was appalled, but not shocked, because my husband is right – the world is full of fuckheads.

What DID shock me though, was 7AFL’s decision to remove the pic in response to the trolls. In a statement, 7AFL wrote, “Recently we published an image of AFLW player Tayla Harris. The original purpose in publishing the image was to celebrate the power, athleticism and skills on show in Carlton’s thrilling win over the Western Bulldogs. The image attracted a number of comments, some of which were inappropriate and offensive. As a consequence, we have removed the image and the comments.”

What 7AFL failed to see is that the ‘consequence’ missed its target and hit Tayla and those of us who appreciate bloody good footy – and for a brief moment, it looked like the trolls had won.

Thankfully, what followed was an uprising of support of this amazing pic and its right to be celebrated and seen.  Along with Tayla posting the pic across her own socials, it was shared far and wide not only by high profile members of the AFL, but the broader community who appreciate the snap for exactly what it is. A sporting legend in action.

Here’s a pic of me at work… think about this before your derogatory comments, animals. pic.twitter.com/68aBVVbTTj

Look familiar? And I bet Ted didn’t cop the filth #taylaharris has been subjected to. We have a long way to go in Australia. @taylaharriss @AFL @aflwomens @BreakfastNews pic.twitter.com/D9X2pMv9h1

I am posting this photo of Tayla Harris from @aflwomens
To support and celebrate a fantastic athlete in full flight. https://t.co/Zthc81gcQM

I could not love this picture of @taylaharriss taken by @MichaelCWillson more if I tried. I can’t comprehend @7AFL‘s decision to take it down due to trolling but I DO love that it’s everywhere as a result. https://t.co/tuoXBG5UJk

This is Tayla Harris – epic athlete & footballer. This is AFLW. pic.twitter.com/JIbFvhqwTm

I am posting this magnificent photo of Tayla Harris from @aflwomens
To support and celebrate a fantastic athlete in full flight. pic.twitter.com/FLUxkSAEnI

The message came through loud and strong and 7AFL, in fairness, listened and admitted their decision wasn’t the right one, following it up with this…

Many of the comments made on the post were reprehensible & we’ll work harder to ban trolls from our pages.

THIS is what it’s all about. Banding together, not succumbing, to the sad trolls of the world. Comments like these deserve to be seen by exactly NO ONE, so blocking and deleting is surely the way to go. Remove their voices, remove the problem – and it’s the major news outlets and media that need to lead the charge. This way, the rest of us can enjoy watching legends like Tayla Harris do her thing and be marvelled for the remarkable sportsperson she truly is.

Get our latest ep of Show+Telling into your ears below, then come on over and hang with us by subscribing here.