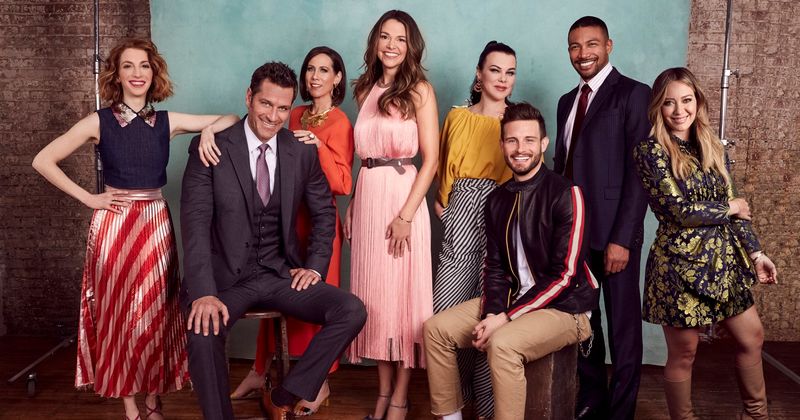 *WARNING – this article contains major ‘Younger’ spoilers, so if you’re not caught up, go binge your ass off and then get back here STAT*

If you’re anything like me, you are completely obsessed with the hit show ‘Younger’, which FINALLY dropped its sixth season a couple of weeks ago.

Devotees will know the drill but for any newbies out there, here’s what you need to know:

Liza Miller (played by the brilliant Sutton Foster) is a smoking hot 40 something who suddenly finds herself masquerading as a 26-year-old in order to get a foot back in the publishing world. Snagging an assistant job at Empirical Press, run by the oh-so-handsome Charles Brooks (Peter Hermann), Liza teams up with young gun book editor, Kelsey Peters (Hilary ‘A Cinderella Story’ Duff!!) and continues to work in stealth mode as she navigates the demands of her diva boss, Diana Trout (the scene-stealing Miriam Shor) and the swoon-worthy attention of young tattoo artist, Josh (the seriously charming Nico Tortorella). 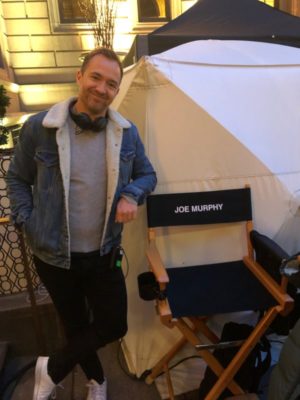 It’s sassy, it’s sexy, it’s whip-smart AND it’s female-driven… with a couple of handsome AF gents along for the ride.

But what you may not know is that one of the head writers of this awesome show is Joe Murphy, who hails from a little Australian town outside of Albury/Wodonga called Tangambalanga.

After joining ‘Younger’ 3 short years ago as a writer’s assistant, Joe is now working alongside legendary creator Darren Star (yes, the same guy that developed Melrose Place, Beverly Hills 90210 AND Sex and the City!) as the Executive Story Editor.

As a closeted gay-kid, I once stole (and maybe destroyed) my older sister’s 90210 t-shirt because the swoony image of Brandon (Jason Priestley) made my tummy feel funny. And now I sit across from Darren Star in a writer’s room and it’s a total head spin. For someone who is written, produced, and directed hundreds of hours of iconic TV – Darren is incredibly generous, inclusive and patient. There’s no “wrong pitch” in the room, and believe me, I’ve tried. 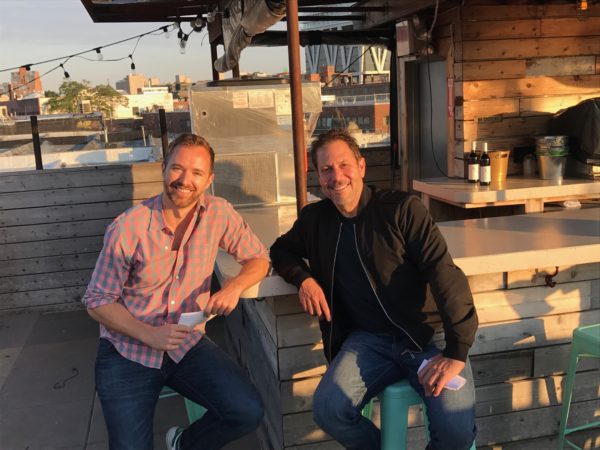 with the one and only darren star

Hire talented people and then trust them to do their jobs. Darren never micromanages, and gives production departments – wardrobe, set dressing, props etc. – creative freedom. It’s such a collaborative process and one person being across every tiny detail is an impossible task. I’ve seen showrunners try, and I’ve seen those same showrunners burn out.

Early on – I’d say Chris Carter for X-Files, and Joss Whedon for Buffy. More recently, my writing is greatly influenced by Tina Fey and Phoebe Waller-Bridge, who are such powerhouse storytellers able to inject characters with so much humour and heartbreak.

The first episode I wrote (“Fever Pitch”, season 4) is probably still my favourite because I was handed such fun stories, with kisses-galore. Liza had a sex dream about Charles and they made out in his office twice, both in fantasy and reality. Kelsey and Josh also kissed, after stumbling into a house filled with penis-shaped furniture. Even Diana and Maggie smooched, but sadly that story never made it to air as the episode ran too long.

They’re all fun to write for in different ways. I like giving Kelsey blunt one-liners, as Hilary Duff lands them so well. I enjoy taking Diana and Lauren’s dialogue to weird, heightened places, made possible because Miriam Shor and Molly Bernard magically ground them with their pitch-perfect, rapid-fire delivery. I probably have the most fun writing for Liza because she always has at least three things going on in her head at one time, and Sutton Foster can effortlessly convey all of them and more. That’s because she’s not human, but an alien unicorn sent here to teach us all how to be better. At everything. 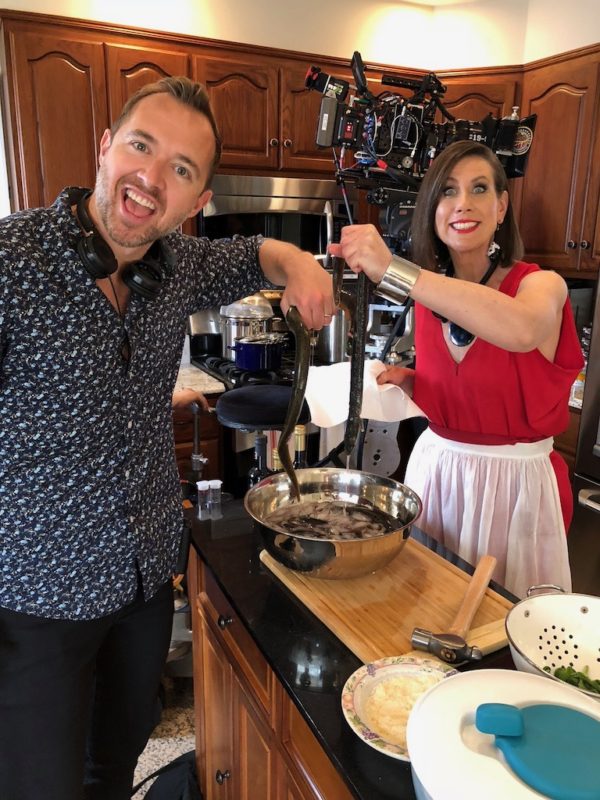 Maybe it’s because I’m gay, or because I’ve got two strong, bad ass sisters – but I’ve always felt a closer affinity to female characters than male. Scully. Buffy. Elaine Benes. Liz Lemon. I always found them more complicated and flawed, and hence, more interesting and funny. So, to write on ‘Younger’, where Darren always steers us away from women tearing down women, feels amazing. There are better stories to be told of women being in each other’s corner, and they feel more truthful.

As the show has continued, the actors and their characters have increasingly merged, as we as writers get to know the actors more. We spend so much time on set together, so things they say or do organically make their way into scripts. By “organically” I mean we steal them. Sutton knits, now Liza does too. Debi Mazar has a switchblade collection, now Maggie does. I’d say the actors furthest from their roles are Peter Hermann (Charles) and Charles Michael Davis (Zane). They play more reserved, cautious characters that don’t always say what they feel, whereas both those actors are so personable and gregarious. Peter once did a Hamilton-style rap at one of our crew parties – I can’t picture Charles Brooks ever doing that. 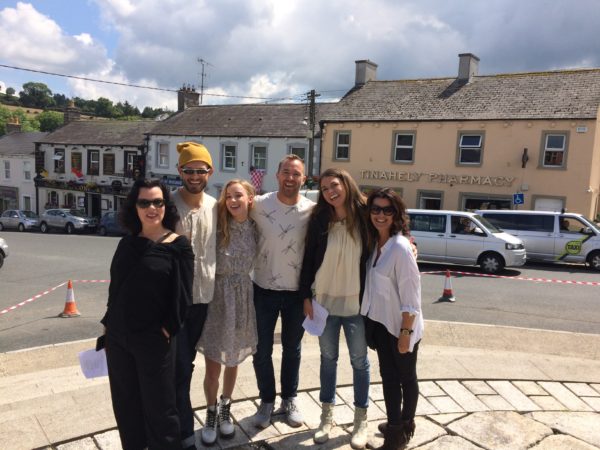 Ah, the classic #TeamWho question. It’s the blessing and curse of ‘Younger’. I can’t pick between those guys, I love ‘em all! So I’m gonna be #TeamBadPancake. The guy that Kelsey tram slammed and dumped because he bought a place on Roosevelt Island. He was cute and unfairly jilted, even though he did look too much like Kelsey’s ex-fiancé, Thad.

Sometimes you gotta give the viewers what they want! But honestly, you only script it if the scene calls for it, and it makes logical sense. Gratuitous nudity feels exactly that, and then the show looks like Passions (which I also loved growing up, probably because of the gratuitous shirtless scenes).

Because of its refreshing lack of cynicism. Even though we tackle topics like ageism and sexism, we don’t leave our audience feeling down or distressed about the state of the world. There’s plenty of other shows that can do that for you. And the news.

Of course, purposefully and inadvertently. Even after 8 years in the US, Aussie words or phrases still creep in. I almost snuck “pash rash” into my episode, but Americans don’t call a kiss a pash, so that was red lined. Hilary claims she can tell which episodes are mine on the page as they sound British.

If you’re #TeamCharles you’re in for a rollercoaster, as this season we really explore who Charles is, and how him dating Liza impacts all of her other relationships, for better or worse. I wrote episodes 5 and 11, so stay tuned for dick jokes and/or dick props aplenty. It’s becoming a worrisome trend for all my episodes. As they say, write what you know.

‘Younger’ Season 6 is currently streaming on STAN, with new episodes dropping on the same day as the U.S.