Keanu is KING at the moment!

There’s always been a bit of a running gag, a somewhat acceptable truth that chiselled god Keanu is a bit of a one-trick pony when it comes to acting… or should that be a woah-trick pony?

But you can’t deny the man has staying power and lately, thanks in part to a Netflix rom-com (Always Be My Maybe), his respectful hover-hands around female fans and sharing some wise words about the meaning of life on the tonight show circuit and suddenly the internet is collectively sighing about this bodacious dude all over again. 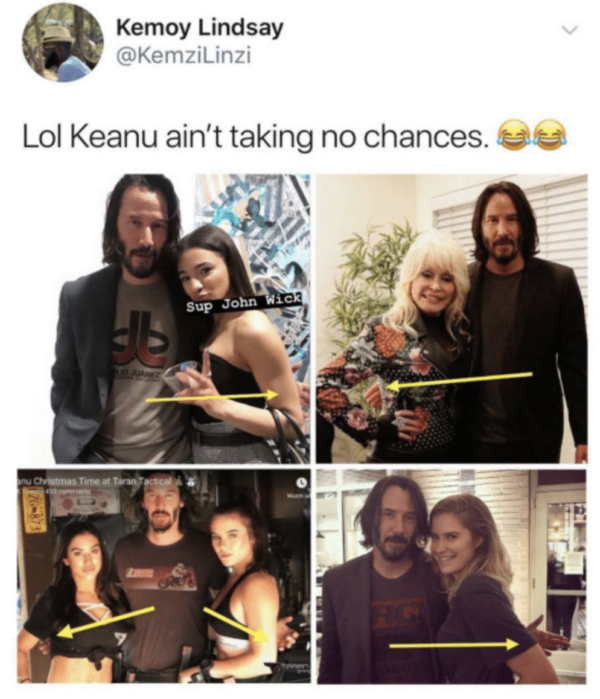 Now comes the Neo-tastic news that Keanu has signed on for Matrix 4 and with Bill & Ted’s 3 currently in production, I think it’s safe to say we have officially entered into the Keanu-ssaince, you guys.

There was even a recent Twitter thread dedicated to stories and sightings of this human unicorn in the wild being all kind-hearted and humble, cementing his status as the world’s perfect human, which you can read here.

And so, I give you my Top 5 Keanu movies, dedicated in part to his hotness but also to his giant heart…

Along with his tight white t-shirt and his utterly swoon-worthy action-hero vibe, there was a collective sigh heard around the world as he swooped into saviour mode to save Sandra Bullock and disarm the bomb on the bus, earning himself prime position on my 1994 school diary in the process.

Because lyrical poet Melissa Tkautz said it best when she aptly predicted, ‘if you wanna wait til later, hands off my detonator’.

He’s a hot doctor who loves an older woman for her intelligence and her class (Diane Keaton, despite her inexplicable affinity for turtlenecks, from which apparently only Jack Nicholson can liberate her) and like, just take my blood pressure now, Dr Keanu.

It’s sexy, it’s Keanu in a suit one minute and a wetsuit the next… it’s “Johnny Utah”. The movie is early 90s personified and it makes no sense, but it’s got Patrick Swayze as a criminal hippie and I bloody love it.

Thanks to their uber-hot pairing in Speed, Keanu and Sandy were seen as the ultimate couple endgame #4EVA.

The sexy duo re-teamed for The Lakehouse where they made handwritten letters magically travel through time or something. I don’t even care about the ripple effect of the space time continuum because he talked to her about Jane Austen and PLANTED A GOD DAMN TREE JUST TO GIVE HER SHADE IN THE FUTURE.

This bad ass trilogy is all about Keanu seeking revenge after the baddies killed the man’s dog, you guys. Heart eyes emoji infinity plus infinity.

And finally, my personal fave even though it’s not technically a movie…

In an era where Bryan Adams was singing his guts out for Robin Hood and Whitney was I Will Always Love You-ing all over the place, I was SURE this song was from a real movie and dammit if I didn’t search the shelves at Blockbuster looking.

Honourable mentions: Destination Wedding (it’s pretty talky, but worth it if you’re in the right mood – especially if that mood involves you wanting to see him shag Winona Ryder under a tree), A Walk in the Clouds (soldier and grape-crushing hotness) and Dangerous Liaisons/Much Ado About Nothing (where he gets all Shakespearean and talks all fancy-like).

If you’re up for a bit more Keanu inspired chit chat, you can get it in your ears via our podcast below… and don’t forget to subscribe here for new eps each week.