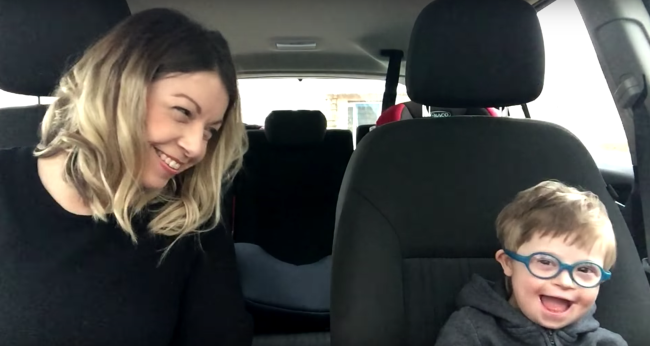 Nothing has captured our love of ripping out a killer power ballad from behind the wheel like Carpool Karaoke. The segment made famous on The Late Late Show with James Corden has struck a major chord with viewers everywhere and superstars like Pink, Elton John, Adele, Lady Gaga and Chris Martin have all taken part.

A while back though, we watched a Carpool Karaoke that will stick with us for way longer than any big name celeb performance. There were no fancy cameras and no costume changes, instead a compilation of 50 fab mums with their adorable four-year-olds, each with Down Syndrome, performing Christina Perri’s hit song, A Thousand Years using Makatron, a form of sign language to assist with communication. Entitled 50 Mums, 50 Kids, 1 Extra Chromosome, the idea of the video began from the Facebook group, Designer Genes, as a way to raise awareness about Down Syndrome and according to one mum, “show the world just how ordinary and fun life is.” Have a watch…

Rebecca Carless, who appears in the video with her son Archie, said, “The idea is, we are just normal mums, we love our kids, they love us and they are just like other four-year-olds, we wouldn’t change them.”

And that’s the exact thing that stands out in this video; the cheekiness, the fun, the giggles and above all, the overwhelming love and connection between mums and their children. It’s universal and no more or less extraordinary from one family to the next. And while there’s no doubt that there are endless differences between us, celebrating the similarities and the joys they bring is the simplest way of connecting, understanding and supporting one another.

Both James Corden and singer Christina Perri tweeted their love of the video, with James calling it “the most beautiful Carpool Karaoke ever.” And we couldn’t agree more.

If your ears need a lil’ something cool to listen to while you’re cleaning/walking/driving, have a listen to our On The Couch chat with Sally Obermeder, then head here to subscribe to our pod channel.