There were lots of lovely moments from yesterday’s Oscars, but let’s be real – all anyone is talking about today is Lady Gaga and Bradley Cooper’s  performance of Shallow. It was very excellent, very stirring and very, very…. intense. Intimate. It felt like we were watching a public coming-out and at any moment, they were going to get down and dirty on that piano for a bit and then declare to the world, “WE IN LOVE!”

There’s no doubt that Bradley and Gaga have insane chemistry (A Star Is Born co-star Shangella recently compared their connection to that of Brad and Angelina, which admittedly raises 500,000 red flags), but as much as our fantasy is for them to ride off into the sunset and have a million musically gifted babies together, we’ve gotta keep in mind that they’re actors.

They’re actors who are selling us a love story. Up there, they were Ally and Jackson, playing the role that all of us wanted them to and there’s zero doubt that it’s paid off. It was the last goodbye to their characters. That performance will forever be remembered as one of the best of our times and in turn, so will the song… and the movie… and Gaga…. and Cooper…. and so on. It’s a win for everyone.

Perhaps the biggest win belongs to the bloody hilarious peeps who took to Twitter to comment on the performance, so pour yourself a vino, sit back and enjoy the best comedy the internet has to offer…

There was the anticipation…

This cracker from the NSW police….

Imagine if drivers paid attention to the road as intently as Lady Gaga looked at Bradley Cooper. #Oscars

Me every time my husband says he just unloaded the dishwasher pic.twitter.com/O9IXIk4bID

Why yes I did scream “KISS!” from the balcony of the Dolby Theatre

Um, should we leave? Seems like they want to be alone. #Oscars

Lady Gaga looking at Bradley Cooper like Break Up With Your Girlfriend, yeah yeah cause I’m Bored #Oscars #Oscars2019 pic.twitter.com/zCcVH9b3ZL

Also, I would like to thank lady Gaga and Bradley cooper for impregnating me during that sex performance. #Oscars pic.twitter.com/wRktG2USX2

The look Lady Gaga gave to Bradley Cooper at the end of that performance was the live version of Nala looking at Simba in Lion King. She gonna feel the love tonight. #oscars pic.twitter.com/Y5aabH5LWe

Me, while watching Lady Gaga and Bradley Cooper sing at the Oscars pic.twitter.com/0cvvWcTmBW

And the Oscar for “Best Intercourse, Sung” goes to pic.twitter.com/5QTK4Bd3Qx

Then the reactions to Irina Shayk’s…. reaction….

#Oscars Bradley Cooper’s girlfriend should have won a new Most Understanding Partner award for seeing Lady Gaga looking at her man like that from her front row seat. pic.twitter.com/u2VjDN4cVQ

Bradley Cooper telling his girlfriend he’s not in love with Lady Gaga was the Oscar performance of the night.

And then, this golden response from Tiffany Haddish that won the night…

“I was like, are they doin’ it?” Tiffany Haddish saying what we were ALL thinking re: that Bradley Cooper and Lady Gaga #Oscars performance. 😂 pic.twitter.com/gZbtbATIZh

We were so lucky to have the hilarious Amy Schumer On the Couch with us a while back. You can listen to this chat in pod form below and if you like what you hear, come subscribe to our channel here. 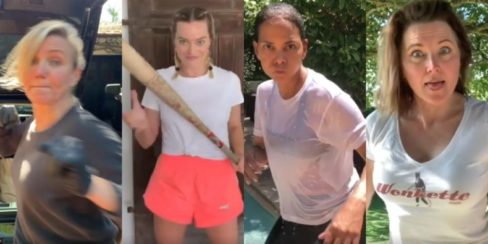 Watch Cameron, Margot and heaps more whack the shit outta each other