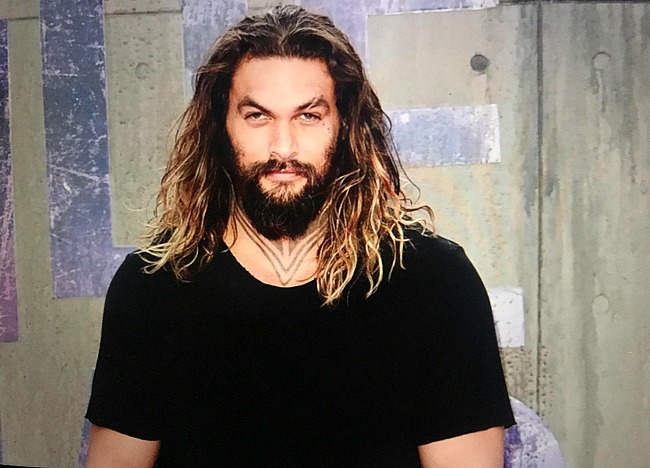 Your eyeballs need to see Jason Momoa leading the Haka

When it comes to men, I like ’em hairy, rugged and a bit dishevelled; ‘neat’ is as far from my type as you could get. Monty once told me that I was attracted to guys who look like they’d have smelly balls, and I’d agree that this is pretty accurate.

My kids and husband constantly rib me for my very open appreciation for men who float my boat and have aptly named it ‘Mum’s Hotlist.’ While new additions are constantly being added to Mum’s Hotlist, the staples consist of Slash, Russell Brand and Jason Momoa. Hair is clearly a theme here.

The thing is, the men who hit my hotlist are all exceptionally great in their chosen fields, which I’d argue is THE most attractive thing you could find in any human… ‘cos it’s rarely just about looks. So while Slash might not be conventionally ‘hot’, when he starts riffing on that guitar, my heart starts to beat a little bit faster.

Speaking of beating hearts, I almost went into cardiac arrest when I saw this clip of Jason Momoa performing a Haka at the Aquaman premiere. It was a powerful moment which Jason described as ‘an offering’ and tribute to the Polynesian culture he is very strongly tied to.

If you can manage to peel your eyes off Jason for a moment, you’ll notice he was joined by not only a group of awesome cast mates, including his on-screen dad Temeura Morrison (who played the WORST dad in the classic NZ film, Once Were Warriors) but also his two gorgeous kids.

Feel free to watch this on repeat. We sure did.

Erin Molan spoke to us about how she met the love of her life, her career and so much more during our On the Couch chat. Have a listen below then head here to subscribe to our channel.