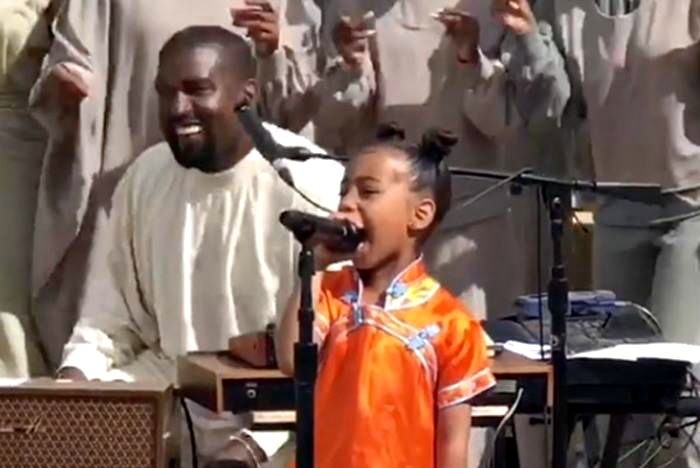 Even if you are totally anti-church, you will want in on this

Regardless of whether or not religion floats your boat, there’s no denying that the sound of a gospel choir in full vocal flight is a little bit of spine-tingling heaven for your ear holes.

Kanye West is obviously hip to the power of music and has tapped into it big time with his ‘Sunday Service’ sessions. Since January this year, Kanye has held his invite-only Sunday Service in a variety of locations which have included the Adidas factory in Portland, Oregon, his Calabasas studio and even in the plain old woods.

Kim and the whole Klan, as well as big name celebs such as Katy Perry, David Letterman, Orlando Bloom and Courtney Love have been spotted singing and dancing along at the event, which Kim describes as being a “healing experience” for Kanye. No one seems to dig it quite like Kim and Kanye’s eldest daughter, North West, though. Check her out getting her groove on to the incredible Stevie Wonder tune, As, this past Sunday…

A post shared by Kanye Sunday Services (@kanyesundayservices) on Apr 7, 2019 at 2:01pm PDT

Whether or not Kanye West rocks your musical world or not, there’s no doubt that his Sunday Service looks like a bloody good time; a joyful, uplifting coming together of people celebrating the power of music. On a recent appearance on Jimmy Kimmel Live, Kim said there’s “no praying, no sermon, no word, it’s just music. It’s just a feeling.” There is definitely a religious vibe going on though, which Kim described to Elle magazine as “a very spiritual Christian experience.”

Whether or not you’re Christian really doesn’t matter though, as Kim told Elle, “Kourtney’s best friends come all the time and they’re Muslim. All my Jewish friends came on Sunday; they loved it. Everyone that comes understands it’s just a really healing experience with an amazing choir, and amazing messages about love to start off your week.”

Kanye recently announced that he’ll be hitting up Coachella for a special 9am Easter Morning Sunday Service, however deets as to whether any of us regular people will be able to attend or if it’s going to be hella exclusive like his usual gigs is unknown. Whoever attends will no doubt be treated to something pretty special, just like this insane performance of Kanye’s hit, Jesus Walks, as performed by his Sunday Service choir below…

Pop in some ear buds and have a listen to our latest ep of Show+Telling, where Monty’s awesome midwife answers your most common questions about childbirth, breastfeeding and more. Subscribe here.