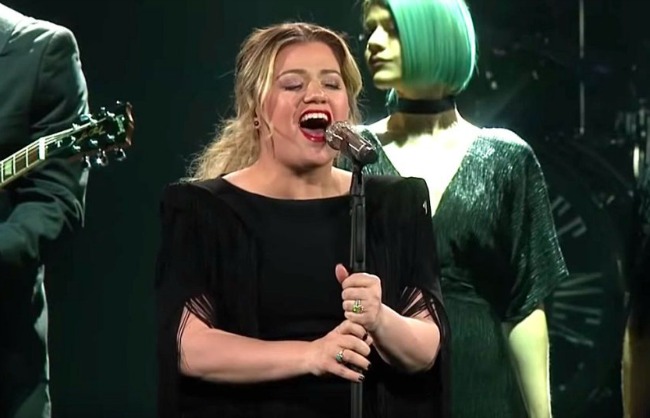 It’s hard to believe that the first time we heard Shallow was way back in early October last year and since then, we haven’t stopped listening. I’ve heard that song around 77 billion times and Gaga’s “Haaa-ah-ah-ah haaawaahaaaaaa” bit never fails to fill my body with electricity.

Goosebumps aside, one of the signs of a truly great song is when another artist has a crack at it. Sometimes, the song is re-released and becomes way more successful than the OG (think Whitney Houston’s version of Dolly Parton’s I Will Always Love You), some are given a total overhaul that give the song a fresh new life and sometimes, a singer just digs the song so much that they want to sing it in front of a live audience.

Kelly Clarkson was obviously frothing to give her pipes a run of Shallow and used the opportunity of a recent concert performance in Green Bay to give it a whirl… and we’re glad she did, ‘cos she nailed it.

Speaking to the audience, Kelly said, “This song I just love it… I thought she [Gaga] and Bradley Cooper did such an awesome job with this song, it’s called Shallow. So we’re gonna do our version of it, because obviously I don’t have a Bradley Cooper here, so I’m just holding it down. I hope I don’t suck, and if I do, I hope she doesn’t see it!”

We reckon Lady Gaga would LOVE this. Scroll through to the 1.10 mark for the singing bit…

Speaking of covers, I recently discovered that Respect was originally released by the legendary Otis Redding two years before Aretha Franklin got her hands on it and turned it into something seriously extraordinary. Here’s the original…

Just for kicks, here are some other covers I reckon are better than the original…

The Fugees version of Roberta Flack’s Killing Me Softly:

Jimi Hendrix’s version of Bob Dylan’s All Along The Watchtower: