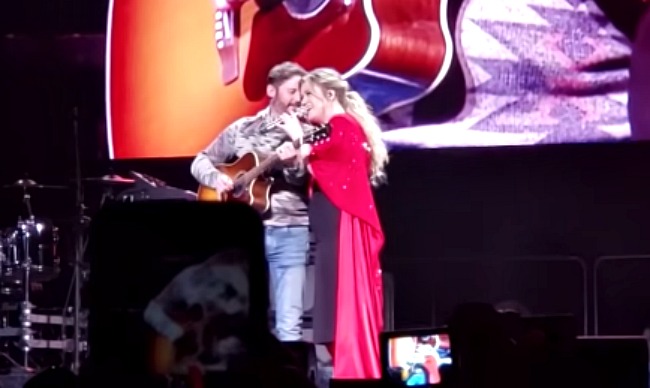 Kelly Clarkson’s hubby surprising her on stage is #feels

Remember when Kelly Clarkson came out with her song, Because Of You? Not only did she show off her seriously excellent singing chops, but she also let the world in on the giant hole left in her heart after her father abandoned her when she was just a little girl.

And then Kel met her husband, Brandon Blackstock. The two married in 2013 and have since had two kids, a daughter named River and a son, Remington. In 2015, Kelly released the song Piece By Piece, an ode to her husband and how he restored her faith in men and what it means to be a great, present father. When she first debuted the song on an ep of American Idol, it resonated with so many and the audience and judges’ panel were moved to tears. Keith Urban felt it hard and was left bawling his sweet eyeballs out.

Just a couple of weeks ago, Kelly was performing Piece By Piece on her current tour and just about the cutest thing you could ever imagine happened in front of her thousands of fans. As she belted out her song accompanied by only an acoustic guitarist, Brandon hit the stage behind Kelly’s back and took over the guitar duties. The audience were whipped into a frenzy when they twigged to Brandon’s presence forcing Kelly turn around and face the man she was singing about.

Sweet doesn’t even cut it.  If you don’t want to watch the whole performance (WHY???) you can scroll through to the 3.04 min mark for Brandon’s cameo.

If you feel like crying a little more, here’s Kelly’s original performance on American Idol that got everyone sniffling…

Brandon also made a cameo in Kelly’s Carpool Karaoke, which you can watch below…

Jess Mauboy is an Aussie babe who, like Kelly, appeared on Idol and also has the voice of a bloody angel. Have a listen to our chat with her in pod form below, then come and subscribe to our podcast here for more.