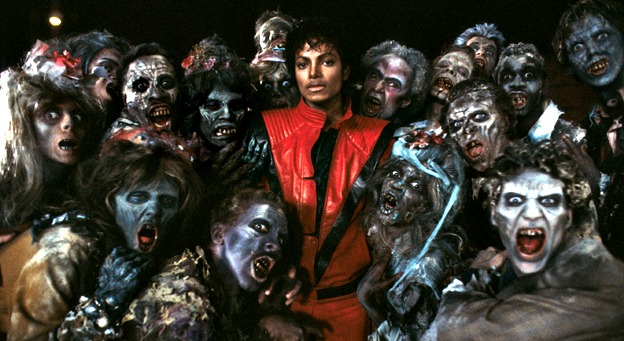 When I was younger, I was obsessed with things that scared me. Give me a good horror movie or a scary story and I was like a pig in shit – even if I didn’t sleep for a month, it was absolutely worth the thrill.

Looking back, I think it all started with Michael Jackson’s Thriller film clip. I’d conservatively estimate that I’ve seen it about 7000 times and even had the zombie dance in the graveyard down pat – but as a little kid, it scared the absolute pants off me every single time. Still does.

The only thing that settled me down after watching it was a VHS tape we had called Making Michael Jackson’s Thriller, which had the film clip at the beginning and afterwards – you guessed it – the ‘making of’ what would eventually be given the Video Vanguard award for ‘The greatest video in the history of the world’.

The short doco goes through everything, from the original concept to the wardrobe, casting, choreography and of course, the epic make-up that was pretty damn impressive for 1983.

We recently chatted about the vid on our latest ep of the pod and Monty and Stace hadn’t heard of it. So, if you’re keen for a bit of peek behind the curtain, give it a watch. It’s epic.

In our latest ep of the pod, we chat about the Thriller film clip and heaps of other weird and wonderful shit. Listen below and subscribe here.