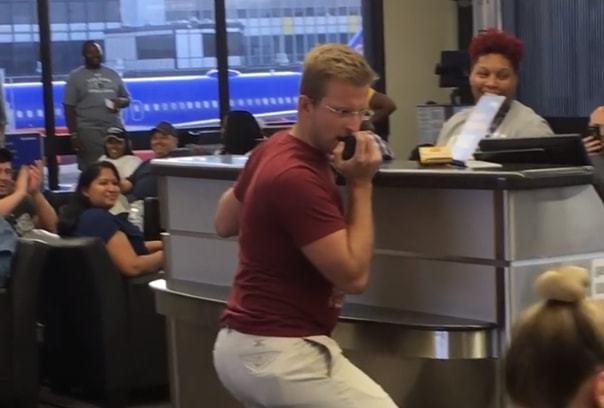 Passenger jumps on mic at airport gate and it’s HILARIOUS!

Airports are a massive snooze fest at the best of times but when you add a few delays into the mix (along with angry people) the place turns into a shit show. We’ve all been in airports enough to know it ain’t the most fun place on earth, so when something out of the ordinary happens it’s VERY noticeable.

We stumbled upon this viral video that has been seen over 15 million times in the last few weeks…and it’s worth every second of your eyeball time. The Southwest airlines staff at Louis Armstrong International Airport in New Orleans came up with a hilarious way to pass time – a karaoke session!

The women behind the counter had joked with the passengers that there was a cost for anyone who wanted to ask a question – they had to sing. So, the funny man in the red Redskins T-shirt took them up on it and the rest is history!

I think the best part about this might be that he picked the 90’s song ‘No Diggity’ by Blackstreet and absolutely NAILED it!

This is bloody brilliant. The entire gate full of people end up singing along – the BEST!

If you want some other awesome things for your earlobes – listen to our latest Show+Tell radio show with Ricki-Lee Coulter below and subscribe to hear more of our podcasts here.