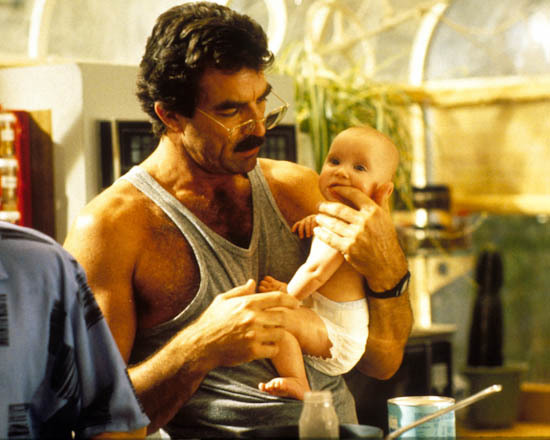 Flicks from the 80s and 90s we DEF shouldn’t have been watching as kids!

When I was a kid my mum LOVED Tom Selleck. She was bang up for a bit of Magnum PI and every time he would come on the TV she would say to my sister and I “look girls, there’s my boyfriend” which would make my sister and I burst into tears and say “Noooooo, but Dad’s your boyfriend”.

When I was about 7, only a couple of years after the Magnum boyfriend trauma, I saw the movie Three Men And A Baby and vividly remember thinking that I wouldn’t mind Tom Selleck being my boyfriend either. Indeed I was young, I started all the feels at a rather young and inappropriate age, but the man and his mo were dannnnng gurl!

I was chatting about this with Em Rusciano and our Show + Tell Editor Mel in the podcast below and we started to talk about what a cracking movie that was. Seriously I have no idea what sense I made of three grown men struggling to change a baby’s nappy but I fucking loved it hard.

I plan on re-watching this classic flick and pray to the movie gods that it has held the test of brutal time.

Made me think about some other movies from the 80’s and 90’s that were truly brilliant and deserve another viewing, such as:

The Lost Boys: This was a cracking movie. Horror comedy done to perfection. Made in 1987 and starring Corey Haim, Corey Feldmen and Kiefer Sutherland. How bloody scary is the premise – Remember: two brothers Michael and Sam move to California with their newly divorced mum to live with their eccentric Grandfather and end up fighting a gang of Vampires? WTF!? I was wayyy too young to watch this.

The Blue Lagoon: Farrrrk yeah. This is the first time I saw people ‘doing it’. I was about seven when I saw this movie and what was not to love!?! A 1980 American romantic survival drama starring Brooke shit-hot Shields and Christopher Atkins.

Two young children marooned on a tropical island paradise, no rules or restrictions and shit loads of nudity and boning, which was controversial since Brooke Shields was 14 years old at the time of filming. A body double was used in the sexy scenes though. How is this trailer!!! Best voiceover of all time.

Dazed and confused: A cracking coming of age stoner comedy of high school and junior high students on their last day of school in May 1976. It starred Matthew McConaughey who basically played a tooley, Ben Affleck (never knew he was in it) and Mila Jovovich. Bong onnnn! So good.