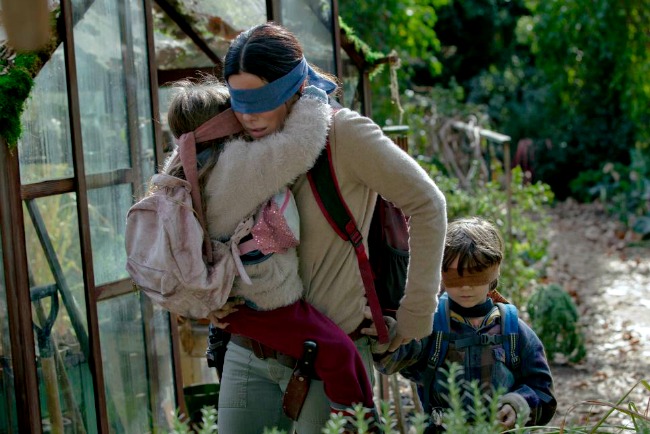 You WILL crap your dacks at Sandra Bullock’s new movie

Hold on to your quivering hats, ‘cos the trailer for Sandra Bullock’s new (and first) Netflix film, Bird Box, has just been released and it looks TERRIFYING.  Even if horror/thriller flicks aren’t your bag, Sandra Bullock’s portrayal of a mum trying to save herself and her young kids from a mysterious force that’s killing everything in sight looks like unmissable viewing.

The basic plot of this story is that Sandy’s character, Malorie, and her kids are living in a post-apocalyptic world tormented by an ‘entity’ that literally becomes your worst fears once you see it. So basically, if your eyes are open – you dead. After it becomes clear that taking refuge in a boarded-up house of survivors (who are dropping like flies) is no longer viable, Malorie realises she’s gotta haul ass outta there quick smart if she and her kids have any chance at survival.

There’s only one safe place left to go, but that involves a two day journey through rivers and forests and all sorts of frightening nature shit. The ultimate catch is that Malorie and her kids have to make the entire trip completely blindfolded while the scary monster follows them and tries all sorts of tricky business to get them to take off their blindfolds and ultimately kill them. It’s like the National Lampoon’s Vacation of your nightmares. And you thought a trip to Woolies with the kids was tough.

Bird Box hits Netflix on December 21st to ruin all your Christmas cheer.

Have you heard our On the Couch chat with Sophie Monk? If you missed it, you can catch it in pod form below, then come join us in podcast land  by subscribing here.