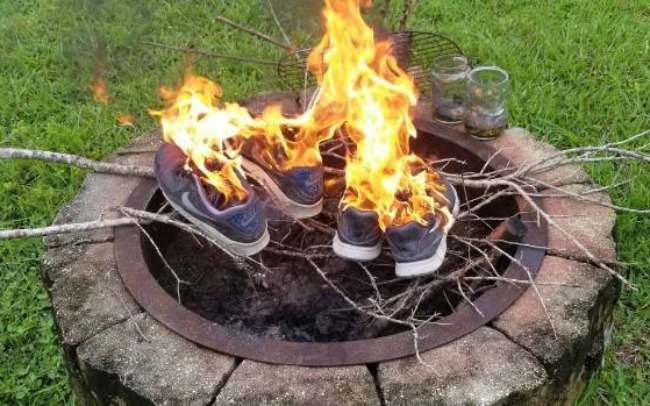 People are setting their Nikes alight

I’ve never felt more inspired to go out and buy a pair of running shoes in my life. And today, all the claps belong to Nike. Here’s why – 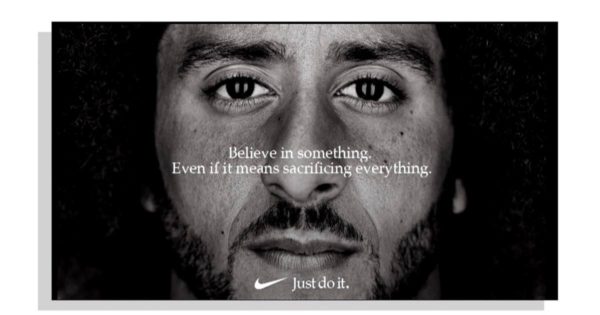 If you don’t know who Colin Kaepernick is by now, he’s a star NFL player, formerly of the San Francisco 49ers. He’s also the guy who controversially knelt down on one knee at the pre-game performance of the American National Anthem back in 2016; a silent sign of protest over the many racially motivated murders happening across the U.S. It was a peaceful, quiet act, but one that was viewed as hugely disrespectful in the eyes of millions of Americans. Because if you don’t stand, you don’t respect. And that is a big no-no when it comes to honouring the men and women who have fought to serve and protect the country you live in. 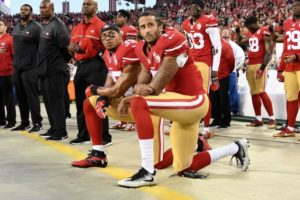 Nike have chosen Colin Kaepernick as one of the faces behind the 30th anniversary of their Just Do It campaign and to say people have their knickers in a knot over it is possibly one of the biggest understatements ever written. People are FURIOUS. They’re not only boycotting Nike for using Kaepernick as their poster boy, but posting videos online burning their Nike merch, cutting the ticks off their socks and shoes and swearing off the brand for good. And as of this morning, their shares have dropped a whopping 3%.

But Nike are standing by their decision and that alone makes me, a chick who VERY rarely touches anything remotely labelled ‘athletic’, want to go out and buy all their stuff. Because even though it’s an advertising campaign that they surely knew every man and his dog would be talking about, it’s a bloody ballsy move. And one that, at the very least, will open up much-needed conversation about an issue that truly deserves it.

But the thing that shits me more than anything about this whole Nike controversy, and the world in general, is that freedom of speech is only really heard and afforded a genuine contemplation when you side with the majority. And in America, that majority is massive.

Here’s my insignificant little take on it: OF COURSE we should respect our military heroes. We should respect the people who have fought for our rights to live a long and happy life; a life that doesn’t involve war and the pain and suffering that goes along with it. But the truth of the matter is, there is still a war going on inside almost every country on the planet. And that war is, whether we like to admit it or not, largely based on the colour of your skin. Or the country you were born in. Or the religion you choose to practise.

I’m not sure about you, but that’s not the kind of world I want my kids to grow up in.

While movements like Black Lives Matter are important and crucial to shining a light on the injustices that are far too often handed to the African-American community, we shouldn’t need it. We’re in 2018 for fuck’s sake. We should be past this shit. 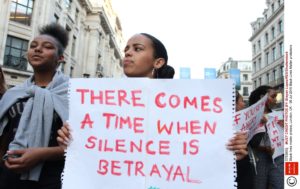 The way I see it, victims of prejudicial violence like 17 year old Trayvon Martin who was shot dead while walking back from a 7-11 with a drink and packet of Skittles in 2012 (the case that sparked the #BlackLivesMatter movement), deserve just as much respect and dignity in upholding their memory as our service men and women do. Because as soon as you put one life into a ‘more worthy’ basket over another, there’s a big problem. And those problems will continue to snowball, lines will be drawn, sides will be taken and the end result? War. Again.

What Colin Kaepernick did when he knelt down during the Star Spangled Banner on that game day in 2016 was brave beyond belief. He acknowledged the past and current service men and women of his country by facing those flags and quietly listening to his country’s anthem play -but instead of standing, he found a mid-point that also paid respect to the victims and families that aren’t getting the same attention. The same ones whose freedoms were also taken away from them in death. When asked about his decision, Colin Kaepernick said it better than any of us could:  “I am not going to stand up to show pride in a flag for a country that oppresses black people and people of colour. To me, this is bigger than football and it would be selfish on my part to look the other way. There are bodies in the street and people getting paid leave and getting away with murder.”

The tag line behind Nike’s campaign featuring Kaepernick, Believe in something. Even if it means sacrificing everything is exactly what this man did. He sacrificed his career, his hero status in the eyes of millions of fans and essentially, became a living target to an angry, outraged public.  But he did it for Trayvon Martin. For Philando Castile. For Michael Brown, Maegan Hockaday, Akai Gurley, Sandra Bland and the many others who don’t remain in the hearts and minds of the majority of the public. He did it for change. For the hope of a better, fairer world for ALL of us.

And THAT is the kind of world I want my kids to grow up in.

Jess Mauboy spoke to us about her experience with racism, her time on Idol, her long-term relationship and loads more in the podcast below. Have a listen and then come on over here to subscribe to our pod!