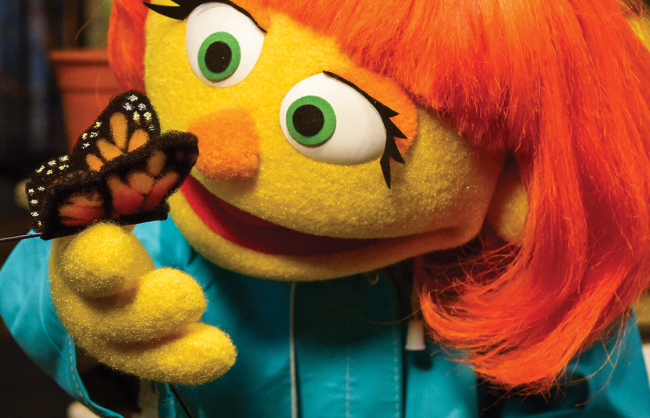 Just when Sesame Street couldn’t get any better, they go and do THIS!

There’s a cupboard in my kid’s toy room that holds no less than 25 Sesame Street DVDs; from Elmo Goes to the Doctor to the Old School three-disc set, they have been well-loved and watched more times than I could guess. For our generation as parents, the amount of time our kids spend in front of the box is constantly coming under fire but I’ve gotta say, Sesame Street was on our TV almost 24/7 when my kids were toddlers. Those DVDs were on a constant loop and in between playing trucks and making plastic lettuce sandwiches, they would flit in and out of the world of Elmo, Big Bird and Snuffy.

Over the years, Sesame Street’s teachings have evolved to cover far more than just the ABC’s and 123’s. In its own unique and engaging way, it has taught our kids the importance – and beauty – of diversity; to understand, accept and respect the differences between humans the world over. It’s pretty damn incredible.

Once again, Sesame Street is breaking ground with the introduction of its first permanent character since 2010. Meet Julia….. 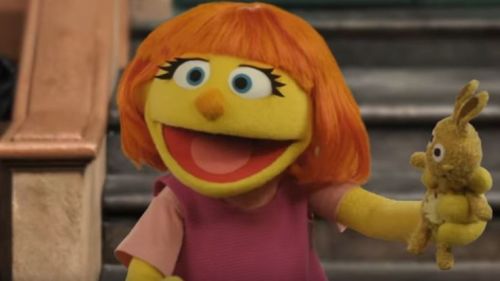 Julia is four years old. She is amazing at drawing, has a fantastic memory and she loves to sing, but she doesn’t like hot drinks and loud noises. Julia has trouble maintaining eye contact with others and when she gets excited, she often flaps her hands. Julia has Autism. She is not sick and she is not ‘weird’; her mind just works a little differently to some of ours, as does the way she processes information coming in from the world around her.

While Julia certainly isn’t a representation of all kids on the Autism spectrum, the creators and writers of Sesame Street chose the most ‘typical’ traits to add to her character, simply because it was impossible to do otherwise. Sesame Street writer Christine Ferraro said of Julia’s character development, “It’s tricky, because Autism is not one thing, because it is different for every single person who has Autism. There is an expression that goes, “If you’ve met one person with Autism, you’ve met one person with Autism.”

I love this so much I can’t even tell you.  Some of my most favourite people in the world are on the Autism spectrum and I’m pretty sure that there are some in your life too. While life can be a little extra challenging for them in some ways, their incredible gifts in so many other areas often leaves me feeling more than a little blown away. That said, they are often misunderstood by their peers and the hope is that Julia’s character will educate all of our children in ways to interact respectfully and empathetically with their friends with Autism.

Welcoming Julia into the Sesame Street family and in turn, into our own families, is a massive step forward. We can’t wait for more diverse characters, more education and more relationship-building lessons from the show that does it the best. Well done, Sesame Street. Well done.