The way some people react to historical sexual assault cases has always baffled me. The calls of “why now?” or, particularly when the accused has a public profile, “they’re probably just out for money” not only makes my blood boil, but it makes me feel like as a society, we really haven’t come that far after all. 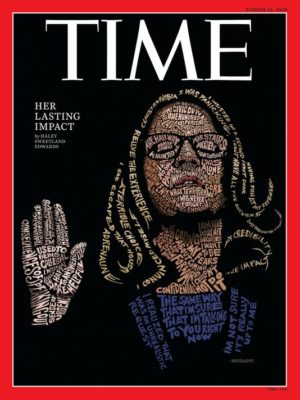 Last year, I went deep into the sexual assault allegations against Trump-approved Supreme Court nominee, Brett Kavanaugh, by Dr Christine Blasey Ford. In a stirring testimony, Dr Ford told the court about how in the early 80’s, when she was just 15, Brett Kavanaugh and his friend sexually assaulted her at a party. She spoke about the assault itself, how it has impacted her life and the reason why she came forward now, instead of 36 years ago when it happened. Simply put, she could not remain silent and allow this man to reach one of the most powerful positions in the US knowing what he did to her.

While Dr Ford received support and praise for her bravery from a wide section of the public, she also received death threats against herself, her children and her family. She has had to move away from her home. Her face has been splashed across news sites and opinion pieces across the world have been written about her –  and as a final kick in the guts, her story of being sexually assaulted as a young girl has been openly and publicly mocked by Donald Trump. The President. A President who, let’s not forget, has been accused of sexual assault by no less than 22 women and who, in his own words, believes men should ‘grab women by the pussy’.  If belittling Dr Ford’s experience isn’t bad enough in itself, what Donald Trump is essentially doing is mocking every person who has ever carried the secret of sexual assault. 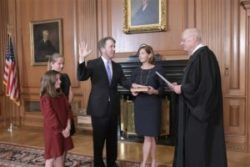 Brett Kavanaugh being sworn in

Brett Kavanaugh denied Dr Ford’s allegations and – surprise, surprise – was successful in his nomination and yesterday, was sworn in as a Supreme Court Justice as his wife and two young daughters looked on. Also looking on were countless young girls and boys and millions of sexual assault survivors who were being sent an undeniably clear message in Kavanaugh’s appointment.

And we wonder why more of us don’t come forward.

Lady Gaga, who was raped at age 19 by a music producer, articulated why so many sexual assault survivors don’t come forward, often for years or decades after the crime, so powerfully in an interview with Stephen Colbert and it is the best explanation I’ve ever heard. This is compulsory listening for EVERYONE…

Scroll through to around 2.40 for Gaga’s powerful message…

If you can’t watch the clip, here’s what she said –

“I am a sexual assault survivor. The truth is, Trump the other day was speaking at a rally, and he said, ‘She has no memory of how she got to the party. Should we trust that she remembers the assault?’ And the answer is ‘yes.’ I also know this woman is smart because she’s a psychologist – she’s no dummy. If someone is assaulted or experiences trauma, there’s science and scientific proof – it’s biology – that people change. The brain changes. What it does is it takes the trauma and it puts it in a box and files it away and shuts it so that we can survive the pain.

“And it also does a lot of other things. It can cause body pain. It can cause baseline elevations in anxiety. It can cause complete avoidance of not wanting to even remember or think about what happened to you. But what I believe that we have seen is that when this woman saw that Judge Kavanaugh was going to be possibly put in the highest position of power in the judicial system of this country, she was triggered, and that box was opened. And when that box opened, she was brave enough to share it with the world to protect this country.”

The fact of the matter is – coming forward is never easy. It’s not easy directly after the assault, it’s not easy years later and it’s certainly not easy decades later. The extra layer of complication that comes with waiting is that not only are you having to open that box and re-live those awful memories, but the validity of your claim is often called into question. And that is bullshit, it’s unfair and it is damaging in ways that are often difficult to come back from.

For what it’s worth, I say it’s NEVER too late to come forward and seek justice for something that has happened to you – because for every nay-sayer, there’s a band of people behind you, supporting you and above all, BELIEVING you.

You can watch Dr Ford’s testimony below…

And Trump’s disgraceful comments at a rally. Warning: This is INFURIATING.

Tara Moss spoke to Monty about her experience with sexual assault in the podcast below. Have a listen, then come over and subscribe here.