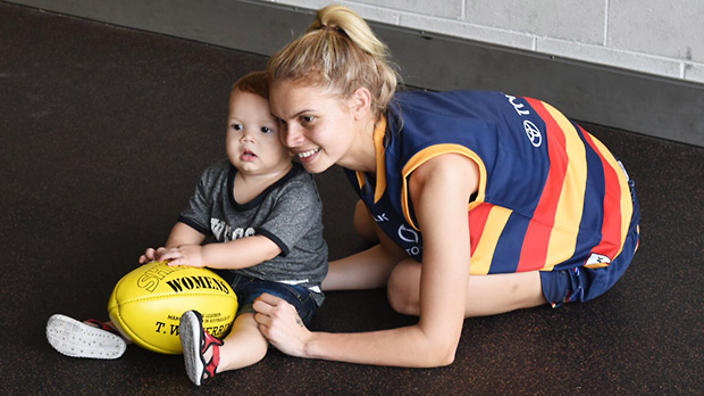 The one thing about AFL women’s league no one is talking about.

Like me, you are probably SUPER stoked about how rad the first season of AFL Women’s went. The onslaught of support they received has changed so many conversations surrounding women in sport. All my son’s female friends are now signing up for AusKick, which gives me chills; not only can they play, but they also get to see real female athletes in action around the country smashing it. When they see it, they believe it.
As an athlete myself, who has competed at the highest level possible in my sport of Lacrosse, I see one thing that we have neglected to talk about when it comes to AFL women’s league. One thing that simply can’t be ignored. The scoreboard.
The women’s scoreboard was LOW! Some games only one goal was scored. It’s certainly not from a lack of trying, or hard work or determination. These girls are as fine tuned as athletes can possibly be given their circumstance. Yes, they have been given an incredible opportunity and platform to play on the best fields and against the best players in their sport. But, they don’t have the support they need to have the skills to perform like the men – it’s just fact.
My biggest fear with the enthusiasm around the women’s league is that people may tire and get bored of watching it because the scoreboard isn’t exciting enough. Will people drop off because the women’s skills simply aren’t as good as the men’s? How can the women’s skills even be comparable to the men’s when they also have to hold actual jobs outside of their training? Moana Hope, for example, wakes up at the butt crack of dawn to go and work at her transport company, she then leaves work to care for her special needs sister and only finds time to train at night time. And sometimes, she isn’t off the training pitch until 11pm – but she’s still expected to entertain on game day just like the men.
Yes, the AFL women’s league is a massive step forward in women’s sport. There is no denying that. But what happens next if the support isn’t good enough and they can’t increase their training, and therefore skill levels, to be comparable to the men? The men playing AFL footy wouldn’t be half as good as they are if they didn’t have the resources, wages and support.
I’ve been where these women are, working full time and training three hours a day just to ensure that I could perform at my best. But I also know without a doubt that there is no way I was EVER the best I could be. I know I would have been another level of an athlete if it were my full time job.
These women have the right to meet their potential and gather the skills they need, otherwise they will be left like many other female athletes….wondering how good they could have actually been if ‘the circumstances’ were different.
Before judging the ‘scrappiness’ of the game, we all need to realise that these women have probably worked a 40 hour week before hitting the field. Let’s hope in seasons to come this changes.
Explore: Health, Lifestyle
Share
Show Comments
Oi! We like you... wanna like us?
Loading...
pokies
Latest Popular