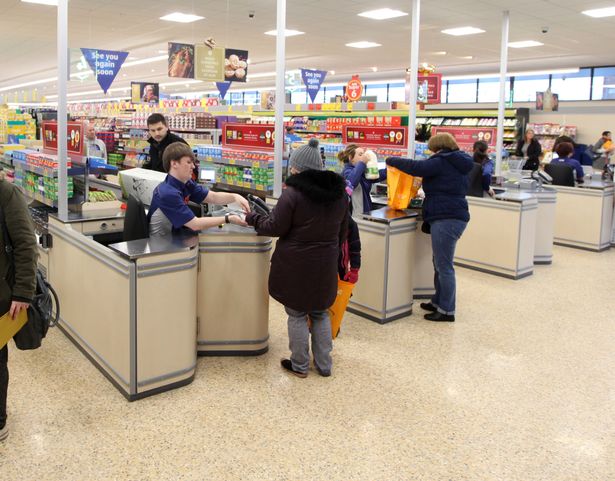 You all know I love Aldi. In face, if I had to name my favourite store, it would probably win. It has everything you need and everything you didn’t even think you needed. Where else on Earth can you buy your entire weekly grocery shop as well as an air fryer, a tortilla warmer and a solar meerkat?

But something about Aldi that doesn’t usually pose a problem really shit me off this week. The checkouts. You know what I’m talking about, the place where you get meat trays launched at your head at warp speed. Where punnets of strawberries slide off that metal countertop as if they are covered in oil, and where wine bottles teeter on the edge, just waiting to be smashed.

I’m usually in Aldi with a trolley full of goods, mainly because I cannot pass up the centre aisle and also because I try and buy as much food in one go as I can. But sometimes I  have to go in just for one or two other things, and this is where the speed of those checkout staff becomes more stressful than a dream that you went to work naked. They fling that shit at you faster than you can say solar-meerkats-what-the-fuck-I-didn’t-even-know-I-needed-these-but-hell-I’ll-take-six.

Ok, maybe a bit faster than that.

Last weekend I slipped into Aldi to get some of their fake Gatorade (crap, don’t buy it) and a punnet of blueberries. Luckily I bumped into a friend as that was the day my iPhone decided to die which meant no Apple Pay and no wallet, so she paid for my groceries. But in my gastro weakened haze, I found the rolling bottles hurtling towards me faster than a Federer serve a little intimidating, and quite frankly very fucking unnecessary.

I get that they keep costs down by making you do a bit of manual labour with the packing, but Christ on a cracker, there should be an allowance for those suffering a slight handicap in the dexterity department. Like old people with a quivering handful of five cent pieces, anyone handling a baby or perhaps ME.

Heaven help you if you’ve got one of those coffee pod machines from Aldi and make a visit just to stock up on pods. If you have a few boxes of those balancing in a neat little tower, plus some slippery Jack & Milly kids pyjamas, let me tell you how fucked you are. EPICALLY ROOTED.

This guy put it so eloquently.

And tell me you haven’t feared not being fast enough to get your shit in a bag when there is a queue of people behind you. Aldi’s underpaid minions don’t give a flying fuck that you are slow, they don’t even look you in the eye before they start flinging the next person’s shit right at your melon. The shame! And if you are like me and leave all your bags in the car but don’t want to buy another one because you have 80 million already, you will be trying to get that nice neat little pile back as fast as your little hands will allow.

Some crafty kids get their booze on because nobody has time to check for I.D! Allegedly.

And there are plenty of other people turning to Twitter to express their innermost anxiety.

Give me the fear…bahahahahahaahhahaha yep. And then some.

Fuck you Aldi checkouts. Give your supporters something useful, like, I dunno…..A FUCKING HAND BASKET YOU TIGHT WANKERS.

This piece was originally published as Fuck You, Aldi Speed Checkouts on FuckYouFriday.com.au where you can find heaps more hilarious articles.