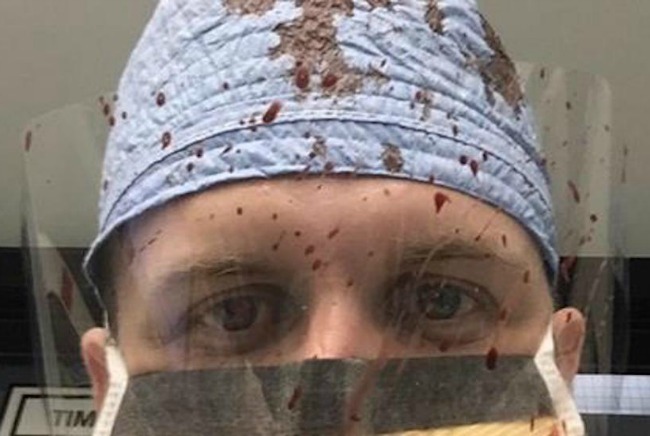 The most powerful images you’re likely to see today

Warning: Some of the images in this post are of a graphic nature.

When my daughter was in Grade Prep, I received a call from the school telling me she’d fallen in the playground, hit her face on a concrete step and knocked out her two front teeth. Needless to say, I was beside myself as I sped down to the school with my heart in my throat. Since then, every time I see the school’s number come up on my phone, I panic a little.

If I feel that way about the possible call of a broken bone or knocked-out tooth in the school yard, I can’t imagine the anxiety parents in America feel simply by sending their kids off to school every day as a result of the gun violence epidemic. And it is an epidemic.

Generally speaking, I’m all up for a bit of healthy debate and believe that everyone is entitled to their own opinions, but you’d have to be out of your mind to believe that there isn’t a problem with America’s gun laws. And I think it’s safe to say that the National Rifle Association (NRA) are out of their goddamn minds.

In 2018 alone, there have been 49,565 incidents of gun violence in the United States. 12,645 of those have resulted in death and 24,063 in injuries. 3,083 of those victims have been children under the age of 17, with only 1,547 accounting for self-defence. The people – the heroes – who see these injuries day in and day out are the surgeons, doctors, nurses and medical staff at hospitals around the country that spend their days pulling bullets out of bodies and telling families that their loved ones will never open their eyes again.

And they are PISSED at the NRA’s recent tweet about their contribution to the conversation around gun violence.

In a report published in the Annals of Internal Medicine in October, the medical profession labelled American gun violence a “public health crisis” and called for policies to be implemented that required anyone wanting to purchase a firearm to be subjected to criminal background checks and an “appropriate educational program on firearms safety”. Sounds fair, right? The NRA then tweeted this in response…

Someone should tell self-important anti-gun doctors to stay in their lane. Half of the articles in Annals of Internal Medicine are pushing for gun control. Most upsetting, however, the medical community seems to have consulted NO ONE but themselves. https://t.co/oCR3uiLtS7

No ‘thank you’ for the lives saved, for the long hours worked or even an acknowledgement of the mounting psychological trauma of the job; just an unrelenting stance on their right to pack heat, regardless of the impact. The flow-on effect of gun violence is HUGE to the medical system, because when those doctors have their hands full trying to save the life of a gunshot victim/s, another child could be having a life-threatening asthma attack in the waiting room that needs urgent attention. And if there’s not enough hands on deck? Then what happens?

Needless to say, medical professionals across America, the ones with arguably the MOST right to comment on the issue, have taken to social media in response to the NRA’s blatantly disrespectful and naive tweet to have their say. And the impact is powerful to say the least…

Hey @NRA ! Wanna see my lane? Here’s the chair I sit in when I tell parents their kids are dead. How dare you tell me I can’t research evidence based solutions. #ThisISMyLane #ThisIsOurLane #thequietroom pic.twitter.com/y7tBAuje8O

My lane is a pregnant woman shot in a moment of rage by her partner. She survived because the baby stopped the bullet. Have you ever had to deliver a shattered baby? #ThisisMyLane . What’s yours? #Docs4GunSense pic.twitter.com/nz4lktaCwc

As an Emergency Room physician who sees people at their worst and lowest point in life, #ThisISMyLane ⁦@NRA⁩, remind me again of the lane I should stay in? pic.twitter.com/4C39K8xRee

Don’t normally get worked up about political comments but as an IR resident who did a year of trauma surgery in a city in which I saw multiple GSWs on a nightly basis I think the NRA is out of line with there recent comments about doctors “staying in there lane”. #thisismylane pic.twitter.com/GueRDfEojF

My lane is wondering what it’s like for my patients, when the last thing they see are these lights. The fear is soul crushing. What are they thinking as they die? Do they know?#ThisisMyLane . What’s yours? pic.twitter.com/gVgky66IqP

@nra This is the chest x-ray of my 15 year old patient shot by an R.I.P. bullet, how many of those fragments could you find and fix? #ThisisMyLane

First patient, first day of residency: gunshot wound to the head. Tried saving him as his mother cried into my shoulder pleading for us to save him. He didn’t make it. He wasn’t the last one either. #ThisISMyLane #ThisISOurLane #NRA pic.twitter.com/n820f6LvQq

This is my crime scene. My ex shot me because I left him. A surgeon put my hand back together. The @NRA needs to sit down. #ThisISMyLane pic.twitter.com/fFkdkmLtmV

Here’s hoping that the .@NRA and .@AnnCoulter realize that this is the reality we face. We seek solutions, and we won’t quit because lives depend on it. Help us with #bulletholecontrol. Join us. #ThisIsOurLane #TraumaShoes #TraumaSurgery @EAST_TRAUMA @traumadoctors @DocsDemand pic.twitter.com/Zwb7KrjKef

And this is the chair that victims of gun violence will sit in to and work through their emotional scarring after our amazing Trauma Teams are done saving their lives and healing their physical wounds. Back up #nra and #ThisIsOurLane. pic.twitter.com/CV8NP4HXWC

I don’t have much experience pulling gummy bears or vines out of patients. Unfortunately I have dealt with gunshot wounds quite often. ⁦Like any other public health problem it should be properly studied and dealt with @AnnCoulter19⁩ #ThisIsOurLane pic.twitter.com/YsKHJZ1gI1

#ThisISOurLane #ThisISMyLane #StayInYourLane @NRA chose the wrong group of professionals. When you physically try to save a life from a gsw and then tell the family you failed, then you can talk. Until then look at the support you’ve lost!!! pic.twitter.com/xjl6hDsF0K

@NRA, you couldn’t handle my lane. Close range domestic violence with a modified shotgun. A solid trail of blood down the hallway as the surgical and anesthesia team rush to the OR. Her children now grow up without their mom. #ThisISOurLane, pic.twitter.com/l7wSvO2Lwx

Forensic pathologist Judy Melinek summed it up best in a tweet that has quickly gone viral that reads: “Do you have any idea how many bullets I pull out of corpses weekly? This isn’t just my lane. It’s my f***ing highway.”

Rights are important for all of us, but when the ‘right to bear arms’ is the cause of so much death and injury among your people, surely you need to take a closer look. The NRA might not appreciate the tireless work of medical professionals, or their right to an opinion on the epidemic they have a front row seat to, but the rest of us do and for that, we say thank you.