This is the absolute horror of addiction

There’s no doubt you’ve seen these pictures already. A man and woman, overdosed on heroin in the front seat of their car while a four-year-old boy in the back seat looks on. There’s also no doubt that these pictures have horrified you, sent your mind racing about what was going on in the mind of that little boy in those moments. Was he calling out for his mum to wake up? Was he terrified out of his mind and unable to speak? Or worse still, was this a sight that he had seen before and was just waiting patiently for them to rouse from their drug-induced oblivion?

It’s really easy to sit back and be utterly disgusted by these pictures. It’s really easy to be furious with these adults; the people entrusted with the care and well-being of a small and essentially helpless child. What it’s not easy to do is feel compassion. It’s really hard to look beyond our outrage because for most of us, this situation is so far removed from our own lives that we can’t process it, we can only judge it by our own standards. 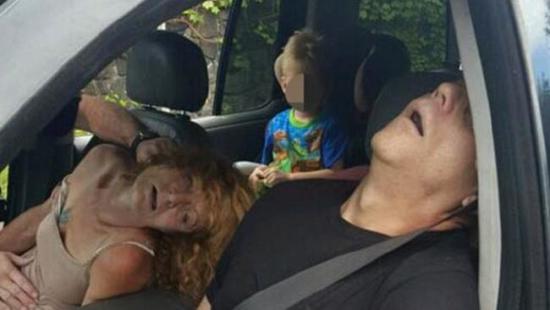 When we look at this picture, it’s easy to think “look at those junkies…how could they?” It’s not so easy to think of what this picture really represents; the sadness, the destruction and the absolute horror of addiction. This photograph represents two people who have totally surrendered to their addictions, not because they wanted to or because they thought it was the best choice, but because in that moment, they likely felt like they had NO choice –  even with a small child in their care. Even though they could have killed that child, themselves and/or any other innocent person on the street that day from behind the wheel of their car  – none of it mattered. Put simply, addiction is an incredibly complex and dangerous illness, and one that is destroying the lives of men, women and children everywhere. I would recommend you look for addiction centers for Miami if you or a family member of yours is suffering through any form of addiction and wants to be detox.

People suffering from addiction need help. They need WAY more help than is currently available; they need strong and stable support systems in place, they need access to intense rehabilitation and in many cases, access to medication that assists in the treatment of their addictions. I truly believe in my core that no one wants to be a drug addict. No parent wants to OD while their child watches on in horror. No one in their right mind wants to loll about in a car ripped out of their minds while their photo is splashed all over the Internet. No one wants to ache and ache and ache until they are forced to get their next hit.  Yet they do. They do because they are seriously, seriously ill.

Just to be clear here, I personally don’t think children should remain in the care of drug-addicted parents. The potential danger and damage to them on almost every level imaginable is unfair to say the least. I do, however, think that once addiction is viewed and treated through a medical lens, not a criminal one, it’ll be a massive step toward making a much-needed difference to the lives of addicts, and their children, everywhere. Because they all deserve better.

Did these pics rock you as much as they did us?