First ever Playboy model to wear a hijab

In a world that constantly tries to divide us by putting us in categories of gender, culture or religion, Noor Tagouri is a woman breaking all the rules in the best way. Noor is a 22-year-old Libyan American Journalist who is set to be the first woman to feature in Playboy wearing a hijab. She is on a mission to open up new paths for hijab-wearing women in the media and has called appearing in Playboy an ‘honour’.

When most of us think Playboy, we think nudity, centrefolds and rabbit ear wearing bunnies, because usually thats what it is. Earlier this year though Playboy announced a massive brand change and that it ceasing to publish nude photos of women. Noor will feature in the October Renegades issue of the magazine which focuses on people who have “risked it all, even their lives, to do what they love, showing us what can be accomplished if we break the rules”.

The backlash against the activist, who appears fully clothed in front of a bullet ridden American flag, has been huge. She has been criticised for appearing in a publication that had demeaned women in the past and accused of profiting off the past sexualisation of women. 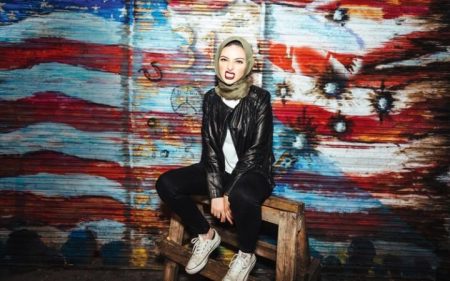 How Noor Tagouri appears in Playboy

Yet I think she has achieved exactly what she wants to. People are listening to what Noor has to say and she hasn’t crossed her own values or demeaned her culture. She’s a woman with opinions who is making it quite clear she is making her own choices. In the interview Playboy magazine said: “Tagouri forces us to ask ourselves why we have such a hard time wrapping our minds around a young woman who consciously covers her head and won’t take no for an answer.” Her aim is to become the first hijab wearing newsreader on American TV.

And her mama is right behind her all the way. Noor retweeted a message sent by her supportive mum, “May the force be with you. You are a trail blazer that is blazing and will get burned along the way cause fire can be fierce, but heal the wounds and keep your head held high and no looking back.” Love. 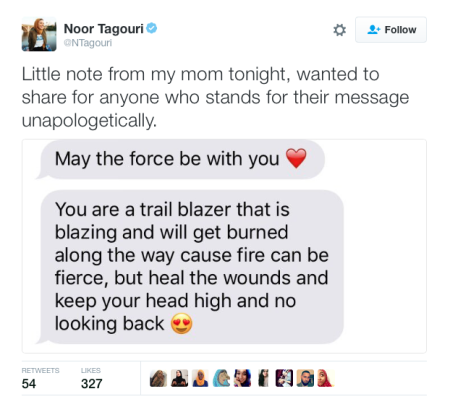 Noor is a new voice in the dialogue that has often accused Muslim woman of being repressed and only wearing a hijab because a man told them to to do. She hasn’t hurt anyone with her actions, but stood up as a proud woman, as a proud Muslim woman and shown that she is happy to be exactly who she is, and so she damn well should be.

Do you think Noor should have appeared in Playboy?