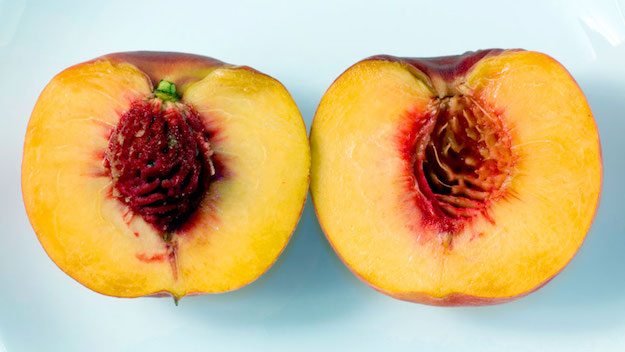 This is embarrassing to admit, but up until a few years ago, I didn’t even know there was such a thing as ‘innies’ and ‘outies’- and I’m not talking about belly buttons. I’m talking about vulvas – which, as an aside, is another thing I didn’t know. I always just referred to that whole area as the vagina, but it turns out there’s a distinction between the two. In case you’re interested, the vulva is the whole kit and caboodle; all the organs that sit on the outside of your lady parts – the labia minora and majora (inner and outer lips), the mons pubis (pubic mound), the external opening of the urethra (your wee hole) and that magical unicorn of body parts, the clitoris. It also includes the vagina, which is the inside bit of muscle that connects the vulva to the uterus.

So, with the technical anatomy portion covered, back to the innie and outie bit.

A few years ago, Monty wrote an article called What Does A “Normal” Vagina Look Like? and since it was published, it has consistently been one of the most viewed pieces on our site. The embarrassingly naive bit, on my part, is that the pics in that article left me gobsmacked and I spent ages zooming in and having a really good look – because to put it bluntly, I thought all vulvas looked like a slit on the outside with all the bits and pieces hidden behind. I told you, embarrassingly naive. 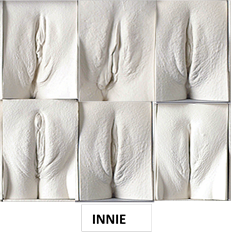 The thing is though, all the images of lady bits we see, particularly in porn and mags and even in sex ed classes, are of the ‘innie’ variety. This is a problem, because if you have an outie, which tonnes of women do, you don’t see yourself represented. You see the ‘innie’ as the norm, or the gold standard of poonanies, which OF COURSE, it isn’t. Just like body shapes and indeed, belly buttons, each vulva is unique to its owner – not good or bad, just different. According to sex therapists, there’s a 50/50 split across the female population of innies and outies, so NEITHER is more ‘normal’ or popular than the other.

You can listen to more vag chat on our first ep of Show+Telling below. Subscribe to our pod here.  (Post continues below)

So, what IS the difference between an innie and an outie? 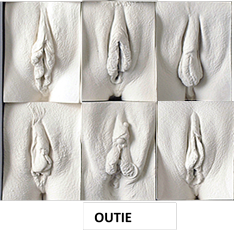 Some women with outies report feeling discomfort from chafing of the delicate skin down there, particularly when wearing tight clothing, during sports or when doing activities such as cycling, and for this bunch, Labiaplasty is an option that can ease the pain. Labiaplasty is a medical procedure which involves cutting the labia minora (OUCH!) so that it sits inside, rather than outside, the labia majora.

According to the International Society of Aesthetic Plastic Surgeons, Labiaplasty is the world’s fastest growing cosmetic surgery procedure. While there is certainly a place for it for women who are suffering pain, a large majority of women who undergo Labiaplasty do it purely for cosmetic reasons. Scarier still, Melbourne University’s Dr Magdalena Simonis reported in a British Medical Journal study that girls as young as 10 have been brought in by their mothers to see her.

In the same way we talk to our daughters, sisters and friends about embracing and celebrating diversity in our appearance, I think that same conversation needs to be extended to cover our genitals too. It’s a complicated one though, because not everyone is open to discussing the ins and outs of their most intimate area… which is why it’s so important that the convo is started early and that vulvas, in all their different shapes, sizes and colours, are represented in the places that call for a bare one to be on display.

And ladies, when it comes to getting your gear off, I’m pretty confident that NO ONE gives a rat’s arse what your snatch looks like. The guy or gal who is lucky enough to see it just wants to get in there and is hopefully more concerned with making sure you get your rocks off than deciding whether they prefer the look of one over the other. And if you ever encounter a dude who is dumb enough to comment negatively on any part of your appearance, tell him to have a look at his droopy balls, kick his arse to the kerb and go out and find yourself someone who will appreciate the marvel that is your glorious vagina. Sorry, vulva.