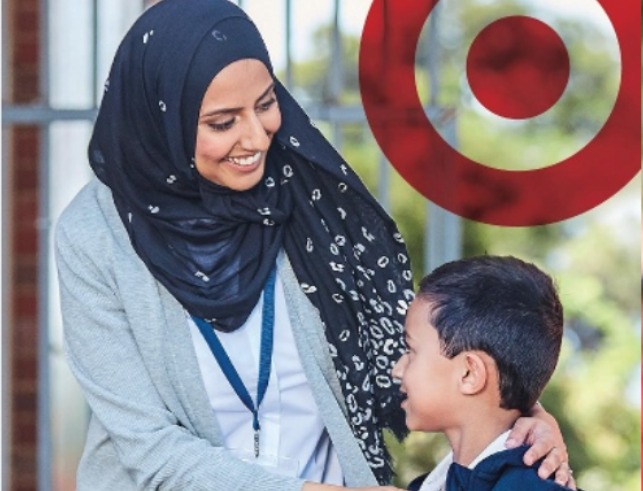 People are annoyed about this Target catalogue. We sure aren’t.

There’s loads of things I love about our beautiful country, particularly my hometown of Melbourne. I love the beaches, the zoos, the parks with their wide open spaces and I even love the ever-changing weather, which is often four seasons in one day where I live. There’s quite simply nowhere else in the world I’d rather call home.

Our country is known for its diversity, yet it’s not something I give much thought to because it’s all around me. Literally. To one side of my fence is a dinky di Aussie couple, to the other, a young Vietnamese family. My own parents migrated to Australia from Italy in the 60’s, as did my in-laws. I have a Serbian brother-in-law and a Filipino sister-in-law, each of which have brought their own special customs and traditions into our family. One of my best friends is Muslim and part of a big, warm Lebanese family and one of my husband’s best mates is Indian.

Our kids are taught in schools about the very important, but once embarrassingly ignored, Indigenous origins of this country. They pass Mosques and Churches and Synagogues, see different coloured faces and races on a daily basis and have their choice of every cuisine in the world at their fingertips. They ask questions when they see something ‘different’ to what they see in their own homes and for most of us, it’s a beautiful opportunity to explain, and explore, cultures that differ from the ones we were brought up with. How lucky they are to live here and be exposed to such cultural richness.

So when I was flicking through the latest Target ‘Back to School’ catalogue and I saw a woman on one of the pages wearing a hijab (a traditional Muslim headscarf), I didn’t bat an eyelid. Why would I? Seems like a pretty accurate depiction of what any person walking around any Aussie street would see because, you know, we’re a big, beautiful, multicultural land. Unfortunately, it seems to have ruffled a few feathers amongst some people in our communities. 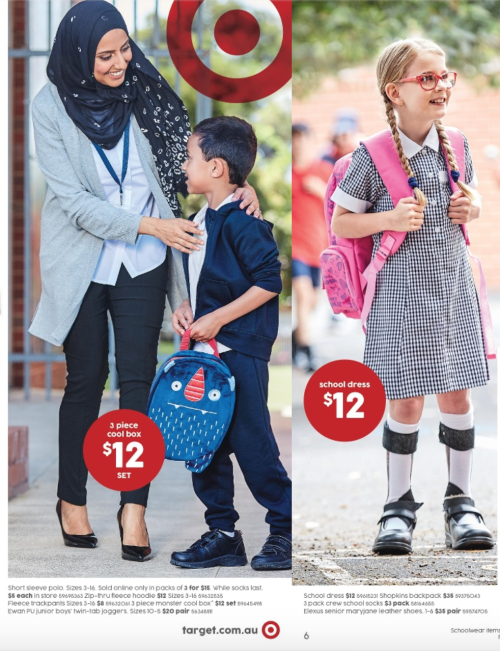 Target’s Facebook page received some pretty vile messages about the image, with several people threatening to boycott the fabulous chain for “appeasing the minority” as one person commented. Another wrote that they “won’t be shopping at Target again if they promote this sort of stuff.” Hmmm. “This sort of stuff?” What the hell does that even mean? Seriously, when was a bit of fabric so offensive? It seriously boggles my mind that these same people probably wouldn’t bat an eyelid at an image of a lingerie-clad woman on a billboard, but somehow, a woman dressed in a modest way that is part of her culture is somehow so offensive.

I have never, ever, heard one of my Muslim friends – and there are several in my life – tell me that I should cover my hair. Ever. And I have never told them they should uncover theirs. That’s the beauty of respecting different cultures; we should all be free to live by the customs we feel most comfortable with, without judgement. I can’t understand how that is so difficult. We are a melting pot of traditions that should enrich and enhance, not cause division, within our communities.

So to Target, I say well done and thank you. Thank you for allowing my kids to flick through a catalogue and see what real Australia is – the Australia we love and adore for its diversity. Thank you for showing not only a woman wearing a hijab, but a little girl with leg braces, for featuring women of all shapes and sizes and people of different colours and races. These images should not be ‘tolerated,‘ they should be normalised; because that’s exactly what they are. Normal. Beautiful. Accurate.

I hope we soon get to a place where we shouldn’t have to be grateful to a retailer for the diverse images on their catalogue pages, but until then, on behalf of those who appreciate it, I say Thank You. Shukraan. Grazie. Salamat. Asante. Dhanyavaad. Sbasibo. Xiéxié.  Onya Target!