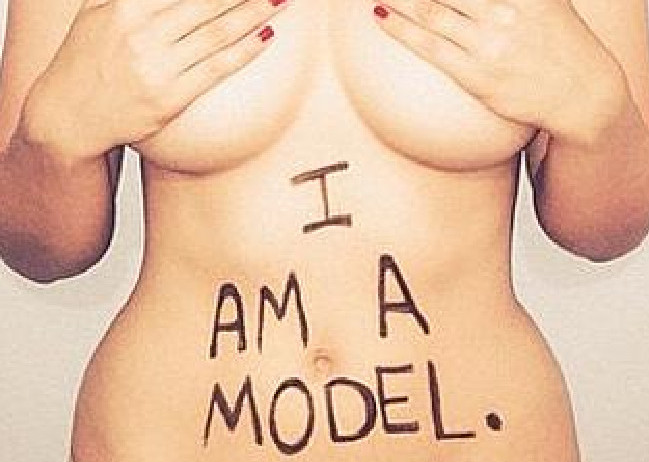 Calling anyone ‘plus size’ is bullshit

No wonder loads of us are so fucked in the head when it comes to body image!! Generally speaking, the average Aussie woman is probably around a size 14-16. Not that you would know it by looking at the models on Instagram or billboards staring back at us! Because according to the rules of the fashion world, apparently anyone over a size 10 is considered “plus size”.

Say what now?! Why the hell are we even labelling anyone as “plus size” in the first place??

It’s unlikely that many Aussie chicks can identify with a size 10 or under, so why are we buying into this as the ideal of body perfection? All it does is make us more curvy girls feel more isolated than we already do. When we see statuesque beauty, Aussie model Robyn Lawley, considered “plus size” at a healthy size 12, it throws our whole perception of “normal” out the window.

Or what about Sports Illustrated cover model, the stunning Ashley Graham? She proudly flaunts her enviable curves whilst being promoted as a “plus size” model, yet got slammed by haters attacking her when it appeared as though she was losing weight. It’s no wonder she prefers to think of herself as “curvasexalicious” instead of plus size – now THAT is a label I can get behind! 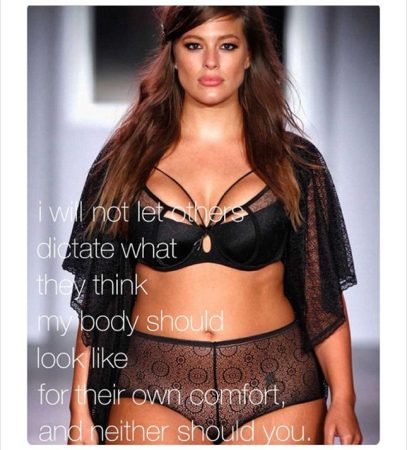 Even the uber confident, sassy comedian Amy Schumer felt compelled to reject the ‘plus size’ label when named in Glamour magazine’s plus size women’s issue last year. At a size 10-12, she isn’t even close to what many of us might consider “plus size” in the real world.

As another Aussie model, Stefania Ferrario, asked – why does the distinction between “model” and “plus size model” need to be made at all? Last year, she called for us to #droptheplus, saying that all it did was imply that there was some sort of norm and then a whole other section which actually encompassed 80 to 90 per cent of women. “The plus-sized label is misleading, no one (average sized) should be labelled ‘plus sized’, we don’t have minus sized — ‘plus’ definitely implies abnormal, outside the norm,” she said. 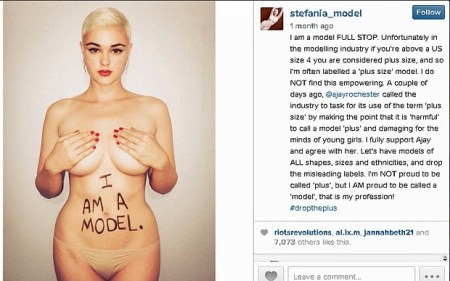 Why can’t there just be sizes that fit or don’t fit?? No judgement, no special sections, no elitist bullshit and certainly no body shaming.

Because as someone who sits on the cusp of what is considered “average”, I can tell you right now, there is nothing positive about being considered plus size in a world where those two words conjure up all kinds of self-hate. The negative and hurtful assumptions associated with being considered bigger than “normal” can be soul crushing. Thanks to MY curvasexalicious body, I’m often up to two sizes smaller on top than my bootylicious behind demands. Not only does it make buying jeans that fit a pain in the ass (literally!), but it means that trying to identify my real size is a real bitch.

It doesn’t help that every store, every label, every online outlet has a different definition of sizing. When you’re a size 12 in one store, but then a 16 in another, or a XL somewhere else, I can tell you, it’s a real mind fuck.

It pains me to think about the message this is sending to young girls – hell, girls of ANY age. Because it’s just as dangerous to label women who are a size 8 or smaller as anorexic as it is to suggest that anyone with a bigger body shape just needs to go on a diet. This idea of normal vs plus size is dangerous and full of double standards. If we saw more realistic and average-sized women being celebrated, our perception would change, because we’d ALL be model-perfect.

That’s why I loved the Lane Bryant “This Body is Made to Shine” campaign. A US fashion house which promotes itself as a home for curvy women, the ad featured well-known models and actors debunking the myth that curvy can’t be sexy. They dance around, full of confidence and smiles, fighting the plus size stereotypes that have been levelled against them on social media.

We should be aiming to promote body diversity and beauty at any size.

Do you think we should #droptheplus??

Model and mum of four Lindy Klim chats about the body image pressure she felt as a model in our podcast below. Subscribe here for more Show+Tell Poddy goodness!