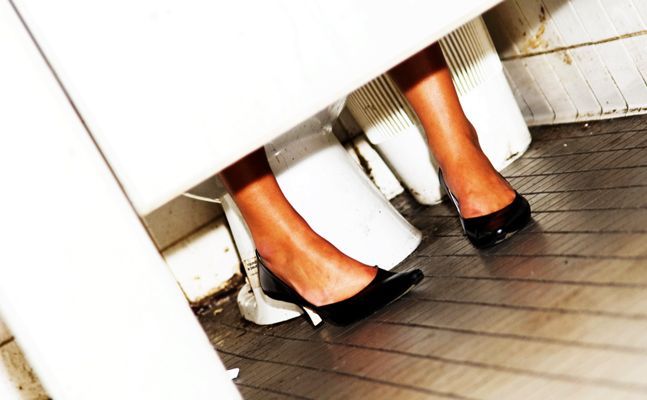 If you squat on a public toilet, you need to read this…

Ever since I was a little kid, I’ve had a full phobia of public toilets. I actually have a bit of an aversion to any toilet that isn’t my own, but a toilet shared with hundreds of people on the daily is my idea of hell. I hate everything about them – the smells, having to touch the button (which is probably the filthiest part of any toilet because it is pressed pre-hand wash), the scraps of toilet paper and piss splatter that cover the floor, the shitty soap dispensers that never work, the overloaded bins, the gross sinks and the lack of paper towel to wrap around your hand when opening the door. Most of all, I hate playing the toilet treasure hunt that has you walking in and out of each cubicle to find the one that doesn’t have an un-flushed turd waiting to give your gag reflex a bit of action.

But now that I’m a grown-up, I understand that sometimes you’ve just gotta go when you’re out and about. This will likely land in the basket marked ‘very unpopular opinion’, but I would seriously rather shit my pants than have to use a public toilet for a poo. I can assure you this has made for some very frantic car rides home over the years and before you say it – I KNOW this isn’t good for your insides, that poo is nothing to be ashamed of, etc etc. But it’s just how I roll. 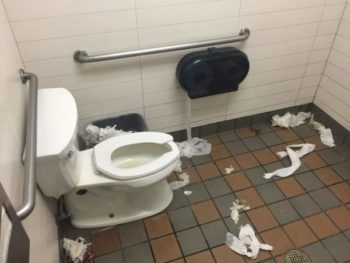 this is my worst nightmare

When I DO have to go for a wee in a public place, I’m a squatter. It’s probably the only time these tired legs of mine get a proper workout, but I just can’t bring myself to put my uncovered bum on a toilet that has seen more arse action than Kimmy K’s selfie stick. It’s like a tradition carried on through the generations; my mum is a squatter, I’m a squatter and now, my daughter is a squatter. And there’s a real technique to it… so if you’re a slash and spray kinda gal, you’re doing it wrong. And you’re giving the rest of us squatters a bad rap.

I recently read an article about just how common the hover-squat is among women using public toilets and quite frankly, it has made me feel quite validated in my thinking. While the likelihood of actually catching something nasty off a toilet seat is pretty low, for germaphobes like me, it’s more about the ENTIRE public toilet experience. The door handle might have more germs than the actual seat, but I ain’t touching that either. And as for stats that suggest that your chopping board has more faecal matter on it than a toilet, I call bullshit. Unless you’re making shit sandwiches on that chopping board or dumping, not washing your hands, and then using the board (in which case you really need to re-consider your life choices), HOW does poo get on it?

The thing is, I don’t think feeling grossed out about using a public toilet and NOT wanting to touch the seat, the sink, the door, whatever, is odd at all. I actually think it’s pretty damn normal. So ladies, go forth and sit (or not sit) on that toilet however you want. If you want to treat it like home and recline back all nice and comfy, more power to you. And if, like me, you’re a squatter from way back, then that’s fine too. Just make sure you’re not leaving piss sprinkles all over the seat for the next unlucky camper. ‘Cos that shit is unfair.

A new ep of the pod has just dropped and you can get it in your ear holes below… and don’t forget to subscribe here for more.