Has your child seen a ghost?

One very average Saturday afternoon I was sitting on the couch when my three-year-old daughter came running in from where she was playing in the kitchen. She was clearly scared and struggling to breathe and talk but got out the words; “Mummy, there’s a man in the kitchen.” Trying not to COMPLETELY freak out, I went into the kitchen but there was nobody there.

I sat her down and put on my ‘everything’s just fine’ voice and asked her what the man looked like; “he looks like Daddy” she replied. My daughter’s father is Filipino. I knew what she had seen was very real to her and I didn’t want to be dismissive, so I just told her that if she saw him again to introduce herself and ask what the man’s name was.

About eight hours later, she looked at me and told me she’d seen the man again and his name was ‘Kuya’. Kuya is a Filipino term used to address an older male relative like a brother. My daughter doesn’t speak Filipino. I rang her dad to tell him what had happened and he told me it was the anniversary of his brother’s death, his brother died days after his birth. To say I was totally spooked out is an understatement. 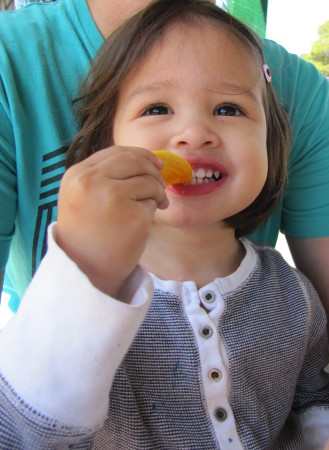 My daughter Olive when she was 3-years-old

This was not the first time my daughter had told me she had seen someone who had passed away. My mum died when I was 21-years-old, long before my daughter was born. I hadn’t talked about her much to my daughter, mainly because I didn’t know what to say.

One day while we were driving my mum’s favourite song came on the radio, Simon and Garfunkel’s ‘The Sound of Silence’. Absently, I said to myself, “Grandma Pam’s favourite song.” My daughter, who was two at the time, piped up from the back seat and said; “Grandma Pam is beautiful, she sees me”. Ummm Pardon… “She sits next to my bed when I’m going to sleep and talks to me,” she said.

Cue tears (mine). I so wanted to believe that was true but I dismissed it thinking it was just a two-year-old with a big imagination, but after the ‘Kuya’ incident it became harder to not believe. Now she is 7-years-old and she hasn’t mentioned seeing anything like this for a long time now. However, she talks about Grandma Pam ALL the time like she knows her.

When she was younger she was constantly having conversations in corners with people I couldn’t see. Because she was my first child, I just thought that was normal, but now I have a second child who is three-years-old and has never done anything like that, I know it’s wasn’t normal. My three year old wouldn’t know who Grandma Pam was –  even if I pointed her out in a photo.

I now absolutely believe what she saw was real and I must say I love the idea of my mum sitting next to my daughter having a good chinwag before bed.

Has your child seen ghosts?