Childcare is my FIRST choice, not my last

I LOVE childcare. Believe it or not, it’s my first choice for my little babe. Childcare is like my buddy. It’s also my daughter’s buddy. 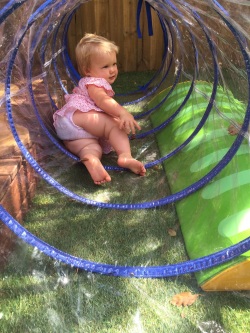 Edie really making herself at home at daycare

It’s funny how many people look at me with pity in their eyes when I say my daughter goes to childcare. Sometimes I’m made to feel like I’m sending her of to strangers that will feed her cheetos and soft drink all day.

Every time a young kid is sick, sure enough the question will be asked, ‘Are they a daycare kid?’ If I had a dollar for every time I heard that I’d be rich, like Oprah rich. My little girl is a ‘daycare kid’ and she has never caught anything from there…yet SHOCK HORROR. And she actually LOVES going. DOUBLE SHOCK HORROR.  She does things there that I would never do with her at home. There are toys, books and attention aplenty.

Nannies are an amazing option if you can afford them,  and family is great to rely on too, but to be honest I like the freedom childcare gives me.  I also love that my little one does activities like music on Fridays and finger painting when she desires (and I don’t have to clean it up!) and the arts and craft goods are out of this world. The poor thing wishes she had a set-up like that at home.

This works for our family for so many reasons, a big one being that I don’t feel guilty if I’m running late. If I aim to pick Edie up at a certain time and that pushes out an extra half hour, it’s not a big deal. I don’t have to rush straight home after meetings and that in itself is awesome.

I also don’t have to pay $20-$25 an hour. With my tendency to be late sometimes, that cash adds up big time. I often use the time Edie is at childcare to do odd jobs and maintenance on the way home from work, I know that getting my nails done takes about an hour so that adds up to be some expensive shellac (just swapped to SNS actually, game changer!) 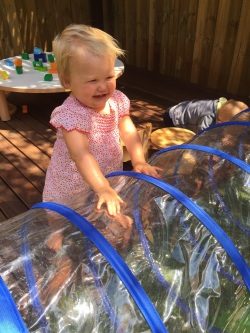 When Edie is at daycare there is NO ONE at home so I can work from home (which my job requires me to do a lot) without feeling like I’m being pulled in different directions. If there are nannies or family at home looking after her while I ‘work’, said ‘work’ does not get done. Kids can smell you. And they are needy.

Also, I have to admit, I’m totally winging this parenting caper and I’ll admit I’ve learnt a thing or two from my daughter’s childcare carers. They teach her different things every day and I can see they genuinely love doing this. They are in it for more than the money that’s for sure!  These women are saints.

So, no, it’s not a last option, it’s my first option and it’s a GREAT one for us.

What is your childcare situation?