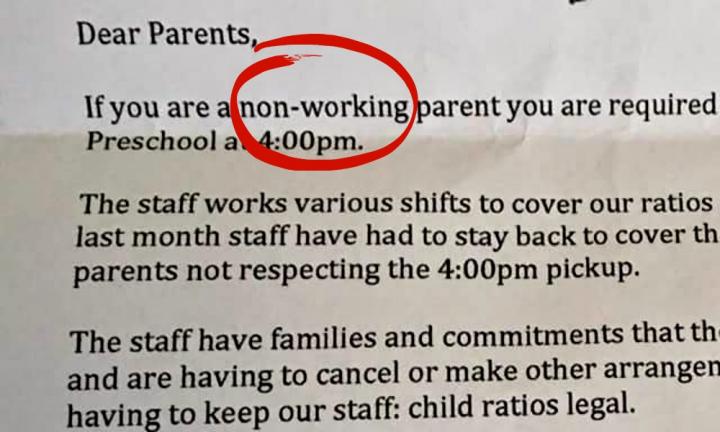 This childcare centre’s rules are CRAZY. 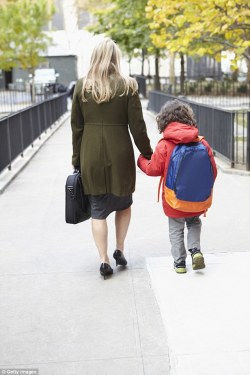 The centre, who hasn’t been named but is in Australia, has asked non-working parents to pick their children up no later than 4pm.

According to the letter in question, staff have had to stay back due to “non-working parents not respecting the 4pm pick-up”.

“The staff have families and commitments that they need to attend to just like you and having to cancel or make other arrangements at the last minute due to having to keep our staff: child ratios legal,” the letter reads.

“Non-working” parents are then advised if they do not pick up their child by 4pm a late fee will be applied to their account to cover the costs for the overtime for staff.

Not only does this letter appear to me to be unreasonable, but completely discriminatory.

If there is anyone out there that thinks a stay at home parent isn’t working, I challenge you to spend a day in their shoes. There is no harder job than that of a stay at home parent. I have a pretty good mix of time spent at work and time with my little babe at home and I don’t have to think twice before answering which one is harder, that’s for sure.

The beauty of childcare centres is you don’t have to rush to pick up your little one, there is no guilt to be felt because you’re paying for someone to look after your kid. When family or friends are looking after your kids, there is that extra pressure we put on ourselves to get home. Even if I need a few things from the supermarket after work I feel guilty turning up at home with grocery bags. But at childcare? I can turn up with the whole damn supermarket!

Why now should anyone be made to feel guilty when turning up to childcare to pick up their child? Oh yeah, and slapped with a big-ass bill while they’re at it.