Chrissy Teigen pens an open letter about her post-natal depression

Chrissy Teigen is the girl we all want to be our bestie. She’s cool, smart, funny as hell and doesn’t take herself too seriously (and imagine borrowing from her wardrobe!), but since the birth of her daughter 11 months ago, behind her smile and quick wit she’s been hiding something big, something painful. She’s suffering from post natal depression.

The model and TV host penned an open letter in this month’s Glamour magazine to share her struggle with the world in the hope it would help other women talk about this often taboo subject that so any women face.

This is some of what she had to say and if you thought you couldn’t love or admire this woman any more, you’re about to be proven wrong.

“I had everything I needed to be happy. And yet, for much of the last year, I felt unhappy. What basically everyone around me—but me—knew up until December was this: I have postpartum depression. How can I feel this way when everything is so great? I’ve had a hard time coming to terms with that, and I hesitated to even talk about this, as everything becomes such a “thing.” During pregnancy, what I thought were casual comments about IVF turned into headlines about me choosing the sex of my daughter. And I can already envision what will be said about me after this admission. But it’s such a major part of my life and so, so many other women’s lives. It would feel wrong to write anything else. So here goes.

After I had Luna, our home was under construction, so we lived in a rental home, then a hotel, and I blamed whatever stress or detachment or sadness I was feeling at that time on the fact that there were so many odd circumstances. I remember thinking: “Maybe I’ll feel better when we have a home.” 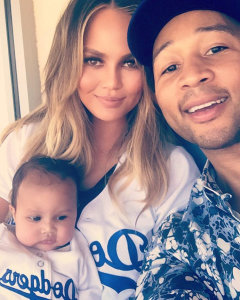 I went back to work on Lip Sync Battle in August, when Luna was four months. The show treated me incredibly well—they put a nursery in my dressing room and blew up photos of Luna and John and my family for my wall. When Luna was on set, they lowered the noise levels. They turned down the air so she wouldn’t be cold. Only the most gentle knocking on the door. Pump breaks. I mean, there was no better place to get to go back to work to. But I was different than before.

Getting out of bed to get to set on time was painful. My lower back throbbed; my ­shoulders—even my wrists—hurt. I didn’t have an appetite. I would go two days without a bite of food, and you know how big of a deal food is for me. One thing that really got me was just how short I was with people. I would be in my dressing room, sitting in a robe, getting hair and makeup done, and a crew member would knock on the door and ask: “Chrissy, do you know the lyrics to this song?” And I would lose it. Or “Chrissy, do you like these cat ears, or these panda hands?” And I’d be like: “Whatever you want. I don’t care.” They would leave. My eyes would well up and I would burst into tears. My makeup artist would pat them dry and give me a few minutes.I couldn’t figure out why I was so unhappy. I blamed it on being tired and possibly growing out of the role: “Maybe I’m just not a goofy person anymore. Maybe I’m just supposed to be a mom.”

When I wasn’t in the studio, I never left the house. I mean, never. Not even a tiptoe outside. I’d ask people who came inside why they were wet. Was it raining? How would I know—I had every shade closed. Most days were spent on the exact same spot on the couch and rarely would I muster up the energy to make it upstairs for bed. John would sleep on the couch with me, sometimes four nights in a row. I started keeping robes and comfy clothes in the pantry so I wouldn’t have to go upstairs when John went to work. There was a lot of spontaneous crying.

I started keeping robes and comfy clothes in the pantry so I wouldn’t have to go upstairs when John went to work.

Anytime I was seen out, it was because I had already had work or a work event that day. Meaning I wouldn’t have to muster up the energy to take a shower, because it was already done. It became the same story every day: Unless I had work, John knew there was not a chance in hell we were going on a date, going to the store, going anywhere. I didn’t have the energy.

During that time my bones hurt to the core. I had to go to the hospital; the back pain was so overwhelming. I felt like I was in an episode of Grey’s Anatomy: These kids were around me, asking questions. Maybe it was a kidney infection? No one could figure it out. I saw rheumatoid doctors for the wrist pain; we thought it might be rheumatoid arthritis. I felt nauseated all the time, so I saw a GI doctor. I wondered: Am I making this all up? Is this pain even real anymore?

Before the holidays I went to my GP for a physical. John sat next to me. I looked at my doctor, and my eyes welled up because I was so tired of being in pain. Of sleeping on the couch. Of waking up throughout the night. Of throwing up. Of taking things out on the wrong people. Of not enjoying life. Of not seeing my friends. Of not having the energy to take my baby for a stroll. My doctor pulled out a book and started listing symptoms. And I was like, “Yep, yep, yep.” I got my diagnosis: postpartum depression and anxiety. (The anxiety explains some of my physical symptoms.)

I remember being so exhausted but happy to know that we could finally get on the path of getting better. John had that same excitement. I started taking an antidepressant, which helped. And I started sharing the news with friends and family—I felt like everyone deserved an explanation.

The mental pain of knowing I let so many people down at once was worse than the physical pain. To have people that you respect, who are the best in the business, witness you at your worst is tough. Even though this was something I shouldn’t have to apologize for, I did want to apologize. Because on a set, people depend on you. A lot of people are coming together and all you have to do, Christine, is put on a unicorn head and shoot a money gun. Editors are wondering what the f-ck happened to the girl they gave a book deal to. This shit was flying through my head and I felt horrible.

Before this, I had never, ever—in my whole entire life—had one person say to me: “I have postpartum depression.”

I looked at Luna every day, amazed by her. So I didn’t think I had it. I also just didn’t think it could happen to me. I have a great life. I have all the help I could need: John, my mother (who lives with us), a nanny. But postpartum does not discriminate. I couldn’t control it. And that’s part of the reason it took me so long to speak up: I felt selfish, icky, and weird saying aloud that I’m struggling. Sometimes I still do.I’m speaking up now because I want people to know it can happen to anybody and I don’t want people who have it to feel embarrassed or to feel alone. I also don’t want to pretend like I know everything about postpartum depression, because it can be different for everybody. But one thing I do know is that—for me—just merely the Super Bowl or Grammys. (This is cringeworthily unrelatable, and I am very aware of that—it’s giving me anxiety.) 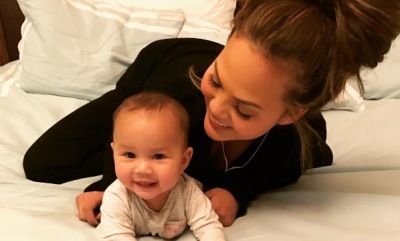 Physically, I still don’t have energy for a lot of things, but a lot of new moms deal with this. Just crawling around with Luna can be hard. My back pain has gotten better, but my hands and wrists still hurt. And it can still be tough for me to stomach food some days. But I’m dealing.I’m grateful for the people around me. John has been incredible over the last nine months. I love John and Luna more than I can imagine loving anything, and John and I still hope to give Luna a few siblings. Postpartum hasn’t changed that.More than anything, I always want to have enough energy for Luna—to run up the stairs with her, to have tea parties with her. As she gets older, she’s becoming more and more fun. Her eyes are getting so wide, and I want to be there for those wide eyes. And I will be.
Phew! I’ve hated hiding this from you. XX, Chrissy”
I haven’t suffered from post-natal depression but know a lot of people who have and reading Chrissy’s open letter made me feel so emotional at the thought of the kind of things the beast of post-natal depression can do to you, and has done to many women in my life.It’s often that those people going through something like this suffer in silence, you don’t often  find out that someone you know has been through it until after they’ve had their darkest days. I hope, if anything, Chrissy’s brave and honest letter will help women who are struggling with this to feel more open about sharing their feelings and getting the support they need.Props to you Chrissy.If you, or someone you know is going through this right now, you can contact PANDA’s National Hotline on 1300 726 306.
Explore: Babies, Motherhood, Parenting
Share
Show Comments
Oi! We like you... wanna like us?
Loading...
pokies
Latest Popular