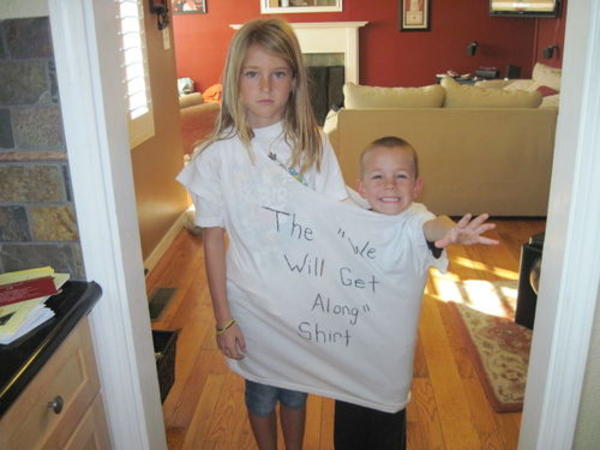 This mum’s trick to stop her kids fighting is GENIUS!

There’s not much that grinds my goat like when my two kids fight with each other. Actually, it’s not so much even fighting, more silly, pointless bickering over the smallest things. Case in point: My 6-year-old son loses his shit every time my 8-year-old daughter sings in the shower because he gets frustrated when she “tries to sound like an American girl.” This never ends well because his annoyance only makes her sing louder and more ‘American’ while he continues to scream and tantrum. Of course, then I join in the chorus….”Stop! STOP IT! Are you guys SERIOUS RIGHT NOW??” You know the drill.

Siblings fight, I get it. But when it’s a daily battle from sunrise to bed time, it can get real annoying, real quick. As a parent, all I want is for my kids to be close and I’ve tried it all to stop their cranky-pants ways. I’ve tried separating them, calmly talking them through it, yelling, leaving the room, taking toys away….everything.

The only thing I haven’t tried is the ‘I Love You Shirt’ I recently saw used by an ‘American’ mum (my son would love that) called Alexis Tillman. And it is fucking BRILLIANT.

Here’s how it goes. When her kids (Dominique, 10 and Tyler, 8) are fighting and just can’t be reasoned with, Alexis makes them both slip into an oversized t-shirt (the I Love You shirt), hold hands and slow dance together. It’s possibly the most adorable thing we’ve ever seen and the MISERY on those kids’ faces is priceless.

Speaking to CBS News, Alexis said she chooses an American gospel song  (haaaaa….more American!) called I’m Lost Without You by brother and sister duo, BeBe and Cece Wynans. “They sing gospel songs together. They are very, very close. That’s why I picked that song. I wanted them to hear the words they are saying. I said, ‘You’re brother and sister – you need each other,’” Alexis said.

“I want them to get along, to stick together. So that’s what I’ll keep trying to teach them. Whatever it is that you’re arguing or bickering about it’s silly, let it go.”

Most of the time, the shirt dance only gets a one song run, but if they’re fighting hits epic levels, she’ll make them dance for two or three songs. Honestly, I can’t stop laughing at this; it’s golden. Better yet, Alexis knows that although ‘the shirt’ is annoying for her kids, “It beat spanking or yelling at them.” Amen, sister.

I’m seriously rummaging through my wardrobe right now to find my own version of the ‘I Love You shirt’ to pull out and introduce my kids to. I’ve never been so excited for them to argue in my life!

How do you deal with your kids’ arguments?