How young is too young to let your kid colour their hair?

When I first saw the picture of this little girl with the most fabulous, technicolour hair, I thought back to my own daughter’s most recent hair cut. It was just a few days ago and my husband took her to the hairdresser – but not before I’d laid down some strict instructions first. “Don’t take off too much; she can take off some length, but keep it below the shoulders” and of course, “No matter what she says, NO fringe!”  I know this makes me sound like some kind of over-bearing, demon mother, but I was having flashbacks to the weeks and months of complaining I went through a year ago when she said she wanted her very long hair cut above her shoulders. “I’m NEVER cutting my hair EVER AGAIN” she cried almost every day for a year and that whining got real old, real quick.

There seems to be no such regret with six and a half year old Lyra, the owner of the coolest hair on the block. Lucky for her, her mum, Mary, is a hairdresser and after much discussion, design (by Lyra) and the necessary inquiries (approval from school, etc), her dream hair became a reality. After posting the pics on her Instagram page, Mary found that her little girl’s hair had gone viral to much debate about its suitability for such a young kid. From judgement over the safety of using hair dye on little Lyra’s head (Mary said she used Manic Panic, a non-toxic hair dye similar to a “highly pigmented conditioner”) to judgement over Mary treating her daughter “like a doll”, her parenting has copped a shellacking.

There’s no doubt about it – Lyra’s hair looks supremely cool. When I look at her happy little face, totally thrilled with her new ‘do, it made me question my own parenting. You see, I wish I was a mum like Mary. A mum who says, “I have this weird goal of raising self-confident, self-assured children, who know and feel the freedom of self-expression. So when my child asks for blue hair, I tell her how much I like her choice and how beautiful she is. Even better, I do it with quality products, that not only respect the integrity of her hair, but also fades out with time.” 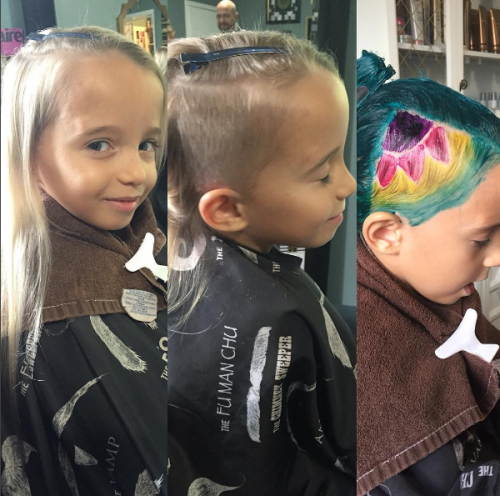 Mary has a really valid point. The fact is, this little girl isn’t trying to look like anyone else. She doesn’t want her hair to reflect someone else’s look – she’s picked her own style and wants to look like herself – just a more colourful version. In my opinion, I’d be more concerned if my daughter wanted to dye her brown locks blonde to emulate some star she’s seen on the television.

That said, I know if my daughter asked me to shave the side of her head and dye it unicorn-style, my answer would be no.

This shits me about myself because if I’m being totally honest, I can be quite controlling over how my kids look when we go out. On an ordinary day, I’ll let them pick whatever they want to wear, which is usually fingerless gloves and necklaces for my son (rock star style) and mismatched leggings and tops for my daughter. When we go ‘out’ however, it’s my call. I say “no” to socks and sandals and “no” to the old, faded pants she loves so much. My little boy asked me if we could shave his head last summer and again, I said “no” – not because I thought he’d regret it (it’s hair, it’ll grow back) but because I don’t like a shaved head on a little kid. Somehow, this seems more acceptable than a mum allowing her child to express themselves how they want and I’m not quite sure why. 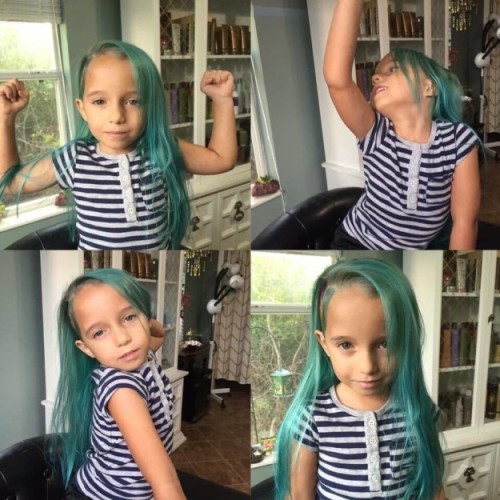 Little Lyra is loving herself SICK with her new ‘do.

Part of me wishes I was a more relaxed mum, I really do. I’m so conflicted over appearance-related stuff, because while I agree with everything Mary says, I feel like kids have their entire lives ahead of them to make their own decisions about how they look. If they’re older and they want piercings, coloured hair, tattoos, then that’s their call….but while they’re so young, I feel like those decisions are still mine to make. There’s something about colouring hair that feels so grown up to me and I don’t think I’m ready for my kids to enter that territory quite yet.

That’s my opinion though – and that doesn’t make Mary’s choice for her daughter wrong, it’s just different. I really commend her for being so open to letting her daughter have the freedom to make those choices. In her own words, Mary says, “When you’re a grown up with crazy-coloured hair, people say that such things are for kids. It’s a contradiction. I say why not let them have fun while they’re young! Who knows what type of job she may end up with, but a lot of them won’t allow unnatural colours. When you think about it that way, it’s actually the perfect time to let them experiment with color.”

The most important thing here is that Lyra looks adorable and above all, happy with the choice that she’s made, as does her mum. Well done, ladies…we think you’re both excellent!

Would you let your little girl colour her hair? Is it really that big of a deal?