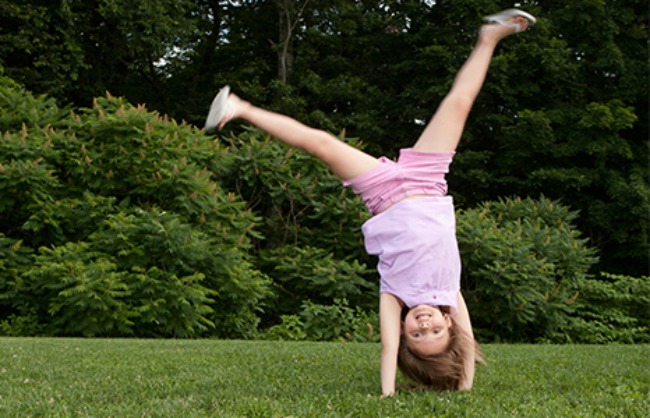 Are your kids allowed to do cartwheels at school?

Growing up, I was the queen of cartwheels. I was a flexible little kid and while handstands, backbends and splits were all part of my party trick repertoire, it was cartwheels that ruled my world. When my mum used to pick me up from primary school, I would often cartwheel the entire way home, stopping only at the curb (to her frantic cries) to check for cars. Now that I’m a much bigger, much less limber grown-up, cartwheels are a thing of the past – but I remember how ace they felt and now, watching my little girl trying to master a ‘proper’ cartwheel is pure joy.

But it turns out not everyone is a fan of the childhood, topsy-turvy fave. Bunbury Primary School in Western Australia has recently issued a temporary ban on cartwheels and handstands in the school yard after they reported that at least two kids are camped up in Sick Bay on a daily basis as a result of wrist-related injuries.

According to a statement issued to 7 News from the principal, “This is not about stopping kids from taking risks and having fun.”

“But attempting things like flips or handstand on bitumen and sloping grass areas without learning how to do it properly is never a good idea.”

When I asked my own daughter, who is eight, about whether she practised her cartwheels at school, her response shocked me. “We’re not allowed to do cartwheels at school, Mum,” she said. ” One girl did one and hit another kid in the eye so now they’re banned.” So even in my own hood, this has become the reality…and I had NO idea. 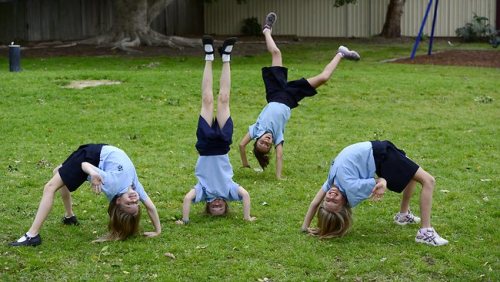 This is what play time looked like in my childhood

When it comes to parenting, I’m right up there in the red zone of over-protectiveness, but even I think this is ridiculous. There is something to be said for letting kids be kids and learn to move their bodies in fun and creative ways. When it comes to school playgrounds, isn’t there a much greater chance of a child falling from the monkey bars or slide and actually breaking their wrist than a cartwheel injury? What are we meant to do about that, remove playground equipment and tell them to sit around and tell war stories about how their parents confiscated their iPad over the weekend?

At a time where inactivity is a real problem for the youngest members of our community, I’d be encouraging a bit of playground cartwheel mayhem. My son spends every second day in the Sick Bay as a result of scraped knees and pole run-ins while playing Tiggy at playtime, but that’s what kids do. When he comes home and I spot yet another Band-Aid on his little body, I’ll kiss it and encourage him to keep running around tomorrow – but not before reminding him to make sure his shoe laces are done up good and tight. Because that shit is dangerous.

What are your thoughts on the cartwheel ban?