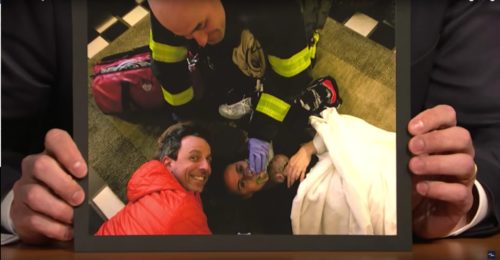 There are birth stories and then there are BIRTH STORIES…and this is one of ‘those’. Seth Meyer, host of Late Night, spoke about how his wife gave birth to their second child, Axel, in the lobby of their apartment complex. If he didn’t have photo evidence, it would be hard to believe.

Seth talks about how his wife had a super quick birth the first time around, and that they would joke that she may give birth in an Uber on the way to the hospital. And then…a regular Sunday morning rolled around and they went about their normal business until his wife, Alexi Ashe, went into labour. Knowing she would have a quick labour they didn’t waste any time trying to get to the hospital. Then nature took it’s course…

“My wife just says, ‘I can’t get in the car. I’m going to have the baby right now. The baby is coming.’ I’m just trying to calm her down…I’m like, ‘Look, no,’ because I’ve been through exactly one birth.”

“I called 911 and over the course of a minute conversation, I said, ‘We’re about to have a baby; we’re having a baby; we had a baby,'” Meyers said. “I went from someone calling in about an emergency to just sharing good news with a stranger.”

He described the firefighters arriving and one of them cutting the umbilical cord – all their neighbours pitched in with blankets and towels.

WOWZA! Check out the pics. This kid has an epic birth story as his party trick for the rest of his life.

Here are some pics… 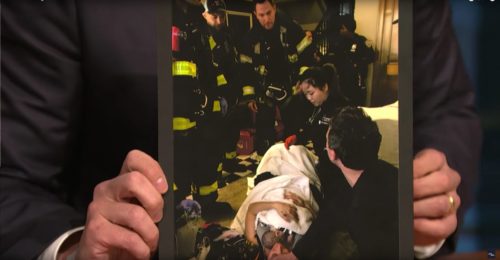 Get your ears around our new podcast, Show+Telling. You can listen to our third ep below, then come subscribe over here so you can get every episode delivered straight to you.