The one thing that makes life as a single mum easier

The idea of holidays as a single mum is a bit of a nightmare. It feels like you are just transporting the hard work to another location.

While lots of families head away over the school holidays, I decided we should as well. Not being at all enticed by travelling solo with my two young girls, I decided to bring a tribe along for the ride. My other single mum pals and I formed our own special family and went on holidays together. Four mums, eight kids. Madness but totally brilliant. 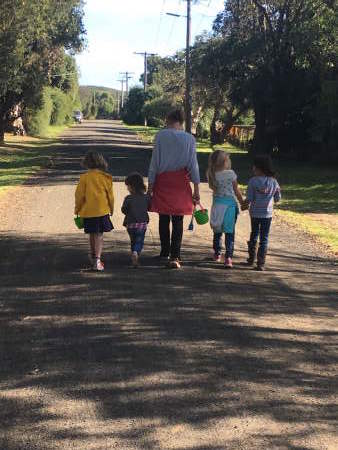 Very often you ended up with more kids than you brought!

We took turns sleeping in each morning, while one mum fed the eight kids, the other three mums slept.  There were so many kids running around that they entertained each other, so we could sit and chat and actually finish a conversation (and several bottles of wine). Holiday heaven.

At times it was bloody chaotic, but totally worth it. Not only have we created a village for ourselves as single mums but our kids now have a village full of friends who really get each other. They have similar living set ups and it makes the chat about mummies and daddies not living together that bit easier.

This single mum village wasn’t a club I ever expected to be part of, but I found these women through chance and heartbreak, and I feel like the luckiest person in the world to have them.

Lindy Klim recently became a single mum and in our chat with her On The Couch she talks about the love and support she received from her girlfriends and how that pulled her through an incredibly difficult time.

We have more On The Couch chats with this fab lady here.

Do you have a village that make your life easier?