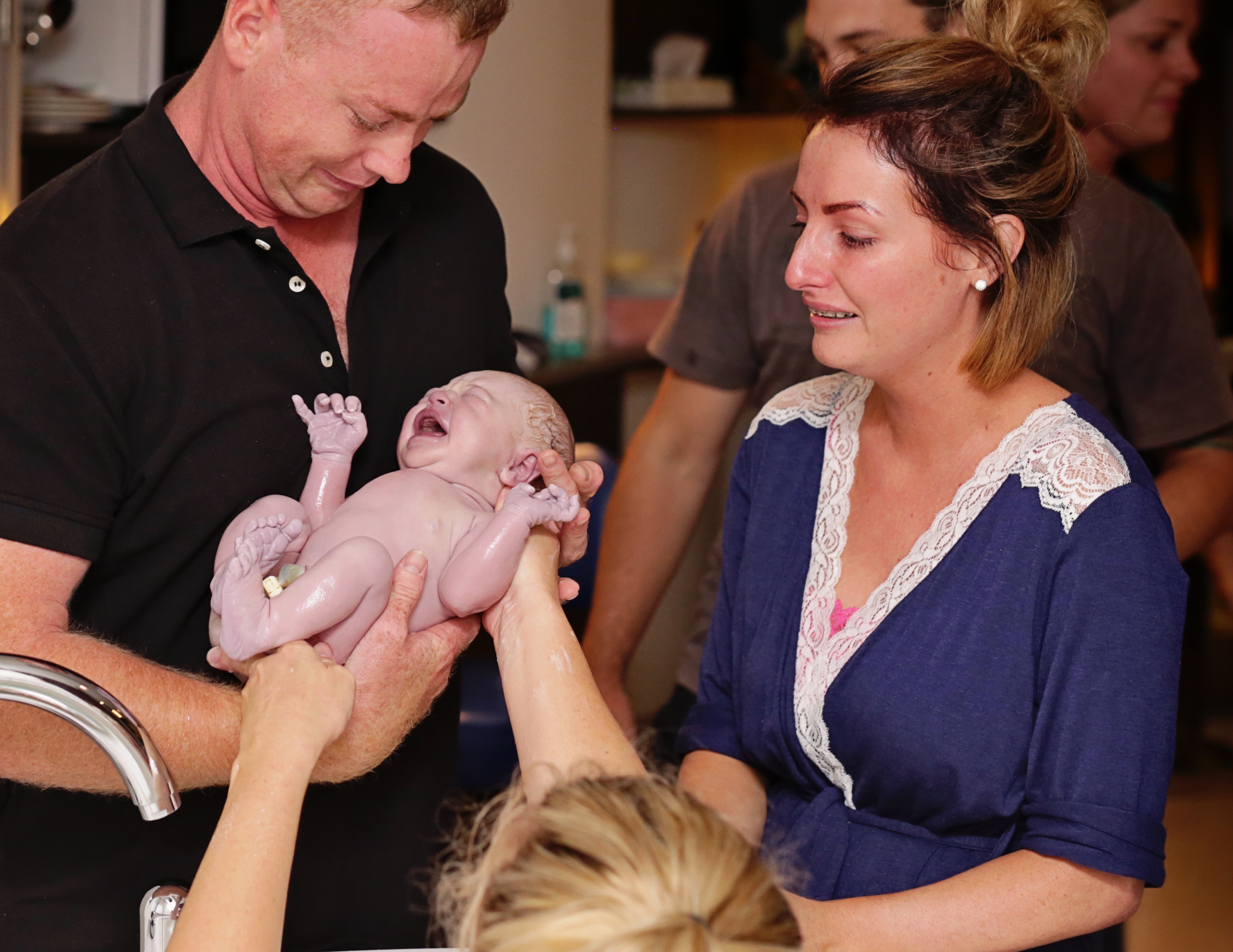 Aimee thought she’d never be a mum. Then her sister stepped in.

Just a few weeks ago Monty sat down for a chat with Sarah-Jane Young, an incredible woman we have long followed and adored. Her journey to motherhood was not an easy one; not only did she have to endure IVF to fall pregnant with all of her babies, but she lost her little girl Charlotte at 21 weeks. Her battle to mentally and physically recover has connected with so many of you amazing Show+Tell readers.

One of the incredible ladies that watched Sarah-Jane’s story was Aimee Morrisby. Aimee immediately reached out to us after seeing Sarah-Jane’s video and wanted to share her incredible story of love, heartbreak, and finally, immense joy. Below is her story, told by her…for you! You can also watch a little vid below of the birth of her little girl via her sister, who was her surrogate.

Imagine being 19-years-old, unmarried and giving birth to your first baby girl only to find out you might lose her. That was the case for my mum and dad when I arrived in Toowoomba on the 16th January, 1990. I was born on time and during her pregnancy, my mum’s scans were always clear of concerns – but that was until the day I was born. On my third day of life, I was airlifted to Brisbane Children’s Hospital where I was quickly diagnosed with Hirschprungs Disease; a condition where the nerve cells in the muscles of the large intestine are missing. 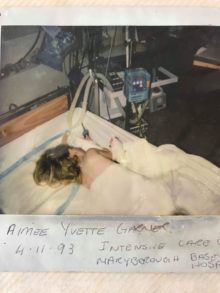 Aimee as a little girl

Surgeons removed everything they could and I was left with 100cm of my bowel and a Colostomy bag for the rest of my life. I wasn’t expected to survive and if I did, it would be a hard road. The list of the things I wouldn’t be able to do if I survived was long, which included walking and potentially bearing my own children. I grew up knowing motherhood may never be a possibility for me.

I have clocked up nearly 100 surgeries in my short life, with over 40 scars and a very poor immune system. Safe to say, my pain threshold and mental toughness is at an all-time high though.

I was 19-years-old when I met Jake and although it may sound corny, I fell in love with him the exact second he walked into my life. I honestly would have married him that day. I knew on our wedding day, four years later, that he was going to make all of my dreams come true; he was going to love me hard, support me, and help me survive. In that first four years I can honestly say that I had never been in better health. He was my new drug. It’s been 10 years now, and over that time so much has happened. We have traveled, pursued careers and had a beautiful daughter, Francesca Louise, who is now 2-years-old.

We gave our daughter the middle name Louise after my younger sister, Shayna Louise. The person who made me a mother.

Jake and I started trying for a baby in 2012 at the ripe age of 22 and in our minds, we were just hoping for some success by the age of 30 – and even that felt like wishful thinking. After just one month of trying, I was rushed into hospital with a torsion on my Fallopian tube that had almost cut off the supply to my ovary. Thankfully, this made us aware of the fact that my body, especially my reproductive organs, were ageing very fast, and I needed IVF if we were ever going to have a shot at parenthood. That’s when we immediately started IVF and amazingly, we fell pregnant. The morning sickness was awful, but it felt like heaven to me because it gave me a sense of comfort that everything was progressing as it should. But then one morning, as I woke up to blood trickling down my leg, I knew it was over.

We went on to have another four rounds of IVF, each ending in miscarriage. The last pregnancy was twins; one failed to grow and the other I had to abort because that little guy was stuck in my tube and almost killed me. After these losses, our IVF specialist sent me to one of the best bowel surgeons in Brisbane as he was almost 100% certain something wasn’t right when it came to my ability to carry a baby.

The surgeon thought that perhaps moving my colostomy bag to the other side of my stomach would help. We felt like this was the game changer for us and finally, we had hope again. 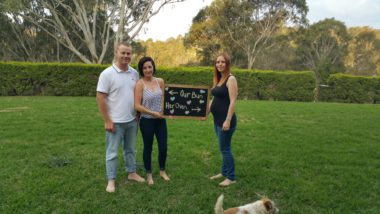 I woke up to my surgeon sitting next to me in recovery at 9pm on the night of the surgery, and the heartbroken look on his face said it all. He told me the surgery wasn’t successful. At that moment, my heart shattered into a million pieces. My life was in jeopardy and when Jake saw me for the first time after my surgery, he was rattled. It was at that moment that he said, “NO MORE.”

We grieved, we processed and we moved to make a fresh start on the Gold Coast. We were fine with what our future now looked like and there, we became truly happy.

Then in 2015, my sister Shayna called me and said, “Hey Aim, do you want to have a baby? I want to carry it for you.” By this stage I was 25-years-old and she was only 22, but she had already had two beautiful babies and married the man of her dreams. In fact, her youngest was just one year old at the time.

Jake and I obviously accepted her incredible offer and moved back to Toowoomba. Luckily, we still had 3 embryos left frozen in storage, which made the process so much easier and faster. After spending hours and hours with lawyers and counsellors, we were booked in for Shayna to start the first cycle, where the best of the 3 embryos was transferred. Unfortunately, we lost that little one two weeks later, and although Jake and I were upset, we’d become accustomed to bad news. Poor Shayna took it so hard; not only was she going through a miscarriage, she was losing someone else’s baby.

Six days after the second attempted transfer, I rocked up to Shayna’s house with a bag full of tests. POSITIVE again!!

Six weeks into the pregnancy, we went to Brisbane for the first scan where doctors warned us it may be hard to hear a heartbeat so early on. We all broke down as we immediately heard the unmistakable BOOM, BOOM, BOOM, BOOM. We could see our baby!  It was a moment none of us will ever forget and from then on, Jake and I both knew the next 7 months were going to be okay. We also knew our future was going to be amazing! 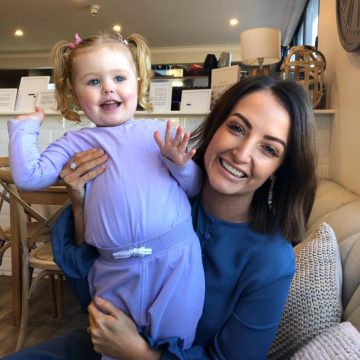 Shayna carried Francesca right up until two days before her due date. The pregnancy couldn’t have gone better and Shayna had me in amazement the entire way through. Feeling the first kicks was so good! Not once did I feel jealous, envious or upset. I’ve actually never felt happier. And I was and still am to this day so proud and grateful to my sister.

The birth was the best part and Shayna made it look easy.

At 5:15pm on Friday the 18th of March 2016, Francesca Louise Morrisby took her first breath. I made sure that her first cuddle would be with her Aunty Shayna; I wanted nothing more than for my sister to have that moment with her little passenger that she gave life to. Watching them lock eyes is my most cherished memory to date. Jake cut the cord, then Shayna passed him his daughter. I watched him fall in love and it gave me butterflies. I had to stop myself from jumping into the birthing bath with Shayna. All I wanted was to make sure she was okay. Nothing else mattered. She was okay, she did an amazing job and I was so proud of her.

Then it was my turn to hold my baby for the first time. As Jake passed her to me, my very first thought was that THIS is why I survived. Now, Francesca is almost three years old, healthy and happy, and my life feels complete.