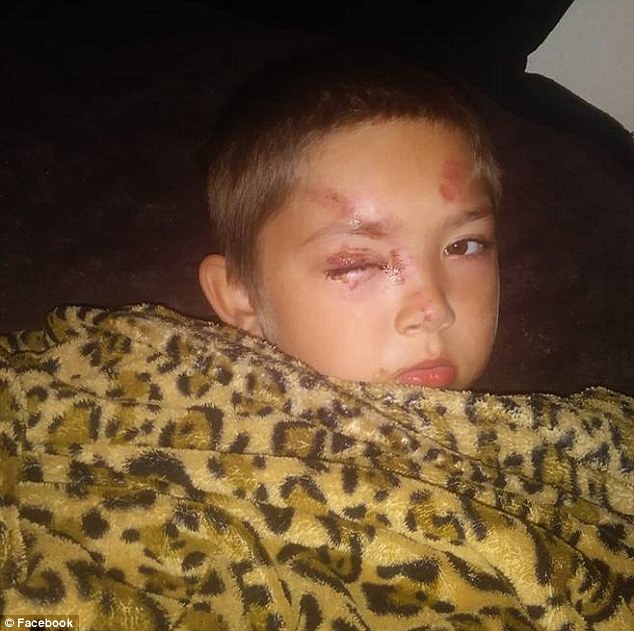 Carter told the bullies to stop picking on his friend…

It’s a sad reality that most of us have encountered bullying in some form throughout our lives. At school, in the workplace, at home or maybe, you were even a bully yourself in your younger years. The thought of a little person you love being bullied is more than a little scary, not only because of the horror of enduring daily torment, but because incessant bullying can have some very real, long-lasting effects well after the name-calling and physical abuse is over.

The scariest thing, at least in my mind, is just how early bullying behaviour starts. And every now and then we hear a story that hits us right in the chest and leaves us feeling that shithouse combo of complete sadness and massive anger – like the recent case of six-year-old Carter English.

Carter, who lives in Olympia in the US state of Washington, was at the front of his home when a group of at least six kids started bullying his friend. In his own account, Carter said, “They were just bullying him, like beating him up. I just told them to stop… and then they did it to me.” 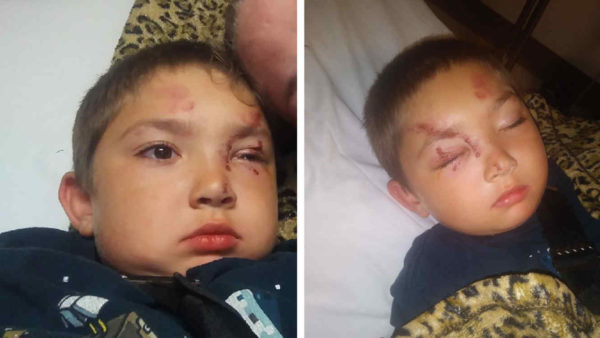 The extent of Carter’s injuries were horrific

Carter was found laying on the front steps of his home by his mum, Dana. After being pelted with sticks and rocks and having sawdust rubbed into his eyes, Carter was left with extensive injuries including multiple fractures to his elbow, cuts and bruises all over his skull and face, as well as a laceration to his eye that required surgery. It was initially suspected Carter may even lose his eye after doctors worked tirelessly to remove the rocks and bark lodged within it.

He spent two nights in the hospital and has since returned home to continue his recovery. Understandably, Dana is rattled by the event, telling KA2.TV, “I haven’t slept. I haven’t eaten. I can’t do anything. I can’t even leave his side.”

To make matters worse, the kids who assaulted Carter live in his apartment block and he is now terrified that they’ll attack him again. The main instigator is believed to have been just five years old, and due to the young ages of the kids involved, Police are unable to lay charges but are reportedly contacting social services.

All this because he was doing what we’ve probably all told our kids to do at some point – To “stick up for your friends”. 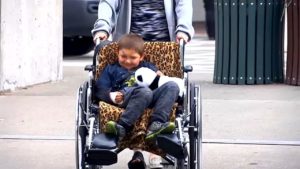 As a parent of two young kids, this frightens me to my core. My husband and I have always told our kids to stand up to bullies, to stick up for their mates and to call out injustice when they see it…but stories like this make me second guess myself. It’s hard for a little kid, particularly one as young as Carter, to know how to gauge the potential danger in a situation. My go-to advice has always been to seek out the help of a grown-up in a scary situation, whether it be a teacher in the playground or a neighbour at home. But what Carter did,  just by telling those boys to leave his friend alone, is something I would absolutely expect my own kids to do.

Even more worrying, and what I believe is probably the most important factor in this story, is to ask HOW five and six-year-olds are able to show such brutality? I reckon most kids are capable of a frustrated kick or push in the playground, but to actively seek it out? To lay into another kid and keep kicking and pelting rocks and rubbing bark into their eyes while they cry and try to shield their little body from the attack? Something is very wrong with this picture.

It’s probably unfair to speculate about possible factors that may be at the root of such behaviour, but there is definitely something not right in the life of a child who is able to exhibit this level of violence. I can’t help but feel that until this stuff is addressed; until we can protect ALL kids by addressing potential issues within the home or providing support for behavioural and/or psychological issues at school, at home, on the sports field and in every aspect of life, the risks will always be there. And every child deserves better.

Lisa Wilkinson spoke to us about her horrible experience with bullies in her school days. Have a listen to the full chat in pod form below, then come subscribe to our pod here for more awesome stuff you’ll love.