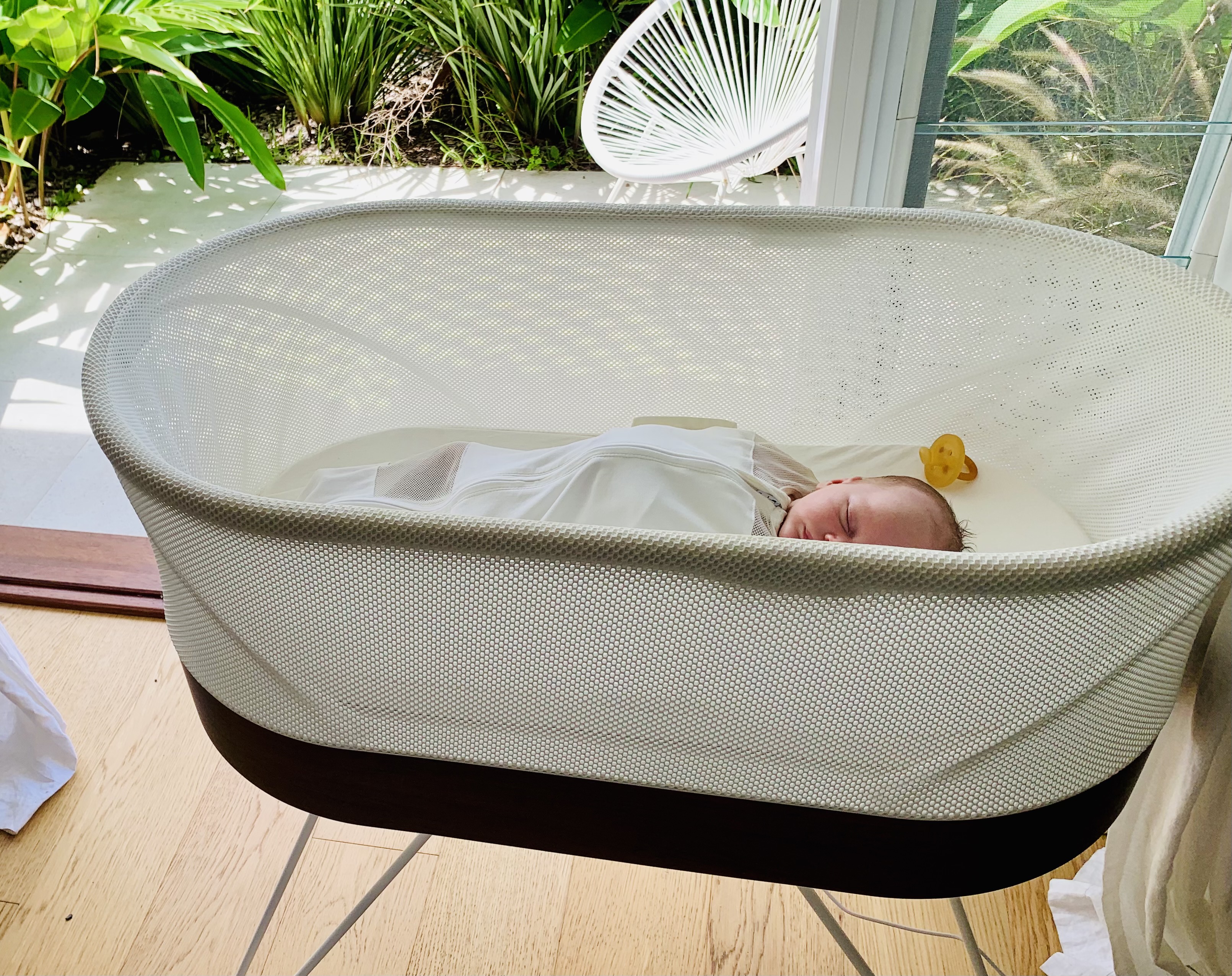 Close to six months ago I was very busy heaving a third man child from my loins. He is a perfect little delicious bundle called Otis, and we have decided we will keep him. He now smiles when our eyes catch each other and his little giggles make my ovaries flip.

Having already had two babies nine and six years old before Otie arrived, I knew the overwhelming and all-consuming love that was going to take over me, but I was also very aware of the sleepless nights and stinging eyes that suck the joy out of the newborn stage.

Safe to say I was pretty anxious, actually make that shit scared, that I might not cope very well this time around. With two other kids also needing my attention and my very fond bond with sleep, I knew I needed help and lots of it. I was talking to my sister-in-law about my worries when she mentioned a four-letter word that I had never heard before…’SNOO’ she said, “get a SNOO”. “A SNOO,” I said, “What is this SNOO thing you speak of?”

She told me that the SNOO  is a smart bassinet that basically does everything except wash your dishes so I promptly yelled “SOLD”.
The SNOO is a responsive bassinet; meaning it knows when your baby is unsettled and combines gentle rocking with white noise while the baby is snug as a bug in a safe swaddle. 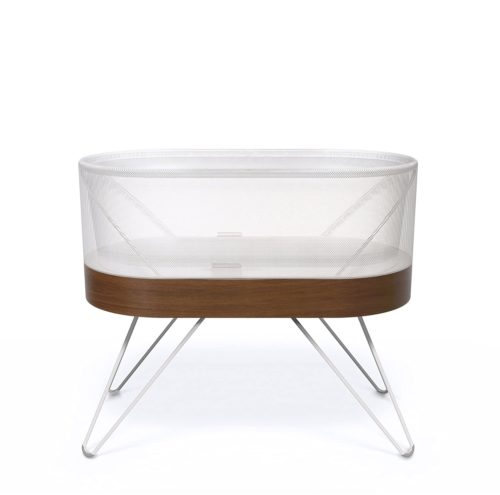 The SNOO imitates the calming yumminess of the womb so this not only makes the bub feel safe and cozy but PROMOTES SLEEP. On average the SNOO helps your baby (and you) sleep an extra 1-2 hours per night which can be the difference between a total zombie and a functioning human.

The SNOO automatically responds when it detects the baby is fussing and more often than not I found my little guy calmed within a minute or two.

After the first three days and nights of having the SNOO, my partner Sam turned into a self-appointed ambassador and would chew everyone’s ear off about this magical sleep machine.

The amount of extra time we had in our days also made a huge difference. The SNOO took on the load of settling Otis which was huge. I have only had to rock Otis to sleep a handful of times because Aunty SNOO does it for me.

The SNOO is super easy to put together and use as well. It has an app that has helpful tips and a daily sleep report as well.

It has been a game-changer for us and if anyone asks me if they should invest in a SNOO, my answer is a big fat YES!!

I wanted to pick the brain of the man who is the brains behind it. He is a Paediatrician called Dr. Harvey Karp and hopefully, I have asked him the questions you would like to know the answers to. 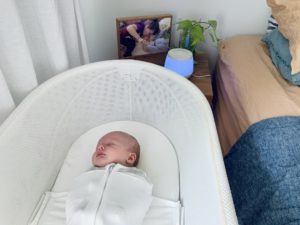 It’s fair to say you have a couple of years of experience up your sleeve as a pediatrician (25 to be exact) what has been the most common question you have been asked?

Most parents want to know about sleep…and how to calm crying to get more of it! By the time someone is expecting, they’ve heard all the horror stories about the sleepless nights of parenthood…how Mom was so out of it that she put shaving cream on her toothbrush instead of toothpaste or Dad found his keys in the fridge. But exhaustion is also a real problem. Exhaustion triggered by persistent crying creates huge stress in families and can lead to serious issues. That’s where learning how to turn on a baby’s calming reflex is hugely helpful.

In my work, I discovered that babies are essentially born three months too soon. For nine long months babies are used to the cozy confines of the womb, as well as it’s constant motion and whooshing sounds. When they arrive in our world, it’s very jarring for them! I realised that when we imitate the sensations womb it actually triggers a baby’s calming reflex. The calming reflex is like nature’s off switch for crying—by activating it, parents can cut down on crying and help their little one sleep better. The 5 S’s (swinging, swaddling, side position, shushing, and sucking) are one way to flip that switch on, and SNOO harnesses three of the 5 S’s (swaddling, shushing, swinging) to do the same.

You are very clear in saying the mother should be babied as much as the actual baby to start with. I LOVE this. So much pressure felt from the get-go, I want you to scream this from the rooftops please! Can you elaborate on what you mean by this?

That’s right! For hundreds of years new mothers were babied…as much as their babies, and families had large extended families and neighbours nearby to help with the baby or the housework. Never in history were parents expected to care for their baby all by themselves. The idea of a nuclear family—one mum and one dad doing it all—may seem normal, but it’s really about as unnatural as…the nuclear bomb! So it’s no wonder why parents feel overwhelmed today…they are!

As new parents, we can take in too much information OR not enough. What do you think the line is between education and intuition?

For parents today, taking in all of the advice out there probably feels a little like trying to drink out of a fire hose! If you’re looking for advice, I’d recommend calling your healthcare provider before going down the rabbit hole of online message boards. And, of course, there’s room for parental instinct, too! I think that the “right” amount of information is whatever it takes for you to feel a little more confident in this new, big role you’ve just taken on. It’s going to vary from parent to parent. Something like learning the 5 S’s can give parents a big confidence boost because they’re learning a tangible skill that’s helped soothe thousands of babies, but this skill also probably feels intuitive because it builds on our natural instincts to rock and shush babies.

Sleep deprivation is brutal and all most parents want is a kid that SLEEPS. What are the realistic expectations of a baby sleeping through the night?

Typically, most babies don’t sleep in 6 to 10-hour stretches (what we consider sleeping through the night) until they’re between 4 and 8 months old. When babies are first born (0 to 2 months), you can expect them to wake every 2 to 3 hours to feed as they work to gain weight. After this (between 2 and 4 months), babies will begin to be able to sleep in longer stretches, but many babies continue to wake frequently through the night.

However, we’ve done the research, studying thousands of babies, that has shown us that in SNOO, most babies sleep 9+ hours a night by 2 to 3 months! That’s because SNOO is able to detect and automatically respond to crying with a soothing mix of white noise and motion that triggers a baby’s calming reflex, allowing them to doze back off without Mum or Dad.

It’s been over six years since I had my last baby and in that time a smart bassinet called the SNOO has come on the market. This is your baby that helps our babies sleep. Did you invent this because you had endless exhausted parents needing help and sleep advice?

SNOO’s goal is to solve the #1 complaint of new parents: sleep deprivation. Half of all new parents get fewer than 6 hours of broken sleep a night—a level of sleep deprivation that causes the same mental impairment as being drunk! Sleep deprivation doesn’t just feel lousy, it also triggers marital stress, postpartum depression, accidents, and infant sleep deaths. Furthermore, it undercuts the economy by reducing a new parent’s productivity and increasing absenteeism, on-the-job accidents, and health care costs. That’s why I felt so dedicated to developing this new way to help babies— and tired parents—sleep better.

One of my concerns with the SNOO is that my baby won’t be able to self settle, that it will get so used to be rocked and soothed to sleep that at 18 years old I’ll be having to rock a man baby to sleep. Can you set me straight, please?

One of the key questions parents ask about SNOO is, “How hard is it to transition babies to a cot from a SNOO?” It’s not hard at all! Every baby is unique and some take a bit longer to wean motion than others from a SNOO bassinet. But, a 5 or 6-month-old infant’s brain is much more mature than a newborn’s and can sustain long, continuous periods of sleep without the need for rocking or swaddling (they still sleep better with white noise). They naturally outgrow their dependency on the motion. So, have no fear, your baby simply cannot get addicted to SNOO’s motion! Your baby has come a long way and is finally mature enough to transition to the cot without motion.

What makes the SNOO the smartest and safest bed on the market?

SNOO adds 1-2+ hours of sleep per night for babies and their tired parents. Sleep deprivation can lead to unsafe sleep habits, like falling asleep with the baby in bed or on the couch or putting babies in an unsafe sleeper or unsafe sleeping position out of desperation. SNOO also has a unique design that keeps babies safely on their backs for all nights and naps when used correctly. Our swaddle securely attaches to the bed to prevent your baby from rolling into risky positions.

If you would like to know more information about the SNOO you can check out the website here.

I was gifted a SNOO to review and was encouraged to give my honest feedback so please note that everything I have written is all my own words and experience. Mxx