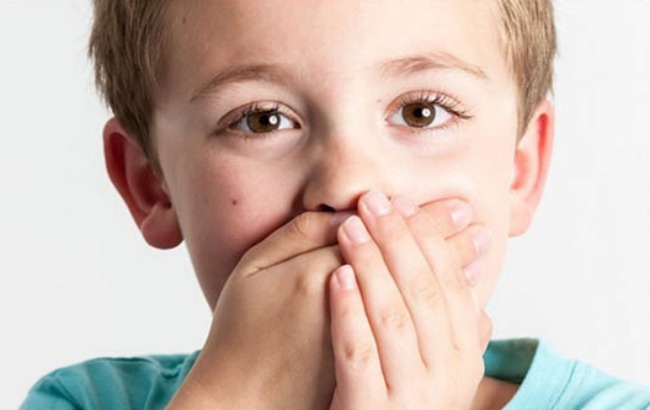 It’s tricky when you’ve got a bit of a potty mouth and you become a mum or dad to a little person. A swearing parent never looks great, yet for so many of us, it’s just part of our everyday language. Right or wrong, there’s no doubt that switching up your ‘For Fuck’s Sakes!’ to ‘Gosh Dang Its!’ can take a lot of practise and mindfulness.

Whether or not you choose to swear in front of your kids and/or allow them to swear is a decision that is yours alone, but the general consensus is that it belongs in the ‘inappropriate’ basket. But a recent book called Swearing is Good for You: The Amazing Science of Bad Language by neuroscientist Dr Emma Byrne claims that swearing in front of your kids is beneficial and kids should be exposed to a bit of foul-mouthed language by around the age of two. The idea behind it is that as parents, we should be teaching our kids to swear by telling them the meanings behind the words and the right situations to use them in. 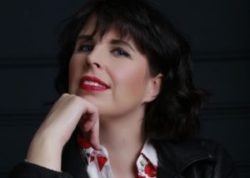 Dr Byrne said, “I want to equip parents to cope with that moment of shame and embarrassment if my kid swore in a place that was inappropriate.  Instead of saying, ‘we are going to shut this conversation down,’ talking about why that is inappropriate.”

“If we don’t talk about swearing with our kids and they learn swearing just from their classmates on the playground, they’re not going to have a sense of how swearing affects people’s feelings.”

Adding to this, Dr Byrne also said that we should be teaching our kids the impact of all words, especially those like “ugly” and “stupid” and how they affect others, not just swear words. 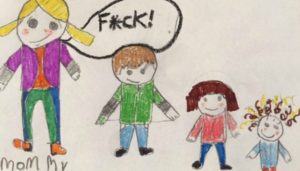 My kids totally could have drawn this

This makes total sense to me, but I also don’t think you need to sit your kids down at age two and teach them all the bad words and then tell them why they’re not allowed to use them. I know kids are smart these days, but I reckon your chances of a two year old computing the logic and reasoning behind what you’re saying is zero.

Look, I’m no angel when it comes to swearing in front of my kids. I do it a lot. Not only that, we also listen to a lot of music that has swearing in it too. But I’ve gotta say, my kids don’t swear. Right now, I explain it to them by saying that there are words that kids aren’t allowed to say, in the same way that they can’t do things like drive cars or drink alcohol, so I think they actually believe it’s illegal, which is pretty funny. However, when they do start to swear (which no doubt they will), I acknowledge that they’ve learnt those words from me and hopefully, in some weird way, they’ve learnt to use them ‘properly’. I never direct my swearing AT them, or anyone really, but if I’m honest, they’re used in moments of frustration (like the ‘for fuck’s sake’ that comes out when I drop a raw egg on the floor) or in humour.

I think the main lesson to teach our kids is to be kind and that encompasses lots of things, like not directing swear words at someone in an aggressive way via name-calling or anything in the realm of nastiness. And like Dr Byrne says, this also counts for the non-sweary ones like “stupid” or “useless.” At the end of the day, I reckon most of us know what we’re doing, know what our kids respond to best and if we teach them to be kind humans, a slip-up of a ‘shit’ or ‘fuck’ isn’t going to kill anyone.

Do you swear in front of your kids?

Have you heard our chat with former Cosmo editor Bron McCahon? It’s excellent, and now available in podcast form below. You can also watch the vids of this chat here and don’t forget to come hang with us by subscribing to our podcast here.