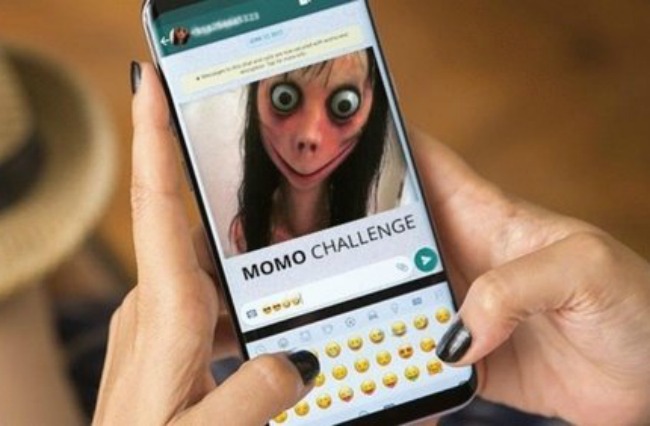 Who the hell is Momo and why are kids across the globe scared shitless by it?

As someone who spends 90% of her time online, I was totally blindsided by this whole Momo fiasco. It was only on Friday when I picked up my kids from school that I became aware of the frightening ‘challenge’ that has kids – and parents – shaking in their online boots.

Literally five seconds after throwing his schoolbag into the backseat, my eight-year-old son yelled, “Mum, I am NEVER looking at my iPad again! Momo breaks into videos and is telling kids to do really bad things and it’s scarrrrrry.” My first thought was, ‘Who the hell is Momo?’ ‘Cos it sorta just sounds like the name of your next door neighbour’s fluffy Pomeranian to me. I didn’t have to press him much to find out that it was the height of convo on the monkey bars at playtime and one of his mates told him that she’d seen Momo come up on a video she’d been watching on YouTube. It was what he said next really caught my attention: “They said that Momo tells them to stab themselves in the neck and swallow batteries and stuff.”

A quick Google and an image of the most freakin scary image of a woman’s face on a bird-like body that’ll haunt my nightmares forever clued me in on the whole Momo sitch. 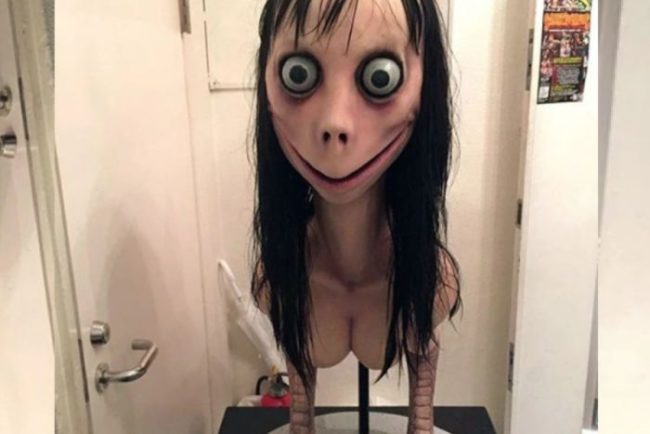 the ‘mother bird’ sculpture at the centre of the momo challenge

The thing is, the conflicting reports around this make it tricky for us parents to navigate what is real and what is not. According to some parents, their kids have been caught unawares during an ep of Peppa Pig on YouTube (even YouTube Kids) when Momo, the freakishly horrifying chicken-lady’s face, has appeared mid-vid and commanded them to do the most awful stuff; from turning on the hotplate burners at home, to self-harming and even suicide. It reportedly began on WhatsApp and has filtered through to vids specifically targeted at small kids via Peppa, those Kinder Surprise unwrapping vids, Ben and Holly’s Little Kingdom, Fortnite and loads more.

Here’s what we know: 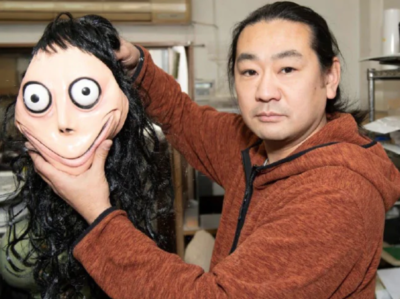 the creator of  mother bird, aka momo, keisuke aiso

‘Momo’ is actually a sculpture called Mother Bird created by Japanese sculptor Keisuke Aiso. In light of the recent controversy and to help alleviate fears, Keisuke told The Sun that Mother Bird has been destroyed and no longer exists. “The children can be reassured Momo is dead – she doesn’t exist and the curse is gone,” he said of the sculpture he created using rubber and natural oils. According to Keisuke, it was binned last Autumn. YouTube have also responded in a statement saying, “After much review, we’ve seen no recent evidence of videos promoting the Momo Challenge on YouTube. Despite press reports of this challenge surfacing, we haven’t had any recent links flagged or shared with us from YouTube.”

What is important to keep in mind are the countless reports that state that the Momo Challenge is a total hoax; a prime example of the media machine in overdrive. The only thing to drive the propellers even faster is when pop culture ‘icons’ like Kim Kardashian post to their 129 million-strong Insta following about it, fanning the flames from a small bonfire to a raging inferno.

On today’s ep of the 3pm Pick-Up, Monty and Bec Judd spoke to eSafety Commissioner Julie Inman Grant to clear up the whole ‘Momo Challenge’ situation. Have a listen below…

Now, I’ve got two kids aged 10 and eight, and here’s my two cents worth: OF COURSE we need to be aware of all the stuff that’s going on with Momo and the potentially devastating effects it can have on our kids. However, the massive media coverage this has sparked has only made things worse. Kids have caught wind of the media coverage, maybe even Googled or shared images of Momo, and that’s where the real problems begin. It rules lunch time chat, become urban legend, and before you know it, you’ve got kids refusing to be alone in their bedrooms because they’re scared that Momo is coming to get them. Worse yet, it puts ideas in the heads of fucked-up individuals who thrive off this shit and try to emulate it.

There is definitely something to take from Julie’s chat with Monty and Bec, which is staying vigilant about what our kids consume online. I’d be lying if I said I didn’t use YouTube Kids as a babysitter for my two – not even on the occasion, but regularly on weekends, so if anything this has made me more aware of monitoring their usage a little more closely. Because it’s so easy to get complacent. Where once I would beg them to pop on their headphones so I didn’t have to listen to StampyCat talk about the latest Minecraft world he’d created, I now tell them that headphones are a no-go so I can listen in to what they’re hearing – even though it makes my ears cry aural tears of frustration.

It’s a whole new world for those of us who didn’t grow up with the Internet and are raising kids who are consumed by it, so it’s a massive learning curve for all of us. Momo or not.

For more information and guidelines around online safety, parents can check out esafety.gov.au.

If you haven’t heard out chat with the awesome Sarah Harris, you can get it in your ears in pod form below. Don’t forget to subscribe to our pod here.