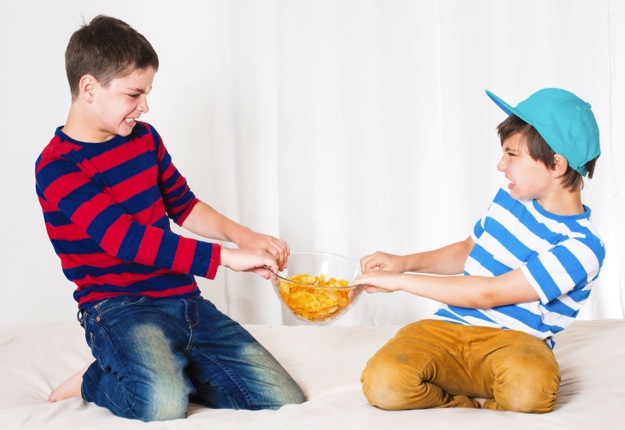 My god. I have entered some entirely new dimension now my kids are a bit older.

No longer do I have to stop the bigger one from throwing baked bean cans at the baby. I don’t have to keep an eagle eye on the eager hug that turned into a full body suffocation trap. It’s been ages since I had to explain that little cheek pinches can actually draw blood if you really put your best efforts in.

No. My kids are now at the age where they play together brilliantly all day long just like everyone said. JUST LIKE EVERYBODY FUCKING SAID. “Have another one!” They said. “It’ll be great!” They said. “Imagine how lonely she will be without a sibling.” They said.

Well, FUCK YOU to everyone who said any of the above. 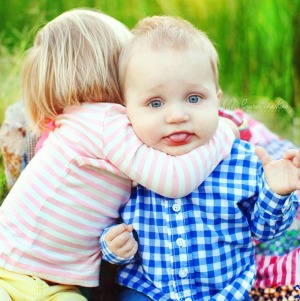 This looks cute…but that grip is like a little vice!

Firstly. You grow the baby while looking after another child. And when you smash them out as closely as I did, this means two under two. Which basically sucks completely if it didn’t sound so cute.The baby is born and you are flung back to square one. Except it isn’t square one. It’s two kids that somehow don’t become just twice the work, but multiply by a billion to create a little space of hell that only the parents of more than one child can attest to.

But here’s my rant. Once you get past the fear of the first child killing the second child, and nervously wondering if they do know that they may, in fact, maim so successfully that they can get to be an only child again, the real fun truly begins.

Kid 1 probably FUCKING LOVED being an only child, but your primal instinct to breed and listen to the entire fucking world suggesting that one baby is mean and selfish means you ruined their entire existence by spitting out another. You no longer have all your attention focused on them and their every whim. They’ve even had to stop eating 100% organic food and wearing 100% organic fibres, because you’ve no doubt realised that a lot of the shit you did with the first is entirely unnecessary (and also bloody expensive). So now while they are jacked up on chemicals, packet food and polyester, they get the evil rage inside. The rage that makes them want to hurt their sibling who they will only like for about 5% of their life. 3% of that time being Christmas day. 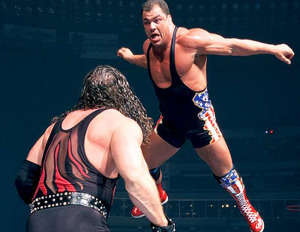 Wrestlemania matches. On the daily.

Every time I pick my kids up from daycare they have to “beat” each other. Not beat each other in the face (that comes later), but beat each other to the door, the car, the letterbox, the front door, the couch, the bath, the sink to brush their teeth. It never ever stops. I’ve tried bloody everything. But they have inherited their dad’s competitive streak, and its a hard gene to ignore.

By the time bedtime rolls around I’ve broken up 73 fights, possibly iced a welt or two, absolutely, definitely, given one or both a timeout and manoeuvred my dogs out of the way of Wrestlemania.

They do not hold back. They throw punches like blokes in a drunken bar fight. Hair is ripped at, limbs are pulled, insults are thrown. The insults sting. “You’re a nasty-poo-smell-bum-face” can scar a kid for life. My muffled laughter is probably only cementing the damage. Tensions are high.

Then the worst happens. Once bitching hour comes to a close and the energy runs out and the eggs on the head start to simmer down, the mood changes. There’s a tranquil calm that washes over what was only moments before a scene from a war movie. They hug. A hug that wasn’t demanded from me with a feverish frequency. They tell each other they are their “bestest friend in the whole WIDE world.” The L word is thrown around willingly. And they kiss and giggle as they try to get into each other’s beds.

My ovaries start to twitch. One more?

This piece was originally posted as Fuck You, Fighting Kids on FuckYouFriday.com.au, where you can read more of Far Kew’s hilarious musings.