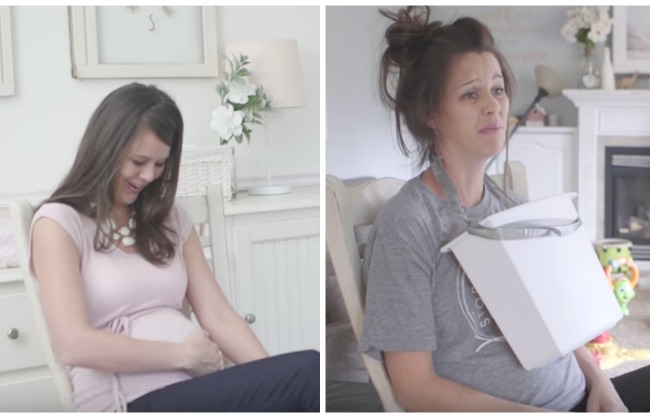 A hilarious look at a first pregnancy vs….the rest!

In my daughter’s first year of life, I’d conservatively estimate that we took about five bazillion pictures of her. I’d snap her while she was sleeping, smiling, crying, walking, laughing, eating; EVERYTHING. I’ve even got pics of her poo – and this is not even a joke. She once ate a shit tonne of blueberries and did the most epic blue poo that I had to commemorate with a pic. Weird photography aside, when she turned one I wanted something really beautiful to mark the occasion and being a video editor made the decision pretty easy – I collated all our favourite pictures and videos of our first born’s life, paired it with our favourite songs and edited the shit out it. It was so special.

The problem is, every time we watch it, my son looks over at me and asks, “Mum, where’s my movie?”  “Oh, it’s on my computer and I have to put it on a USB, I’ll do it and we’ll watch it together really soon, ok?” I don’t have the heart to tell him that I never made one for him because, well…he is the second child, and the luxury of empty time just wasn’t there after he came along. Everything was different the second time around; I was way more relaxed and to be honest, not as consumed with whether the baby growing inside of me was lemon, orange or grapefruit sized. I just cared that he was healthy and the rest of the time was spent parenting his big sister, who was only two when he was born. Her young age meant double the nappies, double the naps and basically, double the work. No one was wiping their own bums yet, getting their own snacks or even putting their own shoes on, and the ‘free’ time I did have was spent trying to get some paid work done and doing 398 loads of washing every day.

I’m going to make a big ol’ assumption here, but I reckon this is pretty common for second and subsequent kids. As mums our hands are – literally – too full to do the stuff that we did the first time around and our minds are even more overcrowded. While this did weigh on me when my son was really little, I soon realised that, well, them’s the breaks. He may not have had a freshly painted room with delicate wallpaper or first-run of the high chair, but he got the same amount of love and care as his big sister. And eventually, I’ll get around to doing that video for him. Eventually.

We LOVE this vid by Esther Anderson from Story of This Life that hilariously sums up the differences between the ‘first pregnancy vs the rest.’  Funny and SO true!

Did you relate to this?

You can listen to our chat with mum of FOUR, Bec Judd, below. Head on over and subscribe to our podcast here and watch the vids here.