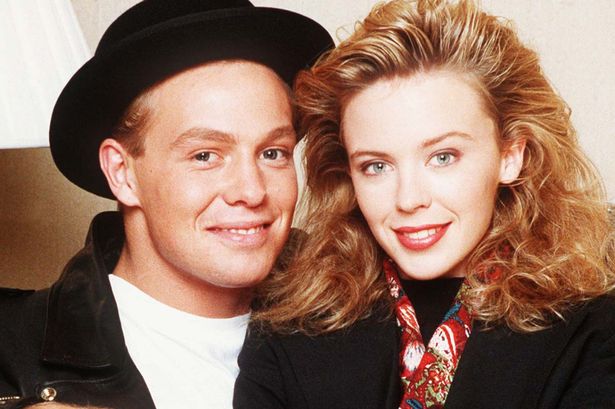 Kylie Minogue is 50, FIFTY!! And while the dame celebrates this milestone birthday,  let’s take a look back at some of the most memorable moments of her life and career that have kept us charmed, captivated and dancing in the aisles.

Because she is OUR pop Princess and you will bow down, bitches!

Scott and Charlene’s wedding is regularly voted as one of the most memorable scenes in Australian TV history!!!

(And I’m not gonna lie – Kylie & Jason’s ‘Especially For You’ is still one of my all-time fav duets – this shit is classic.

“I mean he was uber, uber famous. He was an icon already. And he was in the middle of the audience, just gazing up at me, and just willing me, willing me with all of his heart and his love to do well, and he believed in me and it was a time when so many people didn’t.”

“I had so many firsts with him. I’d never met anyone like that. Let’s just say I was 21 and my eyes were open to the world.”

Fast forward 12 years, and Kylie made a brief but memorable appearance as The Green Fairy in Baz Luhrmann’s ‘Moulin Rouge’, a character that was originally supposed to be a ‘long haired muscle man’, voiced by Ozzy Osbourne! A solid re-think on that one, Baz.

And let’s not forget her scene-stealing cameo as Brett and Kim’s daughter Epponnee-Raelene Kathleen Darlene Charlene Craig on ‘Kath and Kim’. Sporting a Charlene-esque perm, Kylie appears in a dream sequence as the characters imagine what a grown-up Epponnee-Rae would be like getting married and the result is hysterical.

Minogue’s legal team clapped back, calling Jenner a “secondary reality-television personality” – OUCH! Our Kylie was quick to point out that it was obviously lawyer-speak and that those words had not come from her. Whilst making it clear that the fight was not personal, she proved that you can still be a lady whilst fighting for what you deserve.

The two teams managed to resolve the dispute out of court, with our Kylie saying things will now be clear whether it’s a Kylie Minogue product or a Kylie Jenner product.

– Kylie Minogue was in the middle of her Showgirl tour in 2005 when her world came crashing down. Feeling a lump in her breast, she was diagnosed with breast cancer at just 36.

Kylie cancelled her tour and began treatment in Paris, losing her hair thanks to rounds of radiation and chemotherapy.

Monty chatted to Dannii about Kylie’s cancer On The Couch.

You can listen to our On The Couch chat with Dannii below and make sure you subscribe to our pod here.