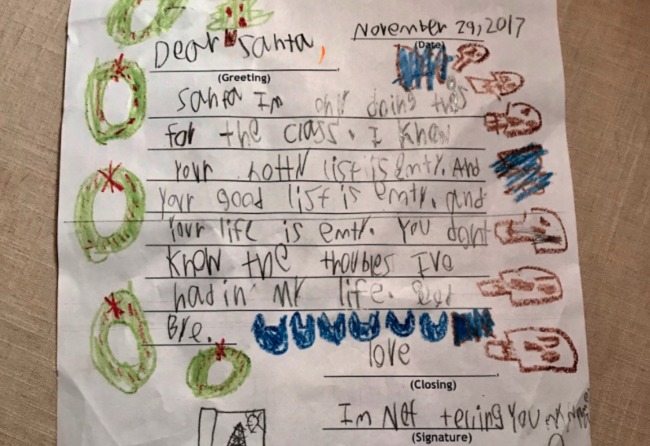 This kid’s letter to Santa has the internet in hysterics

Last year, I did something that took the sparkle right out of Christmas for my daughter. Less Grinchy and more mistake-y, but a huge fuck-up on my part nonetheless. It was about 2am on Christmas morning and I was frantically wrapping gifts (cos I like to live on the edge) and mindlessly shoving the shopping bags into one big bag that I later threw at the bottom of the pantry for recycling. Christmas morning came and went and it was a couple of weeks later that I asked my daughter (who was eight at the time) to grab me an empty bag from the bottom of the pantry. I thought it was taking her a while, so I craned my neck around to find her studying a piece of paper inside the pantry. She looked up and we locked eyes and I knew in that moment that I had officially ruined Christmas.

“Mum, why is there a receipt in here with all my Christmas presents on it?” Farrrkkkkkkkk. It was a stand-off. It was like a Freaky Friday situation, where she had become the parent and I was the guilty-faced kid just staring back at her like an IDIOT with no answers. So I did what I usually do in confrontational situations and you know, just ran away. “Hang on a sec, I think the washing machine is finished, I’ll get back to you in a minute,” I said as I locked myself in the laundry and tried to regain my composure. I opened the door and she was standing right there, receipt in hand, demanding answers. “Hmmm, I’m not sure sweetie, maybe the elves didn’t have enough time to make all the presents this year so they had to stop by Target to finish off?” She wasn’t buying it, but she let me off the hook by just walking away and we never spoke about it again. Until last week.

She looked up and we locked eyes and I knew in that moment that I had officially ruined Christmas. 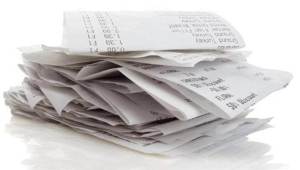 Don’t let these bite you in the arse like they did me!

“The kids at school are saying Santa’s not real,” she tells me as she gets out of the shower. “And….remember last year I found that receipt? Santa doesn’t shop at Target. Just tell me the truth.” So again, I ran away. This time, I fled downstairs to my husband, “What do I do? She remembered the receipt! She doesn’t believe! What do I say?” He was THRILLED. “Good. I’m sick of that bastard getting all the credit for the stuff WE buy. Tell her!” So seeing as I was in the middle of a kid demanding answers and a grown-up who was acting like a kid himself, I went back upstairs and confronted to situation. “So, what do you believe?” I asked her. “I don’t think it’s real. Seriously mum, a man in a sleigh with flying reindeers going around the world in one night? I knew it wasn’t real when I found the receipt.” That fucking receipt.

I was waiting for the hysteria that never came. There was something that instantly grew up inside of her in that moment; less devastated than I expected and more excited to be in on a grown-up secret. I could have kept insisting that it was real, but she’s a pretty mature kid and I knew she’d throw that lie in my face as soon as she had more proof. So after a ten minute convo and a warning that if she breathed a word about it to her little brother she’d be waking up to rocks and potatoes under the tree, we hugged it out and life has moved on – and she’s still excited about Christmas.

The thing is, all kids are different and some believe in Santa for ages and others just ain’t buying it from a very young age. NPR reporter Sarah McCammon’s six-year-old son falls into the latter, with a Santa note that has left the entire internet in hysterics. When asked to write a letter to Santa at school, Sarah’s son made a border of wreaths and skulls and wrote the most epic letter we’ve ever seen. This is Christmas GOLD. 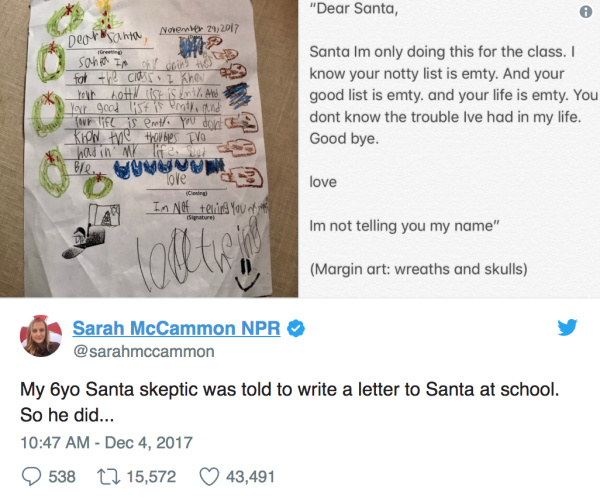 He’s not buying it. He’s not even divulging his name. This kid is our hero. And as for his ‘troubles?’ Sarah cleared that up too…

And just a word of warning, if your kid is the opposite of this little guy and worships Santa with the fire of a thousand suns, throw out those receipts IMMEDIATELY. ‘Cos accidents happen.

Our chat with the gorgeous Chrissie Swan is ready for you to listen to in pod form below! If you love it, head here to subscribe to our podcast, where you’ll find heaps of On the Couch and Show+Tell Radio chats to keep you entertained while you’re on the go.

Show+Tell Radio airs nationally on the KIIS network from 9-10am on Saturday mornings and is proudly brought to you by AAMI.