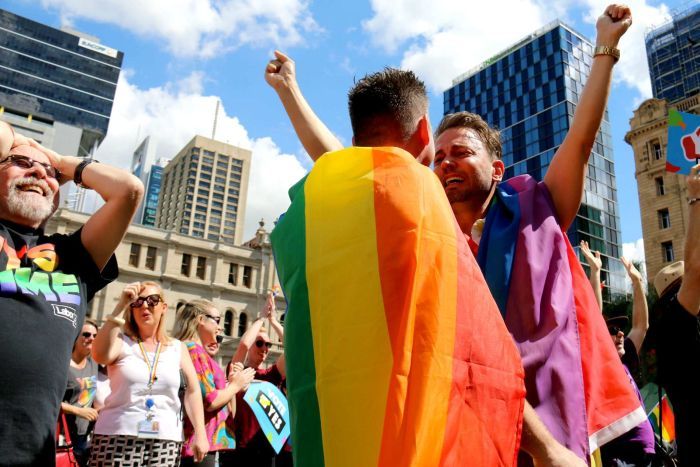 Australian public are legends and vote YES to love

Just after 10am this morning, I was sitting in my car at a red light listening to the same sex marriage postal vote results being read out on the radio. When it was revealed that 61.6% of Aussies voted YES to changing the laws to allow same sex marriage, I looked over at the car on my left and the one on my right and we all whooped in pure joy; the guy in the grey Kluger to my right even fist pumped the air. As the lights changed and I drove along, every car I passed in those next couple of minutes had a smiling driver…because today is a bloody good day. It’s actually a BEAUTIFUL day – because today, love literally wins in Australia. 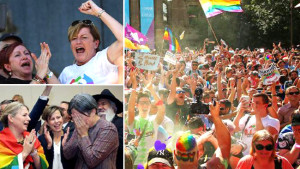 For the first time in as long as I can remember, the next hour of phone calls were all excited, happy, goose-bumpy ones. No bad news, no sad voices; just real and shared excitement that as a country, the majority of us believe in equality, in justice and in the right to marry the person we love. Finally. And I’m gonna ride this rainbow wave of delight and happiness for as long as I can because feeling this good and seeing so much happiness around me gives me all the feels.

A quick round-up of how Australia voted –

– Every single state and territory had a majority YES vote, with all (except NSW) getting over 60%

– Melbourne and Sydney tied in the highest YES votes across the country at 83.7%

– 133 out of 150 Federal Electoral Divisions resulted in a majority YES and only 17 recorded majority NO.

Here’s a visual of YES votes across this beautiful country… 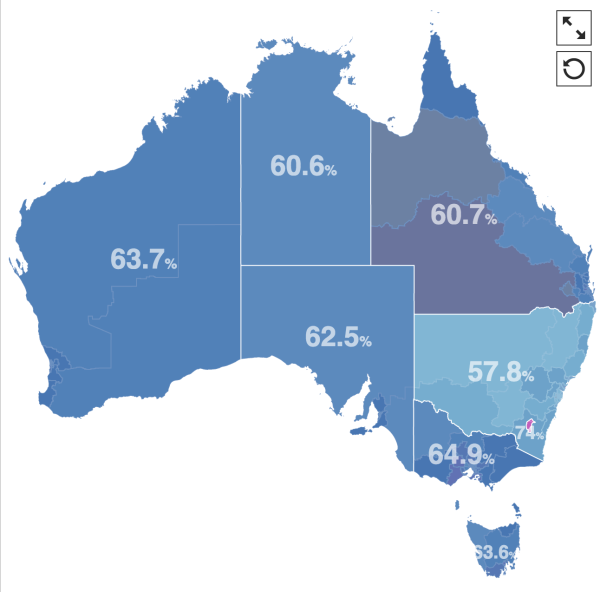 As much as it pains me to throw any kind of shade over our rainbow; while the postal survey results showed exactly how passionate the majority of us are about marriage equality, it technically doesn’t change anything. But our PM reckons that same sex marriage should be legal by Christmas this year and it is his job to “deliver it.”

Malcolm Turnbull said, “It is up to us here in the parliament of Australia to get on with it, to get on with the job the Australian people have tasked us to do and get this done.

“We asked them for their opinion and they have given it to us. It is unequivocal, it is overwhelming. It is our job now to get on with it … It is fair. The people have voted yes for marriage equality. Now it is our job to deliver it.”

I’m gonna ride this rainbow wave of delight and happiness for as long as I can because feeling this good and seeing so much happiness around me gives me all the feels.

A bill to change the existing Marriage Act will need to be passed in order to make same sex marriage legal. As it stands, the current definition of marriage is “a union of a man and a woman,” but Liberal Senator Dean Smith’s proposed bill changes it to “the union of two people” (much better) and this has backing from the Yes campaign, the Labor party and several moderate coalition MPs. The bill also stipulates that marriage celebrants are entitled to “refuse to solemnise marriages” that are not in accordance with their religious beliefs. 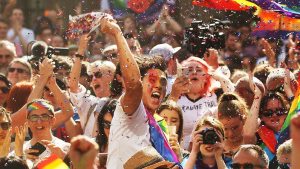 YES campaigners are said to be heading into Canberra on Thursday in the hopes of not only pushing along the proposed law change to the Marriage Act, but also ensuring that the anti-discrimination protections of old are not rolled back as the No side are gunning for.

The House of Representatives, the place where laws are nutted out, will not sit again until November 27, with the final sitting of the year being December 7. So basically, if the bill isn’t approved by then, it ain’t gonna be a reality this year. The speediness in which this legislation goes through, as explained by law lecturer Ryan Goss, sits with the “internal politics on the conservative side of parliament.” Once the bill has been presented -and debated – in the House of Reps and (fingers crossed) gets approved, the Governor-general will be the one who officially signs off on that bad boy, making same sex marriage well and truly legal. Hooray.

How quickly actual ceremonies will be able to take place is unknown, with Mr Goss saying, “It will depend on how parliament frames when it comes into force. It could be a matter of days or could be months to give celebrants time to make arrangements.” Additionally, any couple wishing to tie the knot has to give 30 days notice under Aussie law, so by the time you take that and all the parliamentary stuff into consideration, we might not see the first same sex marriage on home soil until a couple of months into 2018.

But for right now, let’s put aside the uncertainty of the future and even the bullshit of having had a postal vote in the first place, and just rejoice in the fact that for once, we are standing together, supporting one another and making it known to the leaders of our country – and indeed the world – that Australia is a place that believes that love is love. How fucking glorious.

Dannii Minogue has a massive connection with the gay community and she talked about how important it is to her below. Whack on some headphones, have a listen, then head here to subscribe to our pod.