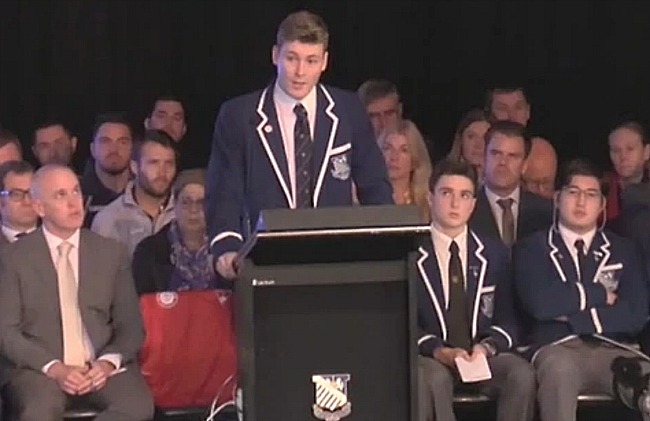 The Aussie student’s speech the whole world is applauding

If you’re feeling a bit bogged down in the daily tidal wave of depressing shit clogging your news feed, then this little ray of sunshine will pep you up a bit.

Finn Stannard is a student at St Ignatius’ College, a Catholic boys school in Sydney, who has caught the world’s attention with this incredible keynote address he made in June. In front of 1500 of his fellow classmates, teachers, parents and principal, Finn told the crowded auditorium that he’d been working towards his speech for four long years. He took a deep breath and said something that could resonate with every single one of us:

“Announcing yourself to the world is pretty terrifying, because what if the world doesn’t like you?”

And then, he told them he was gay.

Take a look at this legend in action…

Finn told ABC’s 7.30 that in the four years since he was 13 years old, he gained an understanding of himself and the person he is… but coming out still wasn’t easy.  “Telling friends was difficult and came with a lot of anxiety,” he said. “My main fear was no longer being accepted or losing my friends and being the subject of derogatory jokes.”

Finn’s decision to publicly acknowledge his sexuality was solidified when marriage equality was finally passed in Australia late last year. echoua. He told SBS, “When the results of the plebiscite came out, that’s when I knew that I could do the speech and it would be alright in the end.” 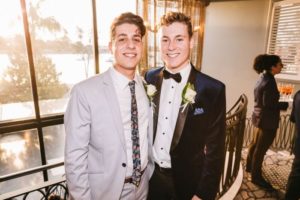 Finn and his boyfriend, Thomas

The bit that made my goosebumps stand to attention isn’t that Finn came out as gay. It isn’t even that he announced it in front of that auditorium. It was the reaction he received from all the people watching on; a standing ovation, supportive claps on the back and a sea of smiling, proud faces. And then, Finn took his boyfriend to the school formal.

To me, this is a sign that things are FINALLY changing. And it’s about bloody time.

While there are still ongoing (and screwed-up) debates as to whether religious schools should reserve the right to hire and fire employees based on their sexual orientation, the response from Finn’s school principal, Dr Paul Hine, is a breath of fresh air. He told SBS, “I’m not sure anyone chooses their sexuality, that’s who they are and therefore we need to be open to that and to accept it and to make sure we live in communities of inclusion – and with that will come diversity. Certainly that’s the case in the world beyond so in my view that should be the case in schools.”

I really hope in the future we don’t need to applaud kids for saying they’re gay, because it shouldn’t make a difference whether they are or not. It’s a non-issue. However, there’s still a lot of stigma out there and until we get to the place where it just doesn’t matter at all, our kids need more role models like Finn and principals like Dr Hine to look up to – which is precisely why Finn made that speech.

“I wanted to do it for my younger self,” Finn said. “I didn’t have a role model in school who I could follow to help me understand who I was, how I should behave, how I should be able to be me.”

If this is our future Australia, then it’s looking pretty damn good to me. Well done, Finn. You’ve made us all proud.

Tune in to our latest ep of Show+Telling below, then subscribe here for more goodness.