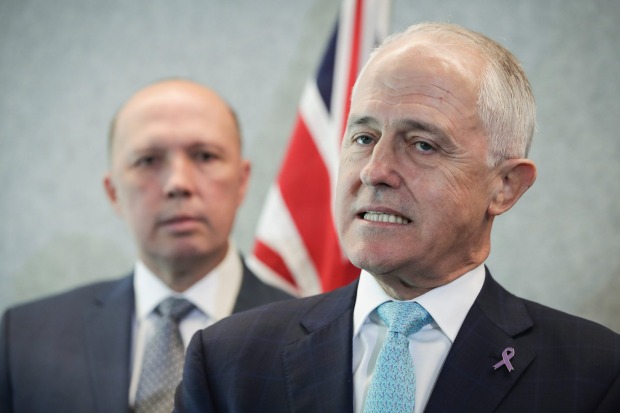 Who is our next PM and why your vote doesn’t count.

So full disclosure – I’m not fully on board with Malcolm Turnbull as PM. I kind of think he’s the sort of person that if you had a good chinwag at a dinner party, you might understand his position. A man with far too much money to understand how freaking scary your latest electricity bill has been over winter. His arm clearly twisted behind his back by too many far right MPs. BUT at least he voted for marriage equality, plebiscite notwithstanding, and is not a complete dickhead (as far as politicians go).

So how did we get to the point that a leadership spill happened this week, that the man we voted in, like it or not, is challenged by a man who set up refugee offshore processing, boycotted the lost generation apology, and accidentally messaged a journalist she was a ‘mad fucking witch’? Dutton, a totally racist, misognistic homophobe, could be our next PM…today. FFS, this is our Trump moment.

So how did we get here and what the hell is happening?

Many of us are under the illusion that we vote in a Prime Minister at election time. This is not true. The Australia public vote in a party, however the leader of that party is up to… well the party. It has always been seen as good sense to keep who Australia voted for as leader at the time of election. However this is fast changing. Since Julia Gillard ousted Kevin Rudd, the fight for leadership has become an Australian sport. 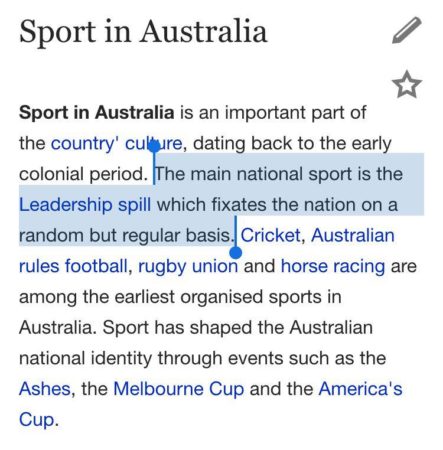 The leadership spill this week resulted in Turnbull keeping the PM position with 48 of the party members voting to keep him, in comparison to 35 voting for Dutton.

Yesterday Turnbull announced to the media that if another spill happens, which is extremely likely to happen today, he will step aside. He also said he will resign because no PM should stay in parliament once he is voted out. Cue Tony Abbott dig, who is firmly behind Dutton after being dumped in a leadership spill by Turnbull. It is highly likely by the end of today we will have a new PM, since Dutton has made it clear he has more votes this time.

It is essentially a war within the Liberal Party between the middle right and the far right.

What will happen today? Let’s get ready to rumble.

Turnbull is fighting back by saying Dutton is not able to contest the top job because he owns two childcare businesses with his wife that have indirectly received millions of dollars through the childcare scheme. He has referred the case to the Governor-General. This clearly should have been an issue before now.

Turnbull has demanded to see the 43 MP names needed to win that would support Dutton by today, and if so he will move towards a spill motion. If this happens he will immediately resign, so who will be Dutton’s contenders in today’s spill?

Bring on the contenders…

Treasurer Scott Morrison, urgh, has also put his hat in the ring. Everyone’s favourite pentecostal evangelist, who has even less support than Dutton, is putting his hand up for the top job. Julie Bishop is rumoured to be calling party members to see what sort of support she might have today in the spill.  I’m crossing my fingers and toes that she does win, but chances are as a divorced women who supported marriage equality and has already bucked too many trends in the Liberal party to have a chance with the right wing men voting, it ain’t likely. (Pity she’s still the best bet)

If Dutton takes leadership, Labour leader Bill Shorten, who has previously been seen as an unpopular PM contender, will be in with a much bigger chance to win at the next election. Shorten has very wisely remained quiet during the leadership spill.

Dutton is the worst of the worst and Turnbull’s greatest threat today. If voted PM by the party today be prepared for policies to move to the VERY far right. This is a person that can leave children in refugee camps dying but is not afraid to save an au pair at the airport gates.  Dutton took over as immigration minister in 2014 but before that as health minister, doctors voted him the worst health minister in Australia in the last 35 years.

Who knows what will happen if Dutton takes over, but it’s sure to involve a worse situation for refugees, low wage earners and anyone that doesn’t move in his immediate social circles. Could you imagine the phone call between him and Trump?

There’s never been a better time to ask…has anyone considered the incredible and brilliant Penny Wong for PM?