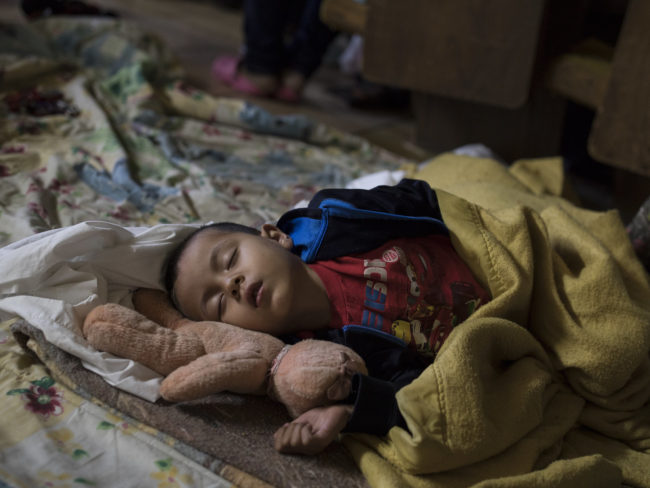 The most haunting thing you’ll hear all day

The first day I walked my daughter into childcare was awful. As a shy, quiet little girl, we thought it’d do her good to spend some time with kids her own age, without us to fall back on as her mouth piece. On that first day, she looked up at me with wide, terrified eyes, her tiny chin wobbling, and said, “Mummy, please stay. Don’t leave me.” And she started to cry. I gave her a hug, told her I’d be back in an hour, turned and left.

I sat in  my car at the front of that childcare centre and bawled my eyes out for the entire hour. When I picked her up I could see she was pretty rattled by the whole thing, so I decided to wait until she was a little older to give it another crack. I was privileged and lucky enough to have been able to make that decision and a couple of years later, we tried again. When we both felt ready.

That was one day. For one hour. And it broke me. She was safe; no one ripped her out of my arms, and we both knew I’d be back to take her to our warm home on our nice street, to her playroom filled with the things she loved and gave her comfort. This was one of my toughest parenting moments so far, but it’s almost absurd when you think about what is happening on the border of Central America and the U.S. right now. 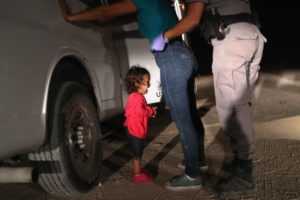 We all know how fortunate we are to live in this country, with its medical care and education and clean water, because there are many countries across the globe where parents aren’t dealing with just a few tears at childcare. They are dealing with the very real possibility that their children could become a casualty of war or extreme violence due to the turmoil happening in the country they were born in. In desperation, some parents make the illegal and dangerous decision to hop on boats to find safer shores. To cross borders before they’ve been granted permission. They do this because they are desperate. They take a leap of faith that on the other side, there will be a hand to reach out and help keep their kids safe. A hand that will give them an opportunity for a better, safer life.

But instead, at the U.S. border, the hands parents are faced with are ones that are ripping their children out of their arms as they scream and cry and beg for their parents. Over 2000 in the last six weeks. Terrified little kids are being taken from their mothers and fathers, their safe place, and left with strangers in a caged room, uncertain as to whether they will ever see them again. I cannot imagine, even in my wildest nightmares, what that must feel like for those families.

While families attempting to cross the border without formal permission have been detained under prior governments, this is the first time that children have been forcibly removed from their parents. Even in the most dire circumstances, the family unit and the right for kids to, at the very least, be allowed the comfort of their parents, has always been respected and observed. Until now.

That fact is, this is not a political issue. It is a human rights one. 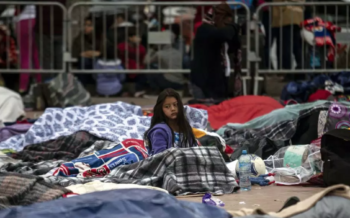 This is what happens when you give an entitled, egomaniacal businessman and reality TV star the most powerful job in the world. What did we think – that he’d do a good, fair job? Actually, Donald Trump is doing a GREAT job in his role as President – if you’re a white American. He’s excelling if you don’t give a shit about showing an ounce of humanity to those less fortunate than you.

Every time I see one of those kids or hear their distressed voices, all I can picture is my own kids. And if that tears you apart to think about, then you know what is happening is wrong – because it’s pure luck that it’s not you. Or me.

Anger is probably the worst way to fight it, but at this moment it feels right to say FUCK YOU, Donald Trump. Fuck you and your disgusting, abhorrent use of power. For your absolute disregard for all human life that doesn’t come from a wealthy, privileged background like your own. Most of all, fuck you for failing to have an ounce of compassion for the most innocent and vulnerable people on this planet.

Keep your ‘zero tolerance’ bullshit immigration policies. Build your wall. Tear families apart. Leave your disgusting stamp on this point in history. But know that you are despised for it the world over. I only hope that in the next election, the absolute horror you have caused will be crystal clear to the voting American public. And that you are booted out before you can cause any more destruction to this world.

*Of course, it’s not forgotten that our government here in Australia has it’s own shame to bear over the horrendous treatment of asylum seekers, which we have also covered. You can read about that here.

If you are looking for ways to help, here are some ideas:

RAICES: This Texas-based not-for-profit allows you to donate much-needed cash directly into their Family Reunification and Bond Fund. This is specifically aimed at paying the immigration bond fees for parents detained at the border, enabling them to get a step closer to being reunited with their children.

Young Centre for Immigrant Children’s Rights:  Works specifically with children arriving unaccompanied by adults at the U.S. border and have just announced a project to help kids separated from their parents under Trump’s bullshit policies.

Donate to the Asylum Seeker Resource Centre  here in Australia to help provide legal assistance, housing, food and healthcare to asylum seekers right her in Oz.