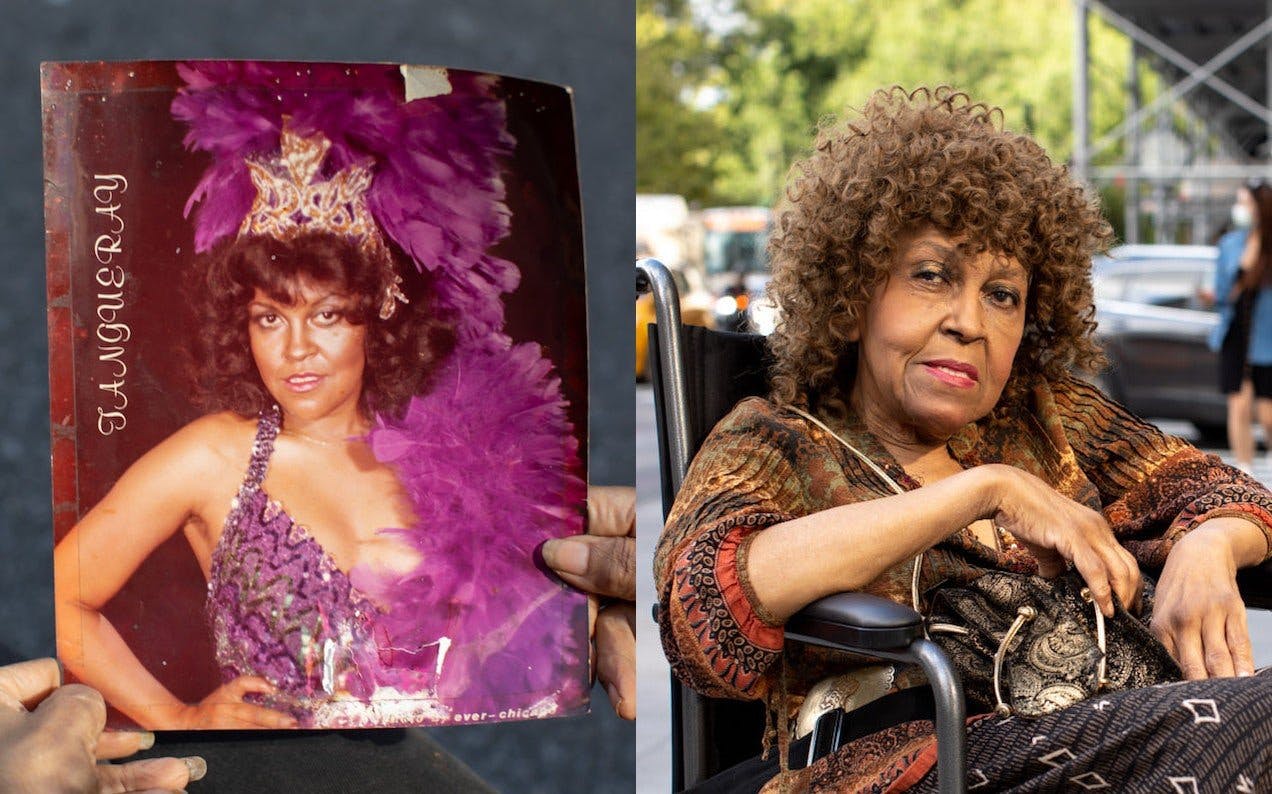 This is legit the best reading you’ll do all year

Stace introduced me to the Humans of New York (HONY) Insta page a little while back and I’ve been happily reading real people’s heartwarming, funny and and often tragic stories since then.

In all that time, I’ve never been as transfixed on a tale as the most recent – the story of Stephanie Johnson, AKA Tanqueray, one of NYC’s most sought-after Burlesque dancers back in the 70’s. Tanqueray has lived a LIFE. I mean, a dedicated 32 posts on the HONY page kinda life. It’s a life that is made up of moments that are so spectacularly triumphant, smart, funny and seriously heartbreaking that you won’t believe she’s jammed it all in to her 76 years.

“My mom threw me out of the house at seventeen for getting pregnant, then had me arrested when I tried to get my clothes. Then she fucked the head of parole to try to keep me in jail. She was some prime pussy back then. But the warden did some tests on me and found out I was smart, so I got a scholarship to go anywhere in New York. I chose the Fashion Institute of Technology, which I hated. But by that time I was already getting work making costumes for the strippers and porn stars in Times Square. All my friends were gay people, because they never judged me. All I did was gay bars: drag queen contests, Crisco Disco, I loved the whole scene. And I couldn’t get enough of the costumes. My friend Paris used to sit at the bar and sell stolen clothes from Bergdorf and Lord and Taylors, back before they had sensor tags. So I had the best wardrobe: mink coats, 5 inch heels, stockings with seams up the back. I looked like a drag queen, honey. One night a Hasidic rabbi tried to pick me up because he thought I was a tranny. I had to tell him: ‘Baby, this is real fish!”

The world couldn’t get enough. So she’s back.

(1/32) “Tanqueray, Tanqueray, Tanqueray. When this photo was taken, ten thousand men in New York City knew that name. My signature meant something to them. They’d line up around the block whenever I was dancing in Times Square, just so I could sign the cover of their nudie magazine. I’d always write: ‘You were the best I ever had.’ Or some stupid shit like that. Something to make them smile for a second. Something to make them feel like they’d gotten to know me. Then they’d pay their twenty bucks, and go sit in the dark, and wait for the show to start. They’d roll that magazine up tight and think about their wives, or their work, or some of their other problems. And they’d wait for the lights to come up. Wait for Tanqueray to step out on stage and take it all away for eighteen minutes. Eighteen minutes. That’s how long you’ve got to hold ‘em. For eighteen minutes you’ve got to make them forget that they’re getting older. And that they aren’t where they want to be in life. And that it’s probably too late to do much about it. It’s only eighteen minutes. Not long at all. But there’s a way to make it seem like forever. I always danced to the blues. Cause it’s funky and you don’t have to move fast. You can really zero in on a guy. So that it seems like you’re dancing just for him. You look him right in the eyes. Smile at him. Wink. Put a finger in your mouth and lick it a little bit. Make sure you wear plenty of lip gloss so your lips are very, very shiny. If you’re doing it right, you can make him think: ‘Wow, she’s dancing just for me.’ You can make him think he’s doing something to your insides. You can make him fall in love. Then when the music stops, you step off the stage, and beat it back to the dressing room.”

It’s been hard times for the lady with all the sass and smarts to survive and thrive in the city that never sleeps. Last year, Tanqueray had a fall and has been unable to walk since, confined to a wheelchair and living alone in her small apartment. HONY’s creator, Brandon Stanton, recently sat down with Tanqueray to transcribe her life story as part of a fundraiser to help this incredibly fierce lady out.

Brandon said of Tanqueray’s feature: “Stephanie is a born performer, so we were initially going to make a podcast out of it. But unfortunate circumstances have required a change in plans. Stephanie’s health has taken a bad turn, and she’s in a really tough spot.

“So I’m going to tell her story right here, right now. It’s the most ambitious storytelling I’ve ever attempted on the blog. It will unfold over the course of 32 posts. But if there’s anyone who can hold an audience for an entire week – it’s Tanqueray. As her story is shared, we will be raising money to ensure that Stephanie can live the rest of her life in comfort and dignity. Stephanie has a lot of urgent needs, so her care will be expensive. But her story is priceless. If the series adds any value to your life over the next seven days, please consider making a contribution to our fundraiser through the link in bio.” You can donate here.

TRUST ME that you will be drawn into Tanqueray’s life quick sticks. The last instalment was released today, which means you can go back to the first post and binge them all right now… it’s absolutely worth your time.

At the time of writing, The Tanqueray Trust gofundme page is sitting at almost $2.5 million. Amazing. You can visit HONY on Insta here and Facebook here.

If you’re keen for more nostalgia and some seriously cool ladies, then have a listen to our latest Blast From The Pre-Corona Past pod ep below. Subscribe here.