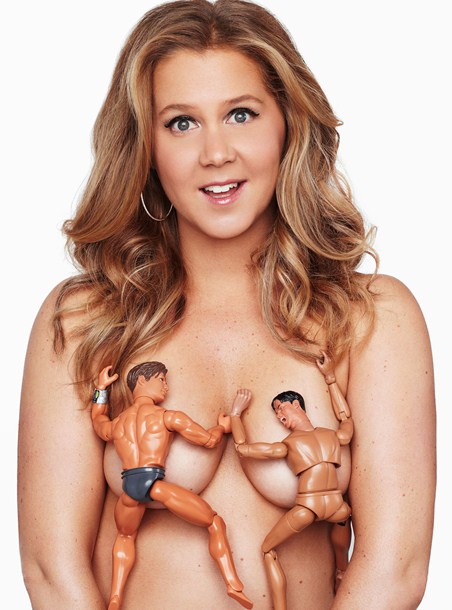 Amy Schumer is the new comedy it girl in Hollywood. She has her own hit tv series ‘Inside Amy Schumer’, her debut feature film ‘Trainwreck’ (that she wrote and also stars in) and she recently hosted the 2015 MTV Movie awards. She’s a little bit naughty, lots of funny and completely unapologetic about just being herself.

We are riding on the Amy Schumer bandwagon big time here at Show + Tell. If you are not already on board, you probably will be in about two minutes.

In the latest episode of ‘Inside Amy Schumer’, Amy stumbles across Tina, Patricia and Julia drinking wine and eating lunch in the forest, where they have a hilarious conversation about Hollywood’s double standard towards aging men and women. The best bit of the video, apart from being hugely entertaining, is that they manage to be super funny without insulting anyone.

At the Time 100 gala this week Amy deliberately fell on the red carpet right in front of Kim Kardashian and Kanye West as they posed for the cameras. “I asked my publicist, ‘Can I pretend to fall?’ and she said ‘I can’t stop you.” tells Amy. Not even a hint of a smile from Kanye. I’ll give 10 bucks to anyone who has seen Kanye smile or even smirk more than three times! 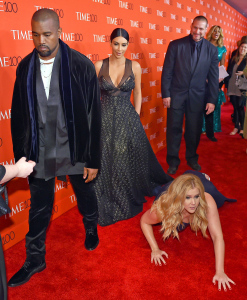 Following the release of the trailer for her new movie ‘Trainwreck’ critic Jeffrey Wells wrote on the site Hollywood Elsewhere, “Director Judd Apatow is once again introducing a chubby, whipsmart, not conventionally attractive, neurotically bothered female comic to a mass audience – first Melissa McCarthy in ‘Bridesmaids’, then Lena Dunham in HBO’s ‘Girls’ and now Amy Schumer, the star and writer of ‘Trainwreck’…there’s no way she’d be an object of heated romantic interest in the real world.” Amy hit back with some fab social media pics. 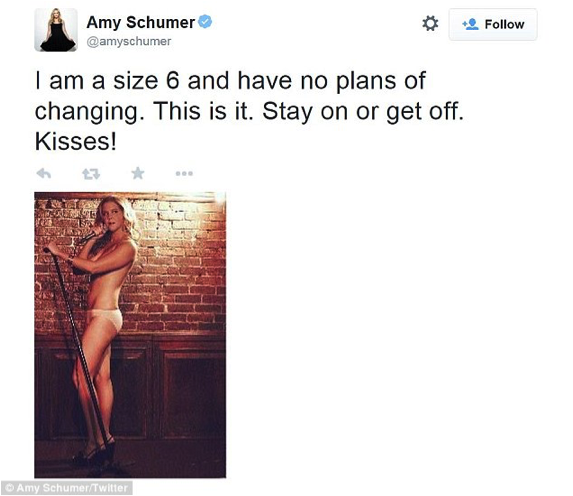 Getting her start on the US reality show ‘Last Comic Standing’, Amy’s style can be bloody confronting. In 2012 Amy said “I like tackling the stuff nobody else talks about, like the darkest, most serious thing about yourself. I talk about life and sex and personal stories and stuff everybody can relate to, and some can’t.” On the season 3 premiere of ‘Inside Amy Schumer’ she addresses the issue of rape culture in American college football with a parody of ‘Friday Night Lights’. The new coach tells his football team that his rules are “no raping” and the football team put forwards situations where rape is okay like “what if it’s Halloween and she is dressed as a sexy cat?” highlighting the culture of victim blaming.

She can leave Ellen speechless with her stories on not fitting into the LA scene, scowling resting face and popcorn eating etiquette. Anyone who can make Ellen laugh so hard is pretty bloody ace.

Are you a fan?