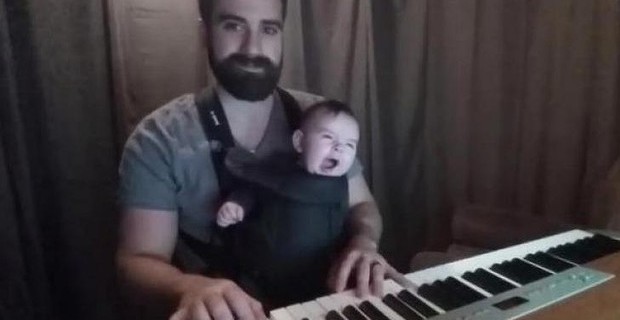 Dad putting his baby to sleep is HEAVEN

When you have a newborn that won’t sleep it’s hard to think straight, see straight or even sit straight for that matter. It feels like a nightmare that may never end. I experienced this with my little babe. For the first seven weeks of her life she thought sleep was for suckers. Turns out, I was the only sucker. But I called in the big guns (being the baby whisperer) and the rest is history. So I consider myself beyond lucky, but that doesn’t mean I haven’t forgotten those first couple of months. Because man they were tough. I tried every trick anyone suggested, no matter how ridiculous they sounded.

I can’t play the piano but if I saw this video I am about to show you in those early months, I would have jumped all over that piano like no-one’s business and given it a red hot crack.

This is beyond the realms of cute. This beautiful papa bear, David Motola, was struggling to get his son Samuel to sleep. The five month old had an ear infection and was playing hard to get when it came to the usual tricks to get bubbas to sleep, so he played him a lullaby. The little guy was out in seconds.Watching this almost makes me clucky. This is the most beautiful thing you’ll watch all day.